MILAN (October 27, 2011) – Today, the 2012 Campari Calendar, now in its 13th edition, was unveiled in Milan, Italy. Entitled It’s the end of the world, baby!,this year’s Campari Calendar takes its inspiration from the hypothetical prediction that, according to ancient Mayan culture, the world as we know it will end on December 21st, 2012. Various century-old prophecies have predicted the world may end on numerous occasions. However, all predictions have fortunately been abandoned as these dates have passed without incident, and we have continued to revel.  In this year’s calendar, Campari takes these doomsday theories and juxtaposes them with a “Toast to Life!” as presented in a series of powerful, awe inspiring photos starring Hollywood actress and supermodel, Milla Jovovich (The Three Musketeers).

This year’s 13 calendar images, captured by contemporary French photographer Dimitri Daniloff, are set to take the audience on a stunning visual voyage. The calendar showcases Campari’s latest female protagonist in vivid shots, as she encounters hypothetical scenes on how many have predicted the world could end, including Global Warming, Drought and Ice Age.   In the striking photos, Milla responds to these frightening hypothetical calamities with a counter view – instead of cowering in fear, she focuses on celebrating life by raising a toast of Campari’s magnificent red aperitif.

Posing in over-the-top couture including Walter Steiger, Yann Weber and Swarovski, Jovovich  captivates us, exuding a determined attitude and evoking the power within all of us.  The highly stylized images are sure to capture the eye, as well as the imagination. 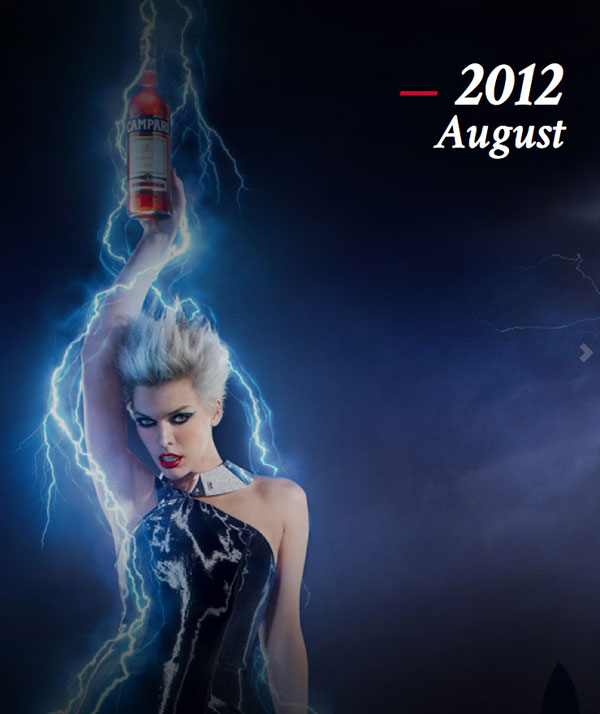 Milla Jovovich marks a return to female stars for the Campari Calendar, following last year’s first male protagonist, Benicio Del Toro. She will now follow in the footsteps of some of the world’s most stunning women who have adorned the pages of previous Campari Calendars, including Salma Hayek, Eva Mendes, and Jessica Alba. Jovovich comments on her experience, “As a model and an actress, this was an exciting new challenge for me, combining the skills to bring to life each of the hypothetical events in a theatrical, yet sophisticated way. What attracted me most to the project was the powerful inspiration behind it, as well as the positive approach of celebrating life with a special toast, with friends and family.”

Due to Dimitri Daniloff’s revered futuristic approach, the Parisian born photographer was a natural choice for the brand in shooting this provocative story. “I relish the opportunity to work with raw ideas like this, so when Campari briefed me on the inspiration, featuring a world of fantasy, it was the perfect project for me.” Daniloff said,  “I wanted to interpret each scenario in the most positive light and I really saught to recreate the events in a surreal and very choreographic way.”

CEO of Gruppo Campari, Bob Kunze-Concewitz noted, “It is our mission as an aperitif to offer Campari lovers an intense, positive moment during this time, to celebrate whatever may happen and make a toast to life. With Milla’s mysterious, intriguing style, she was a perfect choice as the interpreter of this concept. Additionally, there was no one better than Dimitri to bring to life the mystery and fantasy that inspire the images.”

Campari, as a longstanding patron of the arts, utilizes the yearly calendar to exemplify their continual commitment to pioneering groundbreaking advertising campaigns and acclaimed artistic images and has collaborated with internationally renowned photographers such as Mario Testino, Mathew Rolston, Jean Paul Goude and Michel Comte on past calendars.  The Campari Calendar, of which only 9,999 copies are printed, will be exclusively distributed to friends of Campari internationally. The concept of It’s the end of the world, baby! was created by Euros RSCG Milano. Working alongside Dimitri Daniloff on the project was creative directors Eric Loi and Dario Villa, led by executive creative director Giovanni Porro. The executive production was executed by SeaSun Production.

For more information go to:

About The Campari Calendar

The Campari Calendar is one of the world’s iconic artistic calendars. Distributed intertionally in limited edition of only 9,999 copies, it is a small, collectible luxury for the happy few that receive it, and is a tribute to the world-class talent and photographers that make it come to life every year.

Campari is a contemporary classic. The recipe, which has remained unchanged, originated in Novara in 1860, and is the base for some of the most famous cocktails around the world. Campari is an alcoholic spirit obtained from the infusion of bitter herbs, aromatic plants and fruit in alcohol and water. With its distinct colour, aroma and flavour, Campari has always been a symbol of passion that expresses itself in terms of seduction and sensuality. These are the values that have made the Campari brand famous throughout the world as an icon of Italian style and excellence.

Skyy Spirits was founded and is headquartered in San Francisco, California.  More information on the company can be found at www.skyyspirits.com, www.facebook.com/skyyspirits, Twitter: @SkyySpirits and www.camparigroup.com.  Please enjoy Skyy Spirits brands responsibly and in moderation.

Davide Campari-Milano S.p.A., together with its affiliates (“Gruppo Campari”),  is a major player in the global beverage sector, trading in over 190 nations around the world with a leading position in the Italian and Brazilian markets and a strong presence in the USA and Continental Europe. The Group has an extensive portfolio that spans three business segments: spirits, wines and soft drinks. In the spirits segment its internationally renowned brands, such asCampari, Carolans, SKYY Vodka and Wild Turkey stand out. It also has leading regional brands including Aperol, Cabo Wabo, Camparisoda, Cynar, Frangelico,Glen Grant, Ouzo 12, X-Rated Fusion Liqueur, Zedda Piras and the local Brazilian brands Dreher, Old Eight and Drury’s. Its wine segment boasts the global brandCinzano, as well as important regional brands including Liebfraumilch, Mondoro, Odessa, Riccadonna, Sella&Mosca and Teruzzi&Puthod. The soft drinks segment comprises the non-alcoholic aperitif Crodino and Lemonsoda as well as its respective line extension dominating the Italian market. The Group employs over 2,200 people. The shares of the parent company, Davide Campari-Milano S.p.A. (Reuters CPRI.MI – Bloomberg CPR IM), are listed on the Italian Stock Exchange. www.camparigroup.com

Milla Jovovich has successfully established herself as a highly regarded, international model and actress.  Jovovich has transitioned effortlessly to a full time actress, starring in over two dozen films. At the age of eleven, Jovovich was spotted by photographer Richard Avedon, who featured her in Revlon’s “Most Unforgettable Women in the World” advertisements. Since then Milla has appeared in hundreds of magazines and on dozens of covers. In 1994, Milla released her critically acclaimed folk album, The Divine Comedy. Inspired by a love of “elves and magic trees,” Milla wrote the lyrics at 15 and recorded the album when she was just 16. She has just wrapped production on “The Three Musketeers 3D” where she will portray “Milady de Winter.”  She appears alongside an international cast that includes Christoph Waltz, Matthew Macfadyen, Mads Mikkelsen and Juno Temple. Summit Entertainment will release this film on October 14, 2011.

Born in 1970, Dimitri Daniloff discovered his love for photography by chance while studying for a science degree when a friend gave him a camera as a gift. “To me, it was a revelation,” Daniloff remembers fondly, and it took him just one day of experimenting with the camera to discover his great passion for photography. He immediately quit his studies and started training in photography. On completion of his apprenticeship he started work as a photographer’s assistant, with the role seeing him travelling throughout Europe and the United States, before becoming an independent photographer in 1998.

Dimitri is obsessed with living in the now and pre-empting the future and his “Cubism” series demonstrates this futuristic approach, aiming to exceed the limits of the image, to reinvent and to push the boundaries. His creativity involves erudite distortions and manipulations, which have allowed him to build notoriety in the contemporary photographic world. Daniloff has adapted this digital aesthetic to foster a renewal in advertising photography, which he believes has been in crisis since the beginning of the 21st century. He is constantly working to find another subterfuge to dazzle people with. The Frenchman won a Gold Lion in Cannes 2003 with a Playstation campaign and was exhibited by the Museum of Les Arts Décoratifs, Le Louvre, Paris representing the new generation of photographers.