The impressive rise in high-quality cocktails and cocktail menus in hotels is real and it’s sustainable. But all too often there’s one substandard ingredient.

For example, the cocktail menu at a newly-opened, high-end hotel bar featured house-made mixers, varieties of bitters, fresh ingredients, high-end spirits, and even some esoteric liqueurs. But when I ordered that very special reserve whiskey, it was served with a few standard, tiny hotel ice cubes. My whiskey, instead of being chilled without dilution, was diluted without any significant chilling. Can we do better? I wanted to learn more about why and how this challenge can be overcome.

My interest in ice started last fall with a visit to one of Manhattan’s newest speakeasy concept bars, Jbird. My wife’s Collins glass had a single elongated cube (a “Collins spear”) that nearly spanned the height of the glass, enhancing both the appearance and the quality of the cocktail. I guess we should have expected the ice to be interesting, as we had passed several ice freezers while winding our way up and down stairs and in and out of elevators and service halls, working our way to the entry, which, in the great tradition of the modern speakeasy, is marked “exit.” No matter. Jbird, like most serious cocktail bars, understands that the ice component is at least as important as every other component in a great cocktail.

I had thought we were clever finding Jbird on our first attempt, but our efforts pale in comparison to Frederic Tudor’s, without whom the speakeasy’s choices might have been simply beer or wine. In the early 1800s, the native Bostonian had a vision to sell pieces of frozen lake water to inhabitants of warmer climes. He failed in his first few attempts but eventually found success, spawned an industry, and became known as the Ice King.

It’s the path to success that has relevance here. Tudor started out selling ice – seems an obvious approach. But would-be customers rejected the proposition. Why pay for something that melts in a few minutes and has never been needed before? It wasn’t until he switched gears and started promoting cold drinks that Tudor hit his stride. That’s right. Tudor almost single – handedly sparked the interest in what we take for granted today, cold drinks. At the peak of the natural ice industry, the annual harvest was 25 million tons of product.

Eventually 20th century ingenuity led to the death of the natural ice industry, but the 21st century has seen a resurgence of interest in ice. For mixologists, it’s a passion. And it should be. It’s an integral part of making a cocktail and often a part of the final presentation.

Ice can be made into so many shapes and forms. The list of tools and machines to make, shape, crack, and shave ice seems never-ending. And then there’s the science behind the recipe. Dilution rates will be influenced by the shape, size, and quantity of the ice, as well as the chilling method (shaken, stirred, and blended being most common). 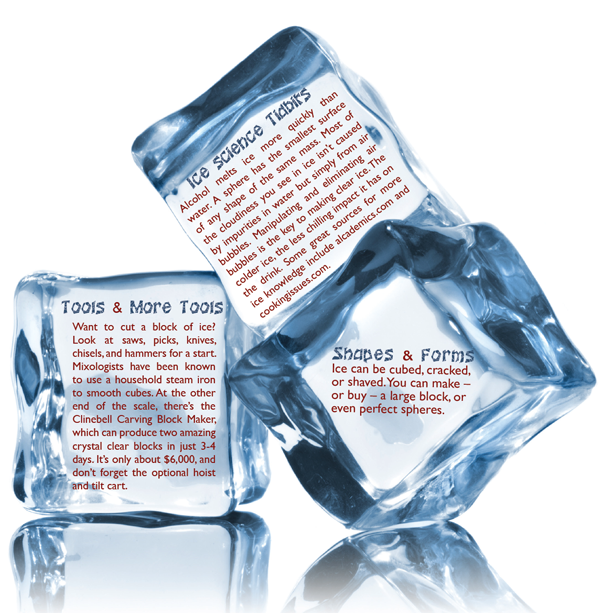