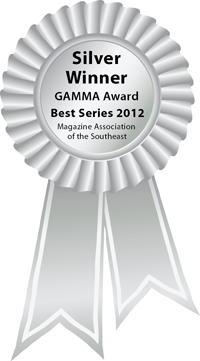 George was in Chicago to take in a hockey game and enjoy some of the windy city’s exceptional food and drink establishments. After reveling in an impressive victory by his Detroit Red Wings over the hometown Black Hawks, George found himself on Chicago’s famous Rush Street and in need of a not only a celebratory libation but also something to warm the chill of a December night. He happened into the first bustling saloon he came upon and was immediately greeted by a familiar smell. Seated at the bar, he inquired of the barman if indeed what he was enjoying was the smell of apple cider.

“That’s our Hot Apple Toddy made with homemade Rock & Rye you smell,” replied the bartender. “It is sure to warm you up, kind of like a blanket for your insides.”

George took a sip of the steaming brew and was reminded of growing up in Michigan, when he visited the apple orchards in the fall with his parents and drank hot apple cider with warm homemade cinnamon and sugar doughnuts. “This is delicious, but what on earth is Rock & Rye?”

“It’s made from rock candy and rye whiskey, with citrus and spices. We got the recipe from The Gentleman’s Companion and we make our own.”

George had one more Toddy before venturing back out into the cold Chicago night with a warm glow and a determination to discover more about Rock & Rye. He started doing some research and it turns out that at one time in history, most bars had their own recipe for making Rock & Rye, an old traditional wintertime elixir commonly believed to hold medicinal properties of sweeping proportions. Whether used to ward off sickness or to aid digestion, this interesting creation involved dissolving rock candy in rye whiskey with the addition of fruit. It would then be served neat, on the rocks, or with hot water and a slice of lemon in a toddy.

According to the Esquire Drink Book, 1956:
“Once upon a time, a person afflicted with rasp, or contemplating the possibility that he might be in the near or distant future, would prepare his remedy by putting rock candy and citrus fruit slices and peels into a jug of rye, corking, and setting it aside…The only trouble is that sympathetic friends who rush to the sick one’s bedside will want to share his medicine (which has the taste and texture of a liqueur), possibly forgetting to leave a thimbleful for him.”

After much searching, George even tracked down a copy of Charles H. Baker, Jr.’s The Gentleman’s Companion. It wasn’t cheap, but now he could get the recipe and make his own Rock & Rye. He thought this would make a wonderful gift for the holidays as well as being great for mixing with hot apple cider as a tasty cold weather warmer when entertaining friends during the season.

Start by breaking the cinnamon sticks and cloves and bruising the vanilla bean. Next make a mirepoix bag with the spices. In a large saucepan combine cider, honey, and the mirepoix bag; bring to a boil and then let cool for at least 4 hours. Remove mirepoix bag and reheat when ready to serve, adding the Rock & Rye at the last moment. Serve in heated mugs with a cinnamon stick garnish.

Put ingredients in a large container, cover, and let stand a fortnight (14 days).

For a complete list of Tony’s books, products and bar tools:
www.themodernmixologist.com