George found himself sitting at the bar at the Living Room inside the W Hotel in South Beach, sipping one of the best daiquiris ever! “So what’s your secret to this wonderful cocktail?” he asked the bartender.

“It’s so simple,” the bartender replied, “folks are always screwing up this classic. Just use great rum, the freshest lime juice, and simple syrup. Shake it to a Cuban beat and strain into a frozen coupe.”

“Well, it sure is tasty!” George said.

Just then a gentleman sitting at the bar piped up, “If you like the daiquiri, you should try their rum punch!”

George, always up for an adventure, was more than eager to try this newly-introduced libation.

“The word ‘punch’ comes from the Hindi panch, meaning five, which refers to the five ingredients used to make the drink: spirit, citrus, sugar, water (tea), and spice,” said the bartender. “Rum punch is the drink of the Caribbean. If you really want to learn about rum punch, you need to visit Barbados!”

George did not need to be told twice and quickly booked a flight to Bridgetown. Once in Barbados, George went immediately to one of the country’s many rum shops. He ordered his first authentic Bajan Rum Punch and proceeded to quickly settle into the rhythm of the island. Feeling a bit hungry from his journey, he ordered a cutter, which is a sandwich of sorts served on Bajan salt bread, filled with roast pork with cracklings and topped with hot sauce. George ordered another rum punch and inquired of the barman about the origins of this delicious tipple. 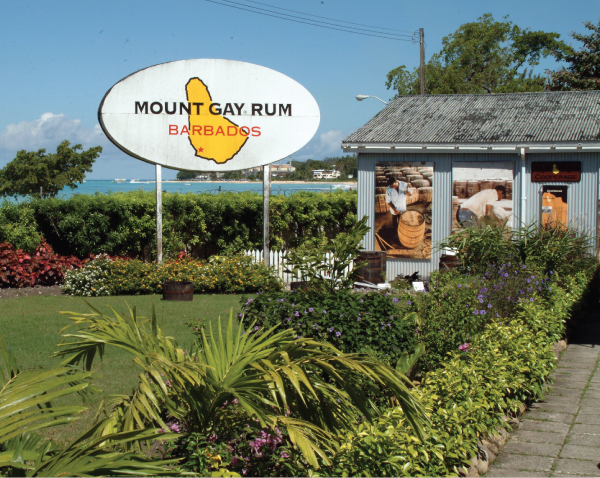 “All the islands make rum punch but Barbados is the birthplace of rum,” he said. “To truly appreciate the drink, you must first appreciate the rum. You should visit Mount Gay while you’re here. Ask for Chesterfield!”

George finished his drink, thanked the barman, and stepped out into the hot Bajan afternoon to hail a cab and head to the Mount Gay visitor’s center. Upon arriving there, George was led to the bar where he was greeted with a friendly reception and a tasty rum punch. “Is Chesterfield in today?” he asked. The barman left and quickly returned with a gentleman he introduced as Chesterfield Brown. “I understand you are the man to talk to when it comes to rum.”

Chesterfield explained that rum originated on the island of Barbados. A document from 1651 stated, “The chief fuddling they make in the island is Rumbullion, alias Kill-Devil, and this is made of sugar cane distilled; a hot, hellish, and terrible liquor.” Written proof dating from 1703 makes the Mount Gay Distillery the oldest operating rum producer in the world.

George thanked Chesterfield for sharing his knowledge and passion and inquired about a great place for local, regional cuisine. Chesterfield recommended eating at The Ship’s Inn in Christ Church. “Make sure to try the flying fish!” he said.

George started with a plate of Bajan fish cakes paired with rum punch, and followed up with fried flying fish served with cou cou, macaroni pie and another rum punch. It was a great day in Barbados, and George knew that he would spend the summer months entertaining with rum punch and savoring the warm memories of this special island.

An old poem for creating Bajan (Barbados) rum punch; “One of sour, two of sweet, three of strong and four of weak, a dash of bitters and a sprinkle of spice, served well chilled with plenty of ice.”