This month we venture into our nation’s capital to see what’s happening with our country’s movers and shakers. While many of our founding fathers were known to imbibe an occasional cocktail, they would be surprised to find just how many hotspots there are today in the district.

In a bustling city with a multitude of hotel, restaurant and bar options, Kimpton Hotels offers Rouge, one of the most exciting hotels in the district. Located near trendy DuPont Circle, “fun, exciting and glamorous” are just a few of the adjectives used to describe this property. Hotel Rouge matches this excitement with a bar offering equal to that description.

Kimpton’s Bar Rouge first opened its doors over a decade ago and is now proud to introduce a new design and menu. Located at 1315 16th St. N.W., adjacent to Hotel Rouge, the longtime fixture on the hotel lounge scene was re-launched last year as a neighborhood wine bar offering a global wine list, seasonal small plates and handcrafted cocktails.

The wine menu features a tailored list of 50 wines from around the world, handpicked by Kimpton’s master sommelier, Emily Wines – yes, you read that right – and Bar Rouge’s manager/mixologist, Rico Wisner, formerly of Poste Moderne Brasserie. The selections are offered in three pour sizes, with all standard pours under $10. “Our goal is to offer wines that are hot yet approachable, and that over-deliver on value,” says Wisner. Examples include the Paco & Lola Albarino and the Mas Guiot Rose, as well as a selection of Wisner’s favorite “local and funky” wines, such as the Keswick Verdejo from Charlottesville, Va., and the Vint Hall Cabernet Franc from northern Virginia. The bar offers a diverse menu of craft and local beers, such as Heavy Seas Dubbel Cannon IPA from Baltimore and Port City Optima Wit from Alexandria, Va. 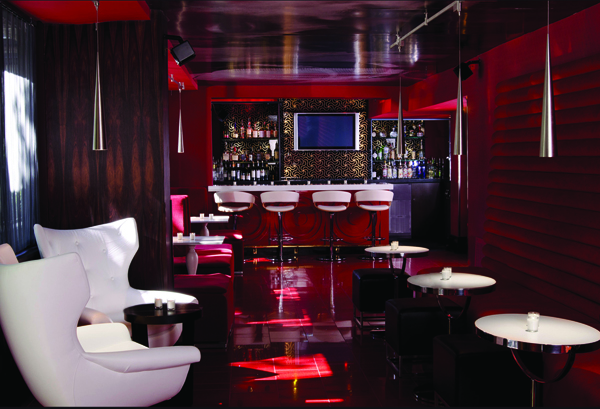 Bar Rouge is also one the first in Washington to offer Wines on Tap – a rather new trend gaining momentum with wineries and restaurants alike. It allows wine to be transferred directly from vineyard to keg, not only decreasing the carbon footprint but also guaranteeing optimum freshness with each pour. Bar Rouge features Silver Tap Wine selections, including a chardonnay, an organic sauvignon blanc and a zinfandel.

Wisner augments the wine list with a batch of the handcrafted cocktails that gained him a loyal following when he was bar supervisor at Poste. Most of the specialty cocktails feature a wine base and make use of fresh ingredients harvested from the organic rooftop herb garden Wisner maintains at the hotel. Signature cocktails include the Sakerinha, made with sake, sugar, pineapple and basil; the San Juan Sizzle, with rum, Domaine de Canton, Cockburn Ruby Port and soda; and the Taurus 38 Special, made with Novo Fogo Silver organic cachaça, lemon juice, prosecco, and blueberry and sage syrup. Don’t forget the Who You Calling Margarita, made of tequila infused with fresh herbs from the roof top garden. Bar Rouge is also capitalizing on the trend in batch cocktails and punches by featuring a Rouge Punch, with new recipe offerings each week. Cocktails are priced at $7 to $11. 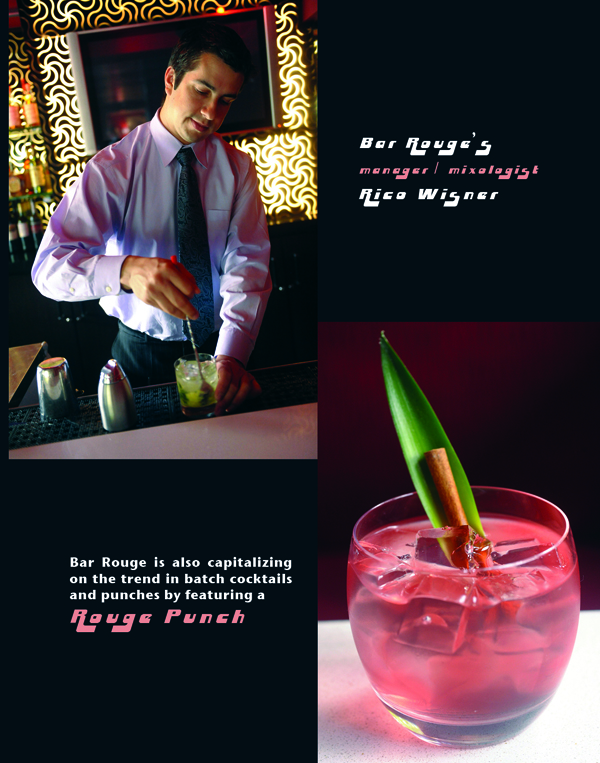 To develop the menu at Bar Rouge, Kimpton brought in Executive Chef Thomas Dunklin of B&O American Brasserie in Baltimore – named Maryland’s Best New Restaurant by the Restaurant Association of Maryland. The bar menu features a large selection of shareable American small plates and ideas for pairings with a glass of wine or a cocktail.

Some of the favorite small plates include Lamb Meatballs in a Roasted Red Pepper Puree with Sweet Peas and Feta, Bacon Wrapped Oysters with Sweet Pickle Aioli, and the Spring Asparagus Salad. Entrees include Slow Cooked Pork Ribs with a Pineapple Glaze and Spicy Cabbage Slaw and Seared Rockfish served over a Polenta Cake with Chard and Citrus Butter. Small plates and snacks range from $4 to $12; entrée-sized portions range from $12 to $20.

Guests can enjoy good food and drink within the renovated sleek setting of Bar Rouge. The new design, led by Andrea Dawson Sheehan of Dawson Design Associates and just barely a year old, maintains the bar’s signature bold red color scheme and intimate vibe. In a playful nod to the 12 Venus statues that line the bar’s exterior, an original mural runs the length of the ceiling featuring a contemporary black and white, digitally-enhanced painting of Venus frolicking with the gods.

The lounge is open for dinner daily from 5:00 p.m. to 10:30 p.m., and from 5:00 p.m. to close for drinks. Whatever time you decide to stop in, Bar Rouge is an exciting hotspot that makes for an entertaining evening or casual afternoon. 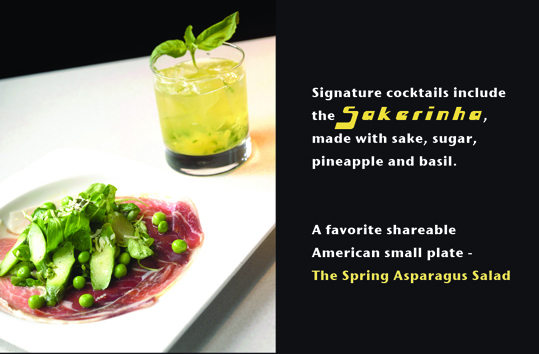