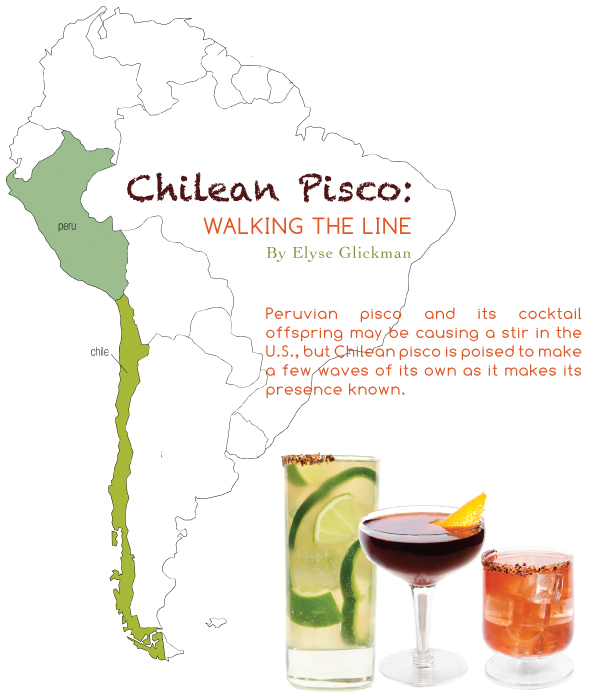 FROM LEFT TO RIGHT: Mapuche Mule, Bellavista Cocktail and a Mundo Loco.

Since the mid-19th century, the cultural “ownership” of pisco has been both a source of national pride and contention between Chileans and Peruvians. The spirit’s success in the 21st century is now adding some fuel and curiosity to the debate. In 2010, U.S. pisco sales from both Peru and Chile skyrocketed by 101 percent, which according to the Comisión Nacional del Pisco of Peru, makes it the fastest growing spirit in the U.S.

While Chileans don’t dispute the Peruvian discourse on pisco’s origins (dating back to the 1500s, when the Spanish first brought the grapes used for pisco into the viceroyalty of Peru, a territory which extends into present-day Chile), they cite statistics supporting the argument that Chilean distillers make and sell far more of the spirit on a global level.

While the controversy is helping boost pisco’s international profile, Chilean pisco distillers are using the opportunity to take measures to explain to beverage buyers and the public what makes Chilean pisco “real pisco”… and really Chilean.

“Pisco from Chile must rest for at least 60 days after distillation,” says Star Chef inductee Jason Littrell, a mixologist at New York City’s Dram Bar known for his innovative pisco-based cocktails. “Some producers choose to extend this period and let it rest in inactive wood for more than 2-3 years before bottling. Others use French or American oak to age the pisco and impart a caramel color and flavors like vanilla and spice to the spirit. However, what’s most important is that Chile also has a Denominación de Origen (DO) who mandates that in order for a spirit to be called Chilean pisco, it can only be produced in Atacama or Coquimbo.”

According to the organization PiscoChile.com, Chilean pisco is growing in leaps and bounds, even though forms of it have been floating around the U.S. since the 1850s. Capel and Alto del Carmen brands have been widely available across the U.S. for years, while Kappa (a Grand Marnier venture) broke into the market on the West Coast and is slated for a New York launch this summer. However, during the course of 2012 many more brands, from budget to artisanal, will be making their debut to the delight of home mixologists, cocktail lounge devotees and beverage pros alike.

“Capel is an incredible spirit and very affordable at $19,” notes Jason Littrell. “While it is great in Pisco Sours, it is also a good choice for punches and batched cocktails. People who like stronger flavors will like Alto del Carmen ($25), aged for six months in old American oak barrels. It’s actually a great one to sip or to add a bit more depth to any pisco cocktail.”

Mixologists on both the North and South American continents, meanwhile, are bringing added allure to pisco and the classic sour through recipes that factor in a variety of fruits and spices, some indigenous to Chile. In addition to Littrell’s efforts, noted mixology author David Wondrich has done his bit, collaborating with the newly-launched organization Pisco Chile (http://www.piscochile.com) to create a portfolio of pisco cocktails. Claudia Olmedo, one of Chile’s top mixologists and sommeliers, collaborated on a book about Chilean pisco detailing the history, tradition and brands produced.

In “sour” situations, where the basic ingredients are involved, the resulting cocktail will bear the stamp of whomever is making it — from the specific Chilean pisco being used, to the proportions of other ingredients. This is the case for the airline LAN Chile’s former executive chef Maria Eugenia Terragno Merino, who offers a sublimely simple variation at her in-home restaurant in posh Barrio Las Condes that accents but does not overpower her made-to-order multi-course meals.

When it comes to reinventing the modern sour, it is fascinating to observe and taste just how far mixologists from Santiago to Southern Patagonia are willing to go, whether the recipe is enlivened with familiar fruits like strawberries or grapefruits, or more exotic ingredients such as indigenous berries; for example, maqui, murta and calafate.

Outdoor sports and adventure are the main draws of Tierra Patagonia, a newly-opened resort at the edge of the Torres del Paine National Park in southern Patagonia. However, manager Chris Purcell notes that their bar and food programs help round out their guests’ experience as well as enhance their efforts to make the emerging “luxury eco-tourism” category their own.

“One of the great pleasures of travel is trying new things, and mixology that incorporates things uniquely Chilean is essential,” Purcell says. “While we offer our version of the classic sour, we have developed another with the calafate berry. We also just added our new ‘Lago Grey’ cocktail, inspired by that natural attribute of the park, and plan to create more cocktails that invoke some of the park’s most spectacular geological formations.”

While calafate, maqui and murta are not widely available in U.S. produce markets, ambitious mixologists may want to consider keeping preserves of these berries on the bar, especially if it is their intention to take their guests beyond the common pisco sour. They can be found at online shops like New York City’s Puro Chile (http://www.puro-gourmet.com).

“Pisco from Chile is incredibly versatile, as the wide range of styles and flavor profiles allow it to be substituted for virtually anything,” concludes Littrell. “It can be clear and fairly neutral, possess floral notes, have citrus flavors or resemble darker spirits with vanilla, spice, caramel and noble fruit flavors. The rise in popularity can also be attributed to the increase in travel to South America and the many travel stories written about Chile, where pisco sours are hugely popular. One can also say it is the result of the collaborative effort of these producers to push the exportation of their spirit and invest in creating awareness of the product and the ways in which it can be enjoyed.”