In 1982, the Jackson family founded Kendall-Jackson Wine Estates – one of the most successful independent wineries in the world – with a passionate belief in three time-honored principles: the importance of family, the molding of character through hard work and the creation of high-quality wines through long-term stewardship of the land. From that legacy came Jackson Family Wines, a winery holding company that includes Kendall-Jackson and some 30 critically-acclaimed wineries across the globe.

JFW remains a family-owned and family-run business, a distinction that is rapidly becoming a rarity in the wine industry. Being family-owned was paramount to founder and industry pioneer Jess Jackson, who believed it gave the family the ability to take risks with long-term benefits, such as growing grapes in difficult mountain and hillside vineyards, where the challenging terrain results in more intense flavors. Jess was a leader in the sustainable farming movement, which the Jacksons describe as a “generational approach,” the goal being to preserve the land so it remains healthy and productive for future generations.

Jess passed away in April 2011, but his family continues to integrate his core values across the company through sustainable grape-growing, inspired winemaking and a commitment to the communities where they do business. 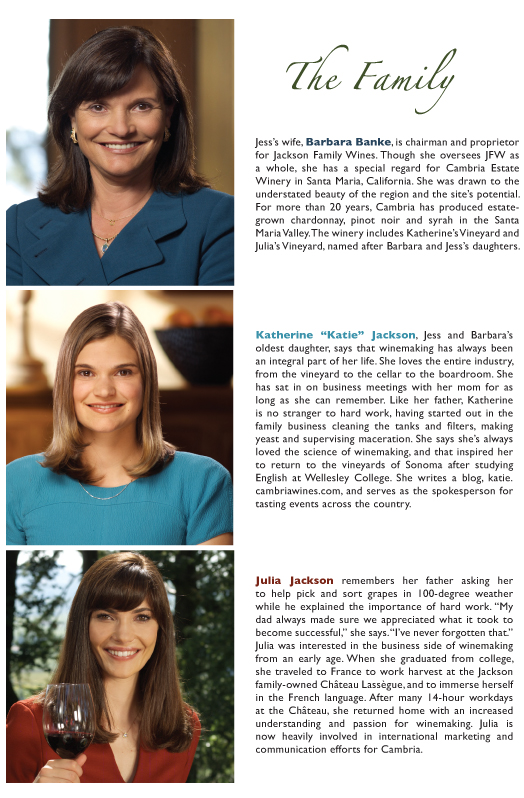 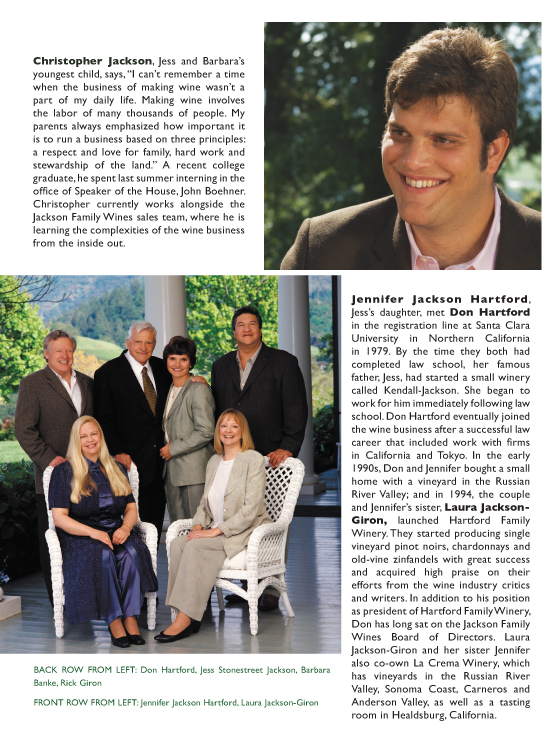 Rick Tigner is the Undercover Boss 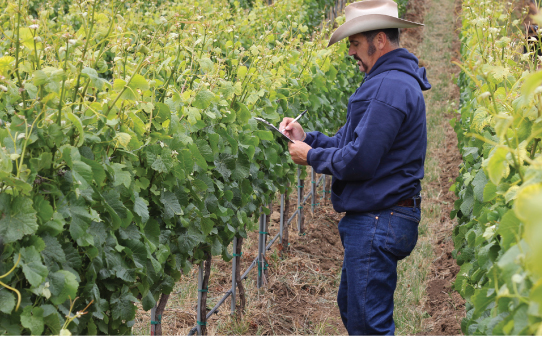 This past January, Kendall-Jackson was the first winery ever featured on the popular CBS show, “Undercover Boss.” CBS’s two-time Emmy®-nominated show has millions of fans across the country and was a perfect venue to showcase Kendall-Jackson’s family ownership, commitment to quality, sustainable farming, and all the hard work that goes into making great wine. With this in mind, company president and 20-year industry veteran, Rick Tigner, stepped out of his office and into the vineyard incognito, to look, listen and learn.

Rick explored all aspects of handcrafted winemaking, from vineyard to bottle and everything in between, including the vineyards, the bottling line, as a grocery store salesman and in the tasting room. After all the physically tough vineyard work, he described the tasting room as very hard work and he had to learn to multi-task and treat people with a concierge level of service. Out of that great hands-on experience, he claimed he was going to have his top 50 managers experience the tasting room job for one or two days this year “to get to know the story of the brand, and also to get to know the people.”

“I knew it would be an educational opportunity where I could look, listen and learn, but I didn’t know it would be an emotional one as well. Every day was an exciting and new experience — I loved being able to see our business from such a rare perspective,” said Tigner, who was promoted to president in May 2010. “I had an opportunity to see the passion and commitment our employees have for their jobs and this company. A lot of work and talent goes into making a bottle of Kendall-Jackson wine, and I was honored to witness that firsthand.”

His comments on the family were: “The next generation of Jacksons is actually very young. They’re all in their 20s. They’re part of social media, they blog for the company, they’re involved in our web design and the internet part of our business. They help with our outreach to Millennial consumers, and I’m very excited about what they bring to the table.” 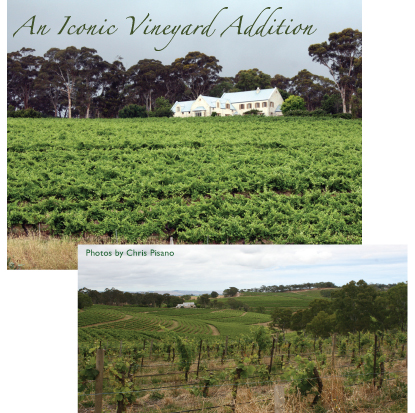 This past February, JFW purchased the famous Hickinbotham Vineyard at Clarendon in South Australia’s McLaren Vale wine region. “There are few properties in the world like that of the legendary Hickinbotham Vineyard at Clarendon,” said Barbara Banke. The estate, which began in 1858, has grown grapes for legendary wines including Penfolds Grange and Hardys Eileen Hardy. The 455-acre estate comes with a chateau-style main house built by the Hickinbotham family and the distinctive Earth Shelter House, designed and built by German architect Gerhard Schurer in 1981.

Barbara and daughter Katie Jackson will be responsible for the Clarendon property. “We see more interest in Australia wines, especially at the high-quality end,” Katie told the Wine Spectator. “My father always taught me that it’s all about the vineyard, and this was a great opportunity to add a special one.”

Jackson Family Wines and its Kendall-Jackson winery, one of America’s most beloved family-owned winemakers, have received a 2011 Green Power Leadership Award from the U.S. Environmental Protection Agency (EPA) for proactive, voluntary efforts to address climate change through renewable energy purchases, leadership, overall strategy, and having a measurable impact on the green power market. During 2011, Kendall-Jackson purchased 30 million kilowatt hours (kWh) of renewable energy certificates (RECs), equal to 130% of the company’s annual electricity usage for all its operations including vineyards, wineries, offices and warehouses. As part of the purchases, Kendall-Jackson purchased RECs on behalf of all its 1,000+ employees’ annual home power usage, a first for any major organization, to encourage awareness of renewable energy’s importance and the impact of the company and its community. This year’s purchase placed Kendall-Jackson 32nd on the EPA list of 100% purchasers.

“My family and I are so pleased to have Jackson Family Wines receive this recognition from the EPA, and honored to be in such great company with the other Green Power Partners announced today,” said Barbara. “Awards like these only underscore our strong commitment to sustainable practices and running our wine operations in a way that aligns business success with doing the right thing for the community and the environment.”

“Renewable energy is an important component of the sustainability efforts of Kendall- Jackson, and all of the wineries owned by the Jackson family,” said Robert Boller, vice president of sustainability. “Through our sustainability efforts across the company we strive to create shared environmental, social and economic value. During the first two years of our centralized program, our investments in energy conservation have resulted in annual savings of almost 9.3 million kWh, through equipment upgrades and process changes. We’ve also reduced water use by over four million gallons per year.”

The combined energy conservation and REC purchases by Jackson Family Wines are equivalent to more than 6,200 homes’ annual power consumption in Northern California, or emissions from burning the equivalent of more than three million gallons of gasoline. 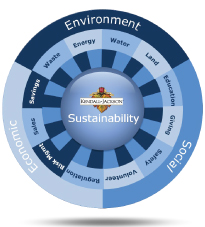 Jackson Family Wines takes a generational approach to farming the land and maintaining the environment. The goal is to ensure that the land remains healthy and productive for the following generations to farm. Surely, the term “generational approach” may sound like a marketing slogan to some people, but the opposite is true.

Over the past 30 years, founder Jess Jackson and his family acquired some of the most desirable and dramatic vineyard land in California. His passion for the land was always clear and few things quenched his thirst like spending time in nature with his family.

Although Jess passed away in April 2011, his family continues to see his dreams come true. His dream of maintaining the vitality of the land and their business for the next generation is a reality. His children are stepping to the forefront to help direct the company’s future with their mother, Barbara, in charge. It’s also very clear that Katie, Julia and Christopher are just as committed to being socially and environmentally responsible as their parents.

We look forward to following this iconic wine family into the future! 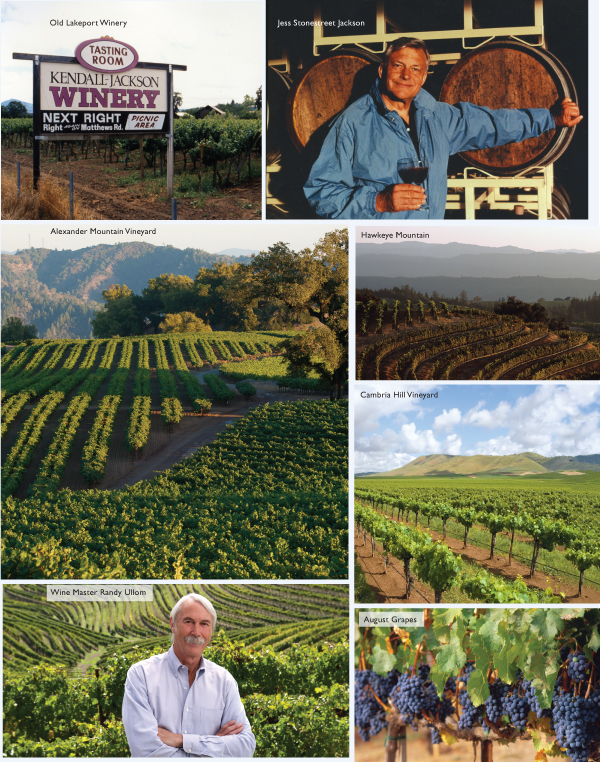