By: Larry Olmsted from his column, The Great Life, at Forbes.com 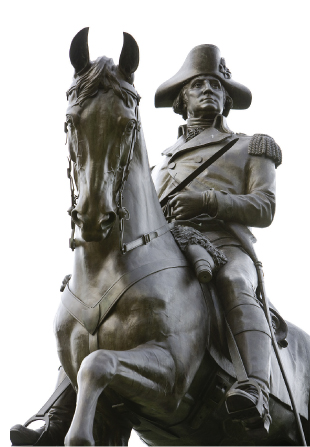 I just tasted the most unusual whiskey made in this country – George Washington’s personal recipe, made in his distillery – and you can too, (learn how later in the article).

When it comes to the near mythical “Father of Our Country,” fact and fiction are often blurred. It is almost certain that George Washington never cut down the legendary cherry tree. He probably did pioneer espionage as an important part of military strategy. But one thing we know for sure is that he liked his booze, he liked making money, and in selling more than 10,000 gallons of rye whiskey annually, Washington was a savvy entrepreneur who owned one of the largest distilleries in 18th century America. 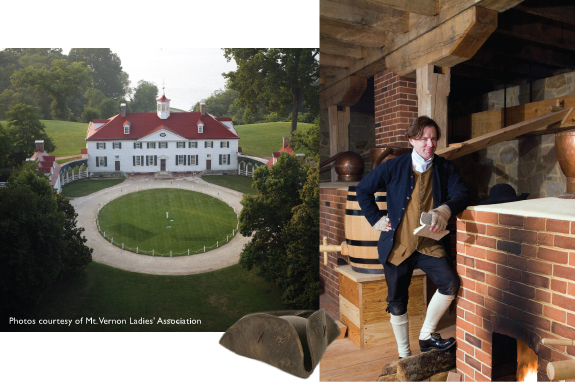 Mansion and re-enactor in the still at Mt. Vernon

It’s a side of Washington few people know about, and much to my surprise, the folks bent on spreading the word are none other than the administrators of George Washington’s Mount Vernon, his longtime Virginia estate and now a non-profit living museum and historical landmark. Archaeologist Dennis Pogue, VP of Preservation at Mt. Vernon, is the author of Founding Spirits, a book about the first President’s love affair with strong drink and his role in launching the American whiskey industry.

But Pogue did not stop at this academic exercise. Instead, he excavated Washington’s once prolific distillery and oversaw an elaborate effort to rebuild it as it was. Just outside the nation’s capital but far from the eye of the mainstream media, the folks at Mount Vernon, still dressed in period garb, have been quietly churning out Washington’s signature rye whiskey since 2006 – and it is one of the most coveted bottles on earth.

The distillery was rebuilt on its original footprint from old records and the work was done using 18th century tools, materials and construction.

First, a little history. When Pogue and his compatriots decided to re-launch whiskey production at Mount Vernon, they found a strong ally in DISCUS, the Distilled Spirits Council of the United States, the national trade association representing more than 70% of all spirits sold in this country. DISCUS had little trouble convincing its biggest members, global giants like Diageo, Brown Forman, Beam Global Wines & Spirits, Pernod Ricard, Moet Hennessy, and others to donate enough to rebuild and reactivate Washington’s distillery. After all, this was an immense PR opportunity for the spirits industry, a chance to set the historical record straight about the father of our country and his love affair with making and drinking booze. Or as Pogue points out – and as a historian is deeply offended by – “the temperance movement hijacked his persona, in a flagrant attempt to rewrite history, by portraying him as a non-drinker.” 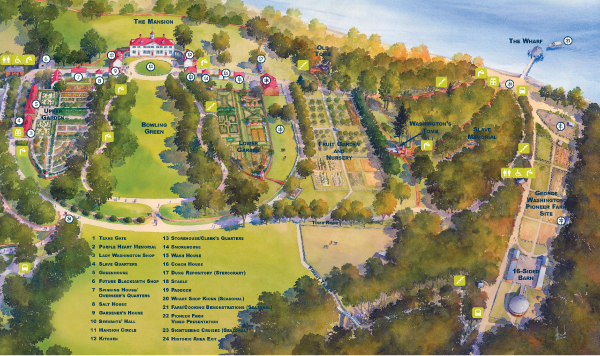 The truth is quite the opposite, at least according to signage at a Mount Vernon museum. “George Washington seems to have held an enlightened, modern attitude toward the consumption of alcohol. He himself imbibed a variety of alcoholic beverages: .Port and Madeira and rum made into punch, along with beer and whiskey.” According to the woman who gave me a culinary tour of the estate, Washington often enjoyed all of these drinks in the same evening session.

Washington’s distillery opened in 1797 and produced as many as 11,000 gallons of rye in a single year.

The distillery project began about 13 years ago, and Mount Vernon hired former Maker’s Mark head distiller Dave Pickerell, now the leading consultant in the American whiskey industry, to spearhead the effort (coincidentally, I recently wrote about Pickerell’s involvement with Whistling Pig, the highest rated Rye whiskey ever produced). It took a few years for the distillery to be planned and built, especially since it was done entirely in period fashion, using authentic tools, materials and construction techniques of the late 18th century – there’s not a screw or piece of sheetrock to be found (with the exception of mandated fire alarms and lighting). As result, the distillery is wonderfully primitive, and lacks even running water. For every batch, the stills are filled (and emptied) bucket by bucket, everything is done by hand, and the stills themselves (there are five) are all basically brick fire chambers with copper vessels on top. Even the wood burnt in for distillation is chopped by hand with an ax. That’s it, not a single gauge, dial, valve or even copper coil in the entire place. It is distilling at its most basic, and more importantly, it is the way Washington, with instructions from his ex-pat Scottish partner James Anderson, made his whiskey, in the very same spot. The Scottish connection is so strong that when the distillery reopened in 2006, it was dedicated by Prince Andrew.

Today, the distillery, a small museum devoted to it, and grist mill next door, where a water-powered wheel ground the rye for the operation, are open to the public, like the rest of Mt. Vernon. Because of both temperature concerns (too hot in summer, too cold in winter) and safety, given the open fires and cramp space, the distillery is open but not operated during peak tourist season, April-October. Pickerell comes twice each year and produces two whiskey batches, in early spring and late fall. In normal years, this is the sole commercial production of what is labeled “George Washington Whiskey,” and made in two styles. A “white whiskey,” the kind Washington typically sold, is a Rye (law requires at least 51% rye grain to be labeled rye, but Washington’s recipe calls for a more generous 60%) bottled straight from the stills and un-aged. While clear whiskey looks unusual, almost all distilled spirits are clear when finished, it is the aging and storage in wood that gives them color. The remainder is aged in charred, new American oak barrels, as is typically the case for bourbon and other domestic whiskies, for two years. This is referred to as the aged version, and is more typically brown. For authenticity, the distillery uses local rye and other grains grown on a nearby Virginia farm and ground onsite, and all the proceeds go to Mount Vernon’s operational overhead.

Both whiskies are sold only through the Mount Vernon gift shops, and go on sale about a month or two after the production runs. When they do, fans and collectors line up outside starting at 6AM (or earlier) and the entire batch sells out immediately. Last time it took 3 hours, but that was exaggerated by a failure of the credit card reader – it should have sold faster. The stuff is not cheap: 375ml bottles, half the normal size, of the un-aged fetch $95 and the aged is $180. You can buy it no place else (except maybe on Craig’s List or at auction) and only in person, twice a year. 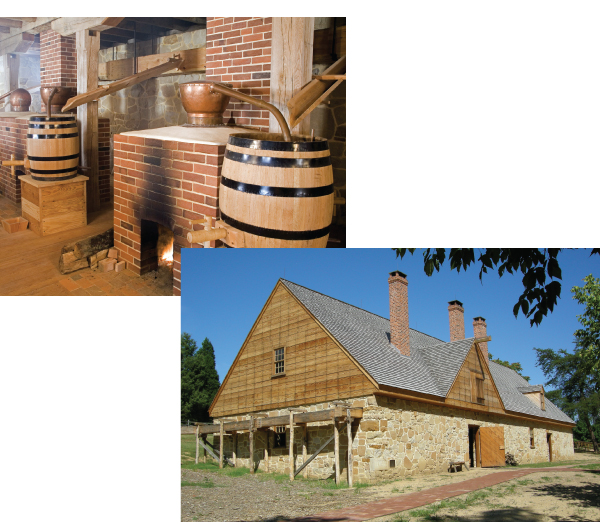 I say the distillery runs only twice in a “normal year” because this is not a normal year. When I visited Mount Vernon last week, I had the rare pleasure of being part of history. Since Washington’s start as a distiller was directly the result of Scottish influence, and this is the 100th birthday of the Scotch Whisky Association, DISCUS planned a joint international effort of brotherhood. The head distillers of three renowned Scottish distilleries, Glenmorangie, Laphroaig, and Cardhu (most of the single malt that goes into Johnnie Walker blended Scotch) visited and brought with them pure Scottish peated malt, the only grain allowed to be used under Scottish law. Together with Pickerell, they created the first ever single malt whiskey at George Washington’s distillery, done in the traditional legal manner of Scotland. Because the distillery is not in Scotland, it can’t be called Scotch, but it is a Scotch-style single malt and a unique one-time effort. The visiting distillers were both mystified by and impressed with the facility, unlike any that remains in existence on the other side of the pond. They even brought barrels with them, since unlike bourbon, Scotch is aged in repurposed barrels form other wines or spirits. The entire results of the several day distillation run, about 100 bottles worth, was put into barrels to age for the Scottish legal minimum of three years – I helped fill one. In 2015, the bottles will be distributed to 100 charities around the globe and each will be auctioned for fundraising.

I tasted the new malt spirit straight from the still at about 165 proof, and despite being much stronger than anything you would ever normally drink – or be able to buy – and having no age or wood, the underlying Scotch-like flavor came through clearly, and the distillers themselves were surprised how well it came out. With about as small a production run as any whiskey will ever see, in three years these 100 bottles are sure to become instant and coveted collectibles. Until then, you can line up to buy Washington’s whiskey in Virginia, or simply visit the distillery to see what it is all about, while drinking more Scotch, Rye or Bourbon at home, any of which would make old George proud.

Or you could travel the American Whiskey Trail, which includes the Mount Vernon facility and a mix of cultural and historic sites associated with whiskies as well as working distilleries, from New York City to the Caribbean.

As I have mentioned in recent stories, spirits are all the rage in the US right now. Maybe it’s a “Mad Men effect,” but spirit consumption in this nation is approaching its peak in the 1960s for the first time in half a century (mainly at the expense of beer). There is a craft distilling revolution afoot, and it was not that long ago when the high-end bourbons we now take for granted like Knob Creek and Woodford Reserve did not exist. I remember when Jack Daniels made just two labels, before the relatively recent introduction of JD Single Barrel and Gentleman Jack. I have visited distilleries in Breckenridge, Colorado and Park City, Utah of all places, and recently sampled exceptional new Ryes, a red hot category, bottled in Kentucky and Vermont. George Washington’s tiny distillery fits this theme perfectly and should, since he started the whole thing.

Plus, there was that whole thing about him winning the Revolutionary War. So cheers to our First President.