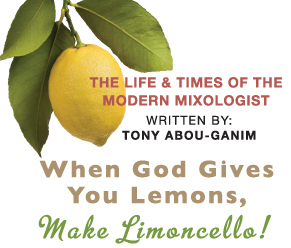 Sitting at the bar at Due Forni, a wonderful little pizzeria in the Summerlin hamlet of Las Vegas, George was enjoying his first Negroni of the evening alongside a plate of Polipo, braised Mediterranean octopus with arugula. With his Branzino entrée, Billy the barman recommended a glass of Banfi Gavi, which paired beautifully.

After dinner while George was savoring an espresso, Alex Taylor, one of the restaurant partners, approached with two small glasses of cloudy, yellow liquid. “House-made limoncello with our complements!” he said, offering George a glass. Taking the first sip of the chilled liqueur, George found it beautifully sweet with a tart, crisp flavor of fresh lemon.

“Delicious! Thank you!” George said. “I have never tried this before.” Alex explained that they make their own at the restaurant but that limoncello’s origins are rooted in the Amalfi Coast region of Italy in the beautiful city of Sorrento. Being the bon vivant and world traveler that he is, George did not need to be told twice.

Thinking that the best way to explore this part of Italy would be by ship, he immediately checked in with his favorite cruise line, Crystal. George booked a trip for the next day on the Serenity, sailing out of Venice with an overnight stop in Sorrento. Arriving in Venice early, he knew he wanted to visit Harry’s Bar for a couple of Bellinis and their signature Croque Monsieur sandwich before boarding the ship.

When the ship docked in Sorrento, George was anxious to explore the coveted capital of limoncello, and he did not have to wander far. The port offered many cafes and restaurants in which to eat and sample the local flavor. He also discovered numerous open-air fruit stands and was amazed by the size of the luscious lemons, clearly the secret to the region’s amazing liqueur.

Finding his way up several winding streets, he arrived in the heart of the city to discover a lot of shops that were making and selling limoncello. Since the liqueur is made by the maceration of the local lemon peels in high-proof neutral alcohol, no distillation is required. It seemed like everywhere he turned he was offered a sample of the local’s limoncello, all of which he graciously accepted and found to be wonderful.

Sitting in a café after all of this tasting, George realized he was desperately in need of a meal. He asked the waiter to recommend somewhere one might go for lunch. “Take the ferry to Capri,” the waiter said. “Find a little trattoria called Buca del Bacco on Via Longano, and have the pizza.”

George bought a ticket and boarded the ferry for the quick trip to Capri, with great expectations of a wonderful lunch. Once in Capri and after several stops for directions, he found Buca del Bacco tucked away at the end of Via Longano. Upon entering, he was greeted by the smell of their wood-burning oven and the wonderful Neapolitan pizza the region is famous for. Seated at a small table near a large open window overlooking the beautiful coastline, George could not help but understand the romance of Capri and how wonderful it would be to fall in love in this magical place.

Just then the waiter broke this spell and brought him a beautiful insalata caprese, the salad inspired by Capri made of local tomatoes and house-made mozzarella, served with a carafe of the region’s white wine. The secondo consisted of a small serving of homemade fettuccini in a lemon sauce with another wine pairing. Finally it was time for the Neapolitan pizza, topped with fresh tomatoes, mozzarella, basil and sausage. After George finished his last bite, the waiter approached with a bottle of the telltale yellow liqueur and a frozen glass, and set them on the table for him to help himself. What an amazing meal and amazing hospitality!

BELOW: The Crystal Serenity sailing into Venice Italy. crystalcruises.com

The Tony Abou-Ganim Southwest Spirit Summit is planned to be a three-day celebration of spirits that will bring together leading talents, brand representatives and well-known chefs for an exciting adventure in mixology, cuisine and fun. Members of the food and beverage trade and the public are invited to attend the weekend, which will include seminars, action-packed competitions, tasting rooms, spirited dinners and more. Beneficiaries are The Helen David Memorial Fund for Breast Cancer, which provides support for families of bartenders whose relatives have been affected by the disease; the Museum of the American Cocktail in New York City; and Speed Rack, the exciting national women’s bartending challenge that raises funds to benefit breast cancer research.