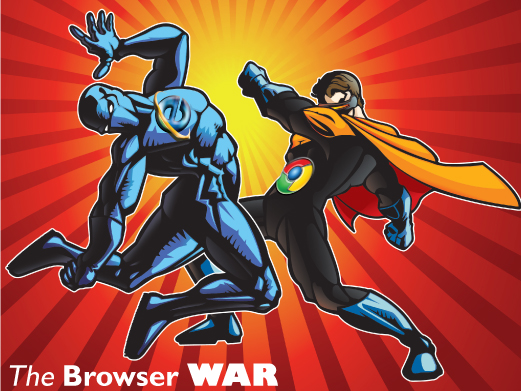 If you haven’t picked a side, you should consider your options.

There are really only three browsers that share the majority of the World Wide Web: Microsoft Internet Explorer (IE), Google Chrome and Firefox. The next closest rivals are Safari and Opera, which when combined only represent 8 percent of the market share.

We are at an interesting crossroads in the browser world. Not since 1995 have we seen such fierce competition. In May 2012, Google Chrome took over as the leading browser of the world, which was previously held by IE (according to StatCounter, the premiere Web analytics company). If you haven’t heard about Chrome, it’s probably because it’s relatively young (founded in 2008) and most of its success has been overseas. If you’re not a tech geek like me, you probably haven’t thought twice about which browser is best for you.

For most people, the search engine is far more important than the browser. Whether you are a fan of YAHOO!, Google, Bing, Ask or the old-school AOL, the browser you choose makes for an equally important decision. Thank goodness there is more to life [big yawn] than Internet Explorer. Choosing the right browser is more important than you think. It is used every time you search the Web on your computer, tablet or smart phone. Each has its own positives and negatives like all great competitors, but understanding the differences will help you make the right decision.

Since everyone has an opinion, here is mine:

Microsoft IE has been the true workhorse for at least the past decade. It is highly compatible with most Web sites and easy to use, but what it gains in usability, it lacks in speed. IE is by far the slowest of the three browsers. If you prefer to saunter through rather than surf the net, then this tried-and-true option will certainly suffice.

Firefox was the dark horse when it emerged in late 2004. With a fiery fox adorning the logo, it was quickly adopted by the anti-Microsoft geeks. Today it still represents the alternative to large Internet conglomerates. But more importantly, it’s fast when the browsing gets heavy. Firefox provides the most tools for developers, so it’s no secret that they prefer the fox.

Google Chrome is the shiny new toy we all want to play with. It’s fast out of the gate, secure and plays well with all of Google’s must-have tools. Nowadays, there’s not much that Google doesn’t do well and this is no exception. Because Chrome is the youngest of the three browsers, it lacks some fine-tuning compared to its competition. What Chrome seems to handle exceptionally well is HTML5, the latest and greatest programming language that is used by the best new Web sites.

One thing’s for sure: If you publish content for the Web, you should make sure it functions properly across all three browsers.