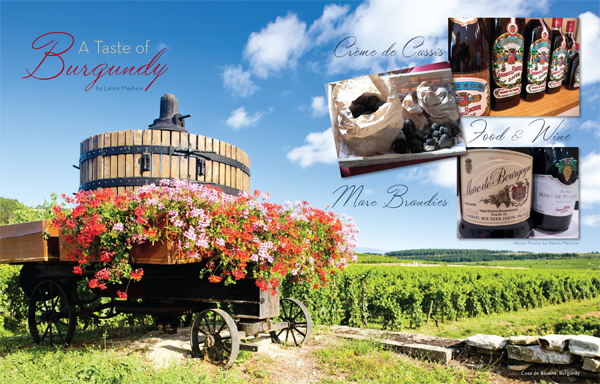 My exposure to crème de cassis first came as a young bartender in Sacramento, California. I had an older regular customer, a woman, who would come in and drink Kir cocktails. At the time, I was mixing a sticky sweet, artificially-colored substance into whatever cheap white wine the house happened to be pouring. Curiosity got the better of me one day and I tasted her drink; for the next twenty years, I had no interest in crème de cassis.

Crème de cassis has an interesting story in French history. In its earliest usage, a half-liter bottle would be placed on tables in bars and cafes. Patrons would come in and order their choice of wine, and if the wine wasn’t to their taste, or if they preferred it sweeter, they would doctor the wine with a splash of cassis to make it more palatable. From doctoring wine, ratafia was born. Ratafia de Cassis was a cordial based on wine, crème de cassis de Dijon, sugar and fruits, which was placed in the sun to help marry the flavors. Ratafia was used to toast successful business deals in Burgundian attorneys’ offices and it became a part of the local culture. It wasn’t until after World War II, though, that crème de cassis de Dijon gained an international reputation.

The mayor of Dijon at the end of the war was a priest named Felix Kir. After the Nazis had looted stocks of Burgundian wines, Kir hit upon the idea of serving visiting dignitaries what was then known locally as “blanc cassis,” which was crème de cassis mixed with a local white wine, Aligote. This drink caught on and demand for cassis spread with what later was renamed the Kir cocktail. Now, cassis is France’s number two aperitif, behind only pastis, and the Kir cocktail and its cousin the Kir Royale have helped spread crème de cassis all over the world.

While crème de cassis can be produced anywhere in the world, the best crème de cassis hails from France. Crème de cassis de Dijon indicates that the producer is in or around the original home to cassis, Dijon. Gabriel Boudier and Briottet are some of the best Dijon cassis brands. If the cassis is made in Burgundy, but not Dijon proper, crème de cassis de Bourgogne will be on the label instead. Look for offerings from Cartron or Joannet. 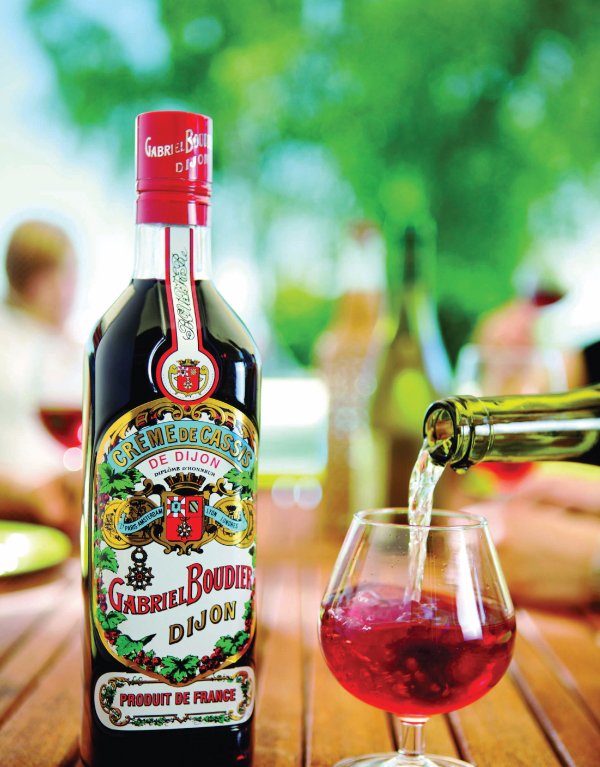 Good crème de cassis should have few ingredients. The best have just currants, sugar, alcohol and water. The flavor should be intense and complex, with dark berry notes, a hint of florality and good acidity to balance the sugar levels. Poor quality crème de cassis can be easily spotted by a heavy emphasis on sugar and sometimes artificial flavors with a cloying sweetness. 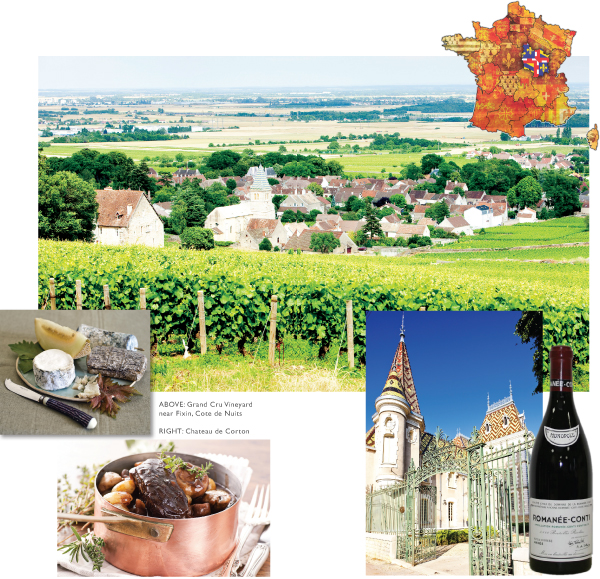 Burgundy is the center of France, both literally and figuratively. Known for world-class wines and food, Burgundy has been one of the most powerful areas of France since the days of Charlemagne. By the time the Romans conquered Gaul in 51 A.D., vineyards were probably already in existence in Burgundy, and by 1098 the Cistercians, a group of Roman Catholic monks, had built an abbey and created the first walled vineyard, called a “clos.” Furthermore, Burgundy’s strategic location, between northern and southern Europe, made it a center for trade as well as an influential political center with many monasteries and churches. All of these factored into creating what is one of the most interesting and exciting destinations in France today.

Burgundian contributions to French cuisine are numerous. From the eponymous boeuf bourguignon, a slow-cooked beef stew, to the gougères, the original cheese puff, to escargot, the garlicky snails cooked in butter, to pan-fried frog legs, Burgundy has made its mark on French cuisine. Stroll into a local bistro in Dijon or Beaune and you will likely be offered jambon persillé, ham chunks with parsley in aspic. Burgundian black truffles, while not as well known as those from Perigord, are also highly prized and come with a much more affordable price tag. Truffled saucisson is not unusual to find as part of a midday snack with a local cheese and a glass of wine.

Cheese is another specialty of Burgundy. With the largest herds of goats in France, excellent chèvre is found everywhere. Citeaux, a mild washed-rind cheese made by monks, is an approachable, soft cow’s milk cheese made from raw milk and aged for three weeks. Epoisses, perhaps the most aromatic cheese in all of France, is a pungent, raw milk cow’s cheese favored by Napoleon and referred to by Brillat-Savarin as the “King of All Cheeses.” Washed with local marc de bourgogne, epoisses develops an orange-red rind and an ivory runny interior that pairs well with dessert wines.

Wine is certainly important to Burgundy and the world’s most expensive wine, Domaine La Romanee-Conti hails from the Cotes d’Or. Essentially, there are five wine districts in Burgundy (also known as “vignobles”) and two primary grapes, Pinot Noir and Chardonnay (some smaller varietals do exist, including Gamay and Aligote). About 60 percent of the wine produced in Burgundy is white wine, with 30 percent devoted to red wine and 10 percent to sparkling wines known as Crémant de Bourgogne.

The most northerly region, Chablis, is famous for its Chardonnay-based white wines. Next comes the Cote d’Or, which is actually divided into two districts, the Cotes de Nuits and the Cote de Beaune, which are the heart of Burgundian excellence. The Cotes de Nuits contains 24 of the 25 Grand Cru designated red wines in Burgundy, while the Cote de Beaune is home to every Grand Cru white wine in Burgundy. Farther south, the Cote Challonaise produces a mix of red and white wines, while the Maconnais produces a large volume of white table wines. Beaujolais, officially part of Burgundy, is even farther south and produces Gamay-based wines under different rules and classifications.

Burgundy wines are classified by Cru rankings. Grand Cru is the highest rating, and there are only 32 Grand Cru sites in all of Burgundy. Premier Cru wines are the next highest quality, while the village or communal appellation will just state the name of the town that the wine is from. Furthest down the list are regional appellations like Bourgogne, or sub-regional appellations like Bourgogne Hauts-Cotes des Nuits. While this can be confusing, the overall quality of Burgundian wines is quite good and even wines at the lower classifications can offer a good wine experience.

While the best way to experience Burgundy is to visit the region, walk among the vineyards and eat the local foods, many of the best food and wines of Burgundy are readily available in the United States. Use your own palate as a guide and discover the treasures of Burgundy’s great food and wine. 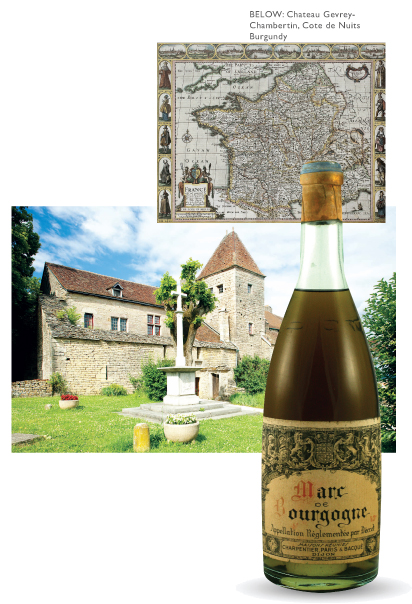 After finishing a meal in an Italian restaurant, I like to order grappa to accompany my dessert. Grappa, the Italian pomace brandy, has caught on in better restaurants and bars in the last decade. France has a similar pomace brandy, made from the leftovers of the winemaking process, but marc brandy has yet to gain the following of grappa. Instead, France’s last undiscovered brandy, marc, remains a mystery to most.

Cognac and armagnac are perhaps the greatest brandies in the world, so that may explain why marc brandies are overlooked. Distribution is also limited, with only a small number of marc brandies coming into the United States. Even in France, marc takes a backseat to cognac and armagnac, often being dismissed as an old man’s drink. Luckily, those who take the time to discover marc are in for a delicious surprise.

Marc brandies are distilled from grape pomace leftover from the winemaking process. In Burgundy, the best marc brandies are made from some of the top vineyards in the Cotes d’Or. Producer Didier Meuzard actually takes his still into the vineyards in places like Cotes de Nuits and Gevrey-Chambertin, where the pomace is distilled one time (as it is for armagnac) before being stored in oak barrels. His Vieux Marc de Bourgogne, an 18-year old marc brandy, offers an intriguing bouquet of freshly-roasted almonds, honeysuckle and oak, while offering dried plum and raisin notes on the palate.

While marc is made outside Burgundy, the best French marc comes from Burgundy alone. World-class Chardonnay grapes (and to a lesser extent, Pinot Noir) create this undiscovered treasure of France. Pair Marc de Bourgogne with crêpes suzette, a Tarte Tatin or any fruit-based dessert for a memorable pairing that is both French and still new to most Americans.