If I told you a story about a little boy who stole the hearts of an entire ship, passengers and crew alike, was recognized in faraway lands, was hailed as a “king” on a foreign island, and brought treasure beyond belief to his own family, you may not believe it. But it did happen. Using his most powerful tool – his beautiful smile – he did all this.

The little boy’s name is Arthur, and he is my son. Arthur was born with a virus that severely damaged his brain and left him totally dependent upon others for his care. That, however, has not stopped Arthur from making an impact on the people he meets every day. This is his story and his adventure. 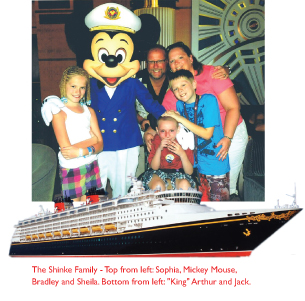 Arthur loves pirates and this adventure was given to him and his family by an organization called C.O.R.E. (Children of Restaurant Employees) and the Tavern League of Wisconsin. It was a seven-day Disney cruise in the western Caribbean that included my wife Sheila, son Jack, daughter Sophia, my mother Margo and me.

We set sail aboard the Disney Magic out of Port Canaveral in Florida, on Saturday, May 3, and it did not take long for us to realize that Arthur was considered a V.I.P. Immediately Arthur was being called by name by every employee we came in contact with. On a ship filled with nearly 2,000 passengers, how is this possible? As Arthur’s smile shined throughout the ship, the passengers aboard seemed to be drawn to him just as the staff was. It seemed that whenever we took a stroll, strangers would stop and introduce themselves to Arthur. Arthur quickly became a friend to everyone on the entire ship.

The Disney Magic surely lived up to its name. There was “magic” around every corner. Along with world-class food and entertainment, we received gifts beyond imagination. Limited edition art work, private tours of the ship, flowers, stuffed animals, a private meeting with Disney characters, and even a cheese platter addressed “To our friends from Wisconsin” were among some of the many wonderful things we received. We were always overwhelmed and sometimes even embarrassed by the attention given us. It was as if we were the stars of a play, with Arthur playing the lead, and the entire ship, cast and crew, were there to support us. 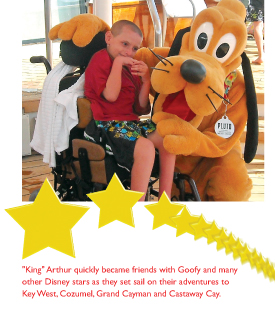 Our first port of call was Key West, Florida, and it was what I consider my favorite part of the cruise. I was very excited to visit the southernmost incorporated place in the contiguous United States, to see and feel the history of it all. My other family members, however, did not share the same joy. My daughter said it reminded her of an open air museum. Right up my alley!

After doing the usual touristy things, like the train ride through Old Towne, looking at old homes and even older trees, we did a little shopping. When we felt the kids were sufficiently bored, we decided to make our way back towards the ship by walking down historic Duval Street. As we walked along, the kids were excited about getting back to the ship. Then we heard someone yelling the name “Arthur.” At first I thought it was someone from the ship who had recognized him, but to our amazement, it was a lady from our hometown who recognized Arthur from his daycare.

We had never met her before but she told us that her son had gone to the same daycare as Arthur. She was visiting her parents and having lunch, when she looked up and realized the little boy in the wheelchair being pushed down Duval Street was Arthur. She said she could recognize his smile anywhere, even 1,700 miles away from home.

Our first stop outside the United States was the Mexican island of Cozumel. We were told by the travel agent that we may have a hard time getting proper transportation and care for Arthur outside the United States, but we were quickly and pleasantly surprised by the care and consideration given to him by everyone on the island. The people of Cozumel went out of their way, and every effort was taken to ensure that his comfort and needs were met. 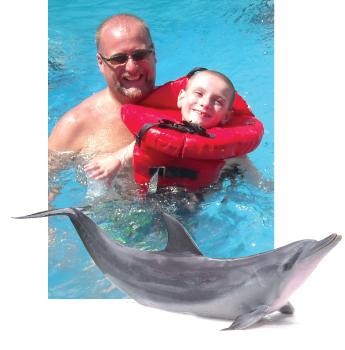 Our tour guide’s name was Diego. He took an immediate shine to Arthur, even declaring that Arthur should be called “King Arthur” by everyone else! He stated that, for today, “Cozumel will be called Arthur’s Island,” once again embarrassing our family with so much attention.

Although it was a cooler, mostly cloudy day on Cozumel, we were set to swim with the dolphins. Our older children, Jack, age 11, and Sophia, age 10, will tell you that this was the “best experience ever.” We did the “Push, Pull, and Swim” package. I would describe the feel of the dolphins as a warm and wet leather couch. The dolphins’ beauty, grace, and strength were beyond anything we ever expected – truly an awe-inspiring experience.

Grand Cayman was what I would call laid back. “No rush to get anywhere anytime soon” should be their motto. And as they say, “While in Rome, do as the Romans do.” So we enjoyed a day of forgetting our cares and worries as we relaxed on a seven-mile beach. As with Cozumel, the people on Grand Cayman went out of their way to ensure Arthur’s comfort. They even went so far as to carry him and his wheelchair nearly a quarter mile down the sandy beach to our own private spot. Again, the boy was living like a king. While at the beach, we stayed in the water for most of the day. We watched as ships came and went and witnessed huge storms far out at sea, but mostly just enjoyed each other’s company. 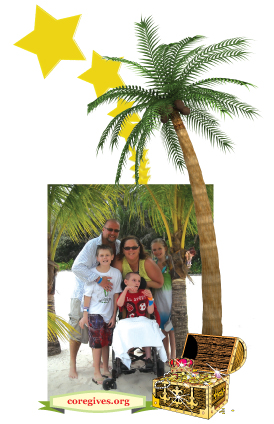 Castaway Cay (pronounced “key”) is Disney’s very own private island and was our last stop on our vacation. Once used as a stopover for drug runners, the island is now unmistakably Disney. With water bluer than anything I’ve ever seen and not a single thing out of place, it is what my wife described as “absolute paradise.” We enjoyed a day of fun activities and delicious food in a setting that could only be described as storybook. Pure Disney!

Later in the day my older son asked my wife to help build a sand castle. As they were building, she could not help but feel a touch of sadness. She wondered where the time went, not only on the trip, but the time in our lives as well. Could this be the last time her son would want his mom to help build a sand castle? What would happen to our family as our kids got older? As tears rolled down her cheeks, she looked out into the water and saw me with our daughter, and then looked up at Arthur, sleeping under a palm tree with his grandma. Then she realized that no matter where the time had gone or what may happen in the future, she had this moment, with her family, to enjoy and be thankful for, all because of a beautiful boy named Arthur.

Through time, people have sailed around the world searching for treasure. We have the great fortune of having our treasure with us all the time. His name is Arthur and at this moment, he just happens to be underneath a palm tree on a beautiful island. Who knew?