Islay, Scotland (March 7, 2013) – Bowmore®, the first Islay Single Malt whisky, introduces The Bowmore Water Program, a global whisky and water education program featuring hand-crafted water dispensing units and staff trainings to key on-premise accounts around the world. The program has been designed as an educational tool for the trade – and ultimately consumers – that explains what the addition of water does to your Bowmore Single Malt Scotch Whisky. And that this practice is not an aberration as some might think, but can bring about another level of sensory (smell, sight) and gustatory (taste) experiences when enjoying Islay’s most balanced single malt. The Bowmore Water Program will roll out Spring 2013 in North America, Europe and Asia.

The centerpieces of the Bowmore Water Program are the exquisitely hand-crafted water dispensing units, which exude the essence of the Bowmore Distillery and are certain to be the showpiece of any bar. In each country, Bowmore will work with their distributors to identify eligible on-premise accounts that are supporters of Bowmore. Once an account has been confirmed, it will receive a Bowmore water dispenser; staff training and tasting; and Bowmore’s Water & Whisky Guide that describes in laymen’s terms the chemical reaction and science behind adding water to whisky. 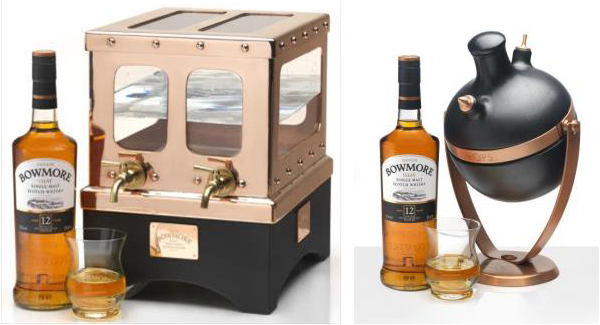 THE WATER SAFE. Hand-crafted and individually numbered, this copper water dispenser is inspired by the great spirit safe that resides within the Still Room of Bowmore Distillery. The Water Safe will ideally sit in a place of prominence behind the bar and will create the ultimate in water dispensing theater.

THE TILTER. Hand-made and individually numbered, The Tilter is a more fun and quirky dispenser that tilts on an axis and allows a fine flow of water to be dispensed from one side or small droplets from the other.
THE SCIENCE BEHIND WATER & WHISKY

Bowmore is widely acknowledged to be among the most perfectly balanced single malts in the world, striking just the right chord between smoky and sweet. The sometimes polarizing question is: why add water? Rachel Barrie, Master Blender at Morrison Bowmore Distillers worked together with the Bowmore brand team to develop the Bowmore Water Program, not to tell people how they should drink their whisky but to give whisky-lovers an option to explore and let them make up their own minds.

“Bowmore is an amazingly complex and harmonious whisky with an enigmatic flavour spectrum,” says Barrie. “The spirit takes the drinker on a sensory adventure through sweetness and ocean spices with multiple layers of fruit and smoke.  It is delicious on its own of course but if the drinker chooses to add water, different flavours emerge and take you on a new taste adventure.”

Rachel Barrie, whose scientific background includes a 1st class Honours degree in Chemistry and a stint as a Research Scientist at the Scotch Whisky Research Institute, explains that when water is added to whisky, certain physicochemical changes occur in the glass some of which you can see, smell and taste:

By example, Barrie has developed tasting notes (below) for Bowmore 12 Years Old, served neat and with 1 part water added to 2 parts whisky. Bowmore 12 Years Old is a complex and rewarding dram that combines Scottish barley, crystal clear water from the Laggan River, rich Islay peat (which both flavors the water and fires the distillery’s kilns) and a 12-year maturation in Bowmore’s legendary No. 1 Vaults.

Founded in 1779, Bowmore is the oldest Distillery on Islay. Islay malts are famous for their characteristic smokiness and Bowmore is no exception. Bowmore carefully smokes its malt and uses skills handed down from generation to generation to craft a perfectly balanced single malt.  Bowmore’s adherence to traditional production methods helps to shape the character of its single malts – they are one of only a few distilleries anywhere which still produces its own floor malted barley, hand-turned by traditional wooden malt shovels. It draws water from the Laggan River, with its rich peaty overtones, and it’s the same Islay peat that fires the malt drying kiln. Bowmore Distillery’s close proximity to the sea is also vital in determining the final character of the spirit. The famous Bowmore No. 1 Vaults is where most of the whiskies spend their time resting quietly in the cool, dark, damp cellars below sea level, oblivious to the waves thrashing the Vault’s sea-facing wall. They mature in oak casks, previously used for bourbon, sherry or claret, gradually developing rich and mellow flavors. It’s this combination of peat, barley, sea breeze, water, wood, people and tradition that together create the perfectly balanced warm and smoky character of Bowmore single malt whiskies.

The award-winning Bowmore portfolio includes Bowmore Legend, 12 Year Old, 15 Year Old Darkest, 18 Year Old and 25 Year Old in addition to special limited-edition bottlings such as Bowmore Black, White, Gold and Bowmore 40 Year Old.  Bowmore is available nationwide in the U.S. and in more than 45 countries worldwide.  The Bowmore portfolio is imported to the U.S. by Campari America. For more information: www.bowmore.com,www.facebook.com/bowmore, @Bowmore1779