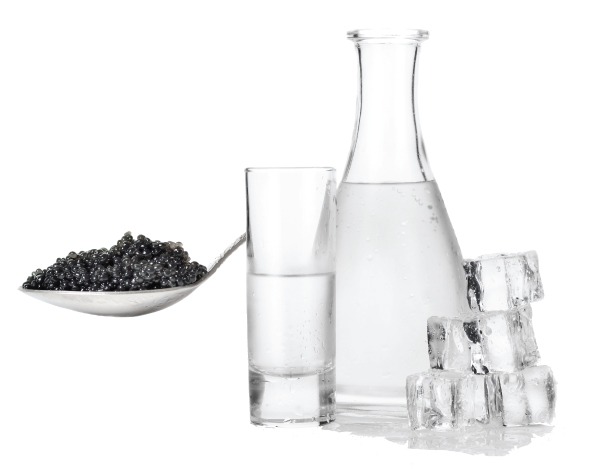 GEORGE was in Las Vegas for the weekend, playing baccarat at the Bellagio. He had just witnessed a ten-banker run with paper plays maximum, and was in need of a cold, well-made cocktail. Leaving the table with a very large stack of black chips, he proceeded to the Petrossian lounge, where, feeling a little like James Bond, he ordered a Vesper. Sipping his drink and feeling as Hemingway once wrote, “quite civilized,” he could not help noticing a young couple eating caviar and sipping what appeared to be vodka from frozen glasses. Introducing himself to the barman, Michael, he inquired, “What are they having?”

“That’s our vodka and caviar sampling!” Michael answered. “We offer three different caviars paired with three different vodkas. It’s a wonderful introduction.”
George, feeling rather flush from his recent run on the baccarat table, ordered himself one.

George finished his Vesper just as the caviar and icy vodka arrived. “Here you have Siberian, Hackleback and Transmontanus caviars paired with domestic corn, Russian wheat, and Polish potato vodkas,” Mike explained. “I would recommend skipping the boiled egg and red onion. They just get in the way of good caviar and vodka.” 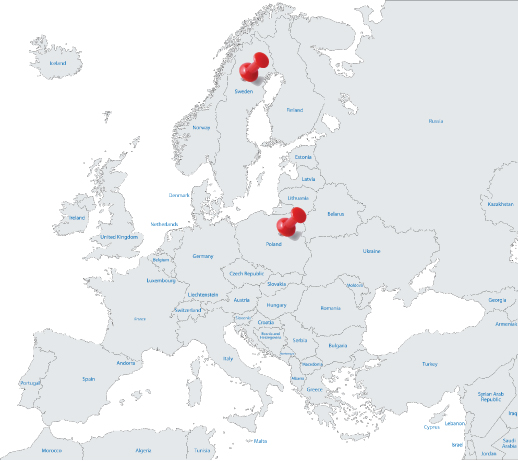 George proceeded to indulge and he was quickly amazed at how the different caviars paired with the different styles of vodka. Mike was right! All he needed was a mother-of-pearl spoon for the caviar and a frozen glass for the icy vodka! All the pairings were amazing but his favorite was the Siberian caviar with the Polish potato vodka. “Delicious!” proclaimed George, as Mike checked in on him.

“If you like the idea of pairing food with straight vodka, you should visit some of the Vodka Belt countries,” Michael explained. “Here in America it has not really caught on but in the land of vodka, it truly is a way of life!” George was intrigued. He finished the very last glistening pearls of caviar with his final sip of vodka and asked for the check.

“Send my friends at the end of the bar a glass of their favorite vodka,” George instructed.
George wanted to discover firsthand just how wonderfully vodka goes with food so he booked a flight to Sweden and Poland with his first stop in Ahus to visit Absolut. 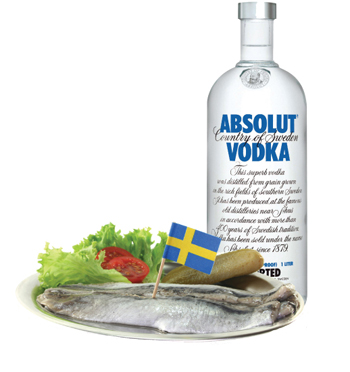 George arrived at the Absolut distillery where he was greeted by Henrik Ohlstenius who would be his guide for the day. The tour of the distillery left George not only astonished but famished and very much in need of a drink. After a quick nap it was time for dinner, which was a bit of a surprise to say the least. Henrik took him to Ovesholm, the private home of Count Raoul Hamilton and his lovely daughter Alexandra, for a traditional Swedish dinner. The meal began with pickled herring four ways and all the fixings for classic smorgasbord (gravlax, pickles, cheese, and potatoes) served with frozen vodka and beer.

The second course continued with the classics – Swedish meatballs, venison, stuffed chicken, and a unique potato dish with anchovies – all served with fabulous homemade breads and more vodka.

Dessert was a simple blend of vanilla panna cotta topped with local rhubarb and strawberries. This was a truly amazing evening, thanks to the Count’s fabulous Swedish hospitality!

The following afternoon after a quick flight to Stockholm, George checked into the Rival Hotel and it was time for dinner at Bistro-Jarl. The meal started with bleak roe (Lojrom) with the traditional sides (red onion, sour cream, chopped egg) served on a potato pancake with frozen vodka. He followed that with pickled herring and more frozen vodka, and finished with locally-caught fried perch and you guessed it, more frozen vodka. Needless to say there was no room for dessert, and with an early flight to Poland in the morning, George decided to call it a night. 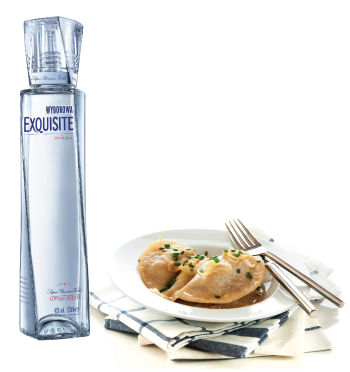 Henrik had graciously introduced George to Miranda Dickson, aka the Vodka Queen, who had agreed to show him around Warszawa. George met her at Podwale, a famous restaurant in Old Town known for serving classic Polish fare. Lunch began with two different pierogi, “Wilenskie” (potato and cheese) and “Kapusta” (sauerkraut), served with a wonderful Polish beer called Tyskie.

The second course was a dish George had only heard rumors about, called Golonka, or the amazing pork knuckle. This was served with the traditional accompaniments of boiled potatoes and sauerkraut, with two different mustards and fresh horseradish. Next came a vodka called Siwucha, founded on a 16th-century recipe based on grain spirit with the addition of a small percentage of barley spirit and extract of sloe berries. This concoction then sees a short period of aging in oak. They finished lunch with chilled glasses of Wiśniowa, traditional Polish vodka flavored with fresh cherries. As the food coma came over George, he knew it was time for a nap.

Dinner was at a beautiful restaurant named Ale Gloria. George knew eating the next meal was going to be a difficult feat as he was still feeling the effects of the massive pork knuckle. A bottle of Wyborowa Exquisite, served frosty cold from the freezer, arrived at the table and after several shots of the ice-cold elixir and many hearty rounds of “Na Zdorovie,” George noticed his appetite beginning to return. Dinner consisted of a lovely soup of local Chanterelle mushrooms with truffles, followed by a beef carpaccio and more vodka. The meal ended with frozen glasses of Wiśniowa, which George was quickly discovering he liked a lot.

It was time for George to return stateside but with him came a newfound love for pairing vodka with food, and not just caviar. “Na Zdorovie!”

In an ice-filled mixing glass, add vodka, gin and Lillet Blonde; shake until ice-cold. Strain into a chilled cocktail coupe and garnish with a large, thin slice of lemon peel.

*Although Bond created the Vesper with three parts gin, George prefers his with two parts.