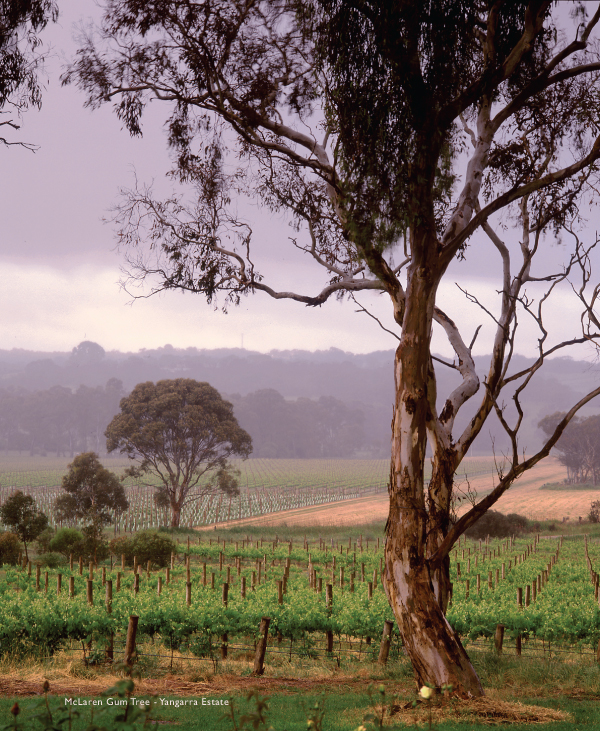 Australia’s commercial wine business started in the early 1800s, when European immigrants came to settle in the cooler southern growing regions. As they fell into the wine business, which many did after growing other cash crops, it became evident that certain areas were perfect for growing wine grapes. Fortified wines were the drink of choice in the early days, so table wine sales grew slowly. But as the years went by and consumer tastes changed, the favored fortified wines of the 1800s eventually gave way in the 1900s to people drinking varietal still wines. The vintners answered the call by producing high-quality table wine and eventually, outstanding wine — even some of the best in the world! Australia was here to stay as a major player in world’s wine production and exporting.

Australia is currently the fourth largest exporter of wines in the world with its top five export markets being the United Kingdom, the United States, Canada, Germany and China.

Here is a chronological look at some of our favorite wineries, from youngest to oldest, and their unique stories. 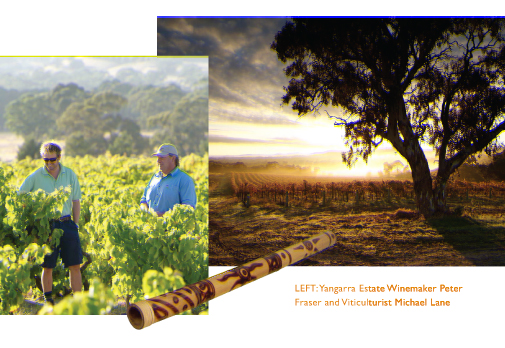 McLaren Vale, with its beautiful Mediterranean climate, is home to YANGARRA ESTATE. The property consists of 100 hectares of vineyard divided into 35 individual blocks spread amongst creeks and native vegetation. The original vines on the property were first planted in 1946 (the property was then called Lalla Rookh or “love nest”). In that year, Bernard Smart assisted his father in planting the High Sands vineyard to non-irrigated bush vine Grenache. For many years, the rich, powerful fruit planted in the sparse, sandy soil was sought after by local winemakers who used it to enhance the body of their wines.

Jackson Family Wines purchased the property in 2000 and hired local winemaker Peter Fraser, and viticulturist Michael Lane, to create a modern, biodynamic winery. They now grow Grenache, Shiraz, Mataro, Cinsault, and Carignan, with Roussanne and Viognier as the major white varieties. The new winery was designed and built by Peter to ensure that modern knowledge and equipment could combine with traditional winemaking techniques to create stunning McLaren Vale wines. They use open fermenters, maceration and skin-plunging are conducted with great sensitivity, and they only use wild indigenous yeasts. All the wines are seasoned in oak barrels – predominantly aged French – with the focus on minimal manipulation and intervention, resulting in elegant wines of concentration, complexity and texture.

The Viognier is handpicked early in the season to achieve greater fragrance and finesse, as well as a long cellar life. The Shiraz is grown at an elevation that gets cooled from night breezes from the nearby Southern Lofty Ranges and is complex and concentrated.

The Cadenzia GSM (Grenache/Shiraz/Mourvedre) is distinctly McLaren Vale, a careful blending of the three grapes, the composition of which varies from year to year and conveys the traditional estate blends of the southern Rhône. (A handful of local vintners create their own special bottlings of Grenache-based blends every year and label this wine “Cadenzia,” inspired by the musical term “cadenza,” a brief improvisational solo.)

Yangarra Estate’s lineup also includes several standouts such as Old Vine Grenache, from the bush vines planted in 1946 high on the estate’s deep sandy soils; Iron Heart Shiraz, their most elite Shiraz from a single vineyard; and High Sands Grenache, which is their most intense expression of the iconic bush vine Grenache from “the highest dunes on the leanest and meanest part of The Beach.” 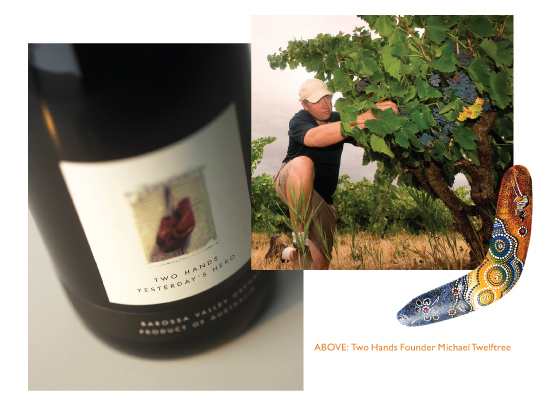 TWO HANDS refers to the very personable approach taken with each parcel of grapes, no matter how big or small. The wines are carefully guided through the viticulture and winemaking process by Michael Twelftree and winemaker, Matt Wenk. The winery was founded in 1999 by Michael Twelftree and Richard Mintz, and was named by Wine Spectator in its annual Top 100 for the tenth consecutive year in 2011, an achievement that has never been equaled by any other winery the world over. This amazing young winery from South Australia uses six regions in two states to source their fruit, including Barossa Valley, McLaren Vale, Clare Valley, Langhorne Creek and Padthaway. In Victoria, they source from Heathcote, famous for its Shiraz and red soil. The heart of the operation is in the Barossa Valley, with the winery and the spectacular “cellar door” located in the sub-region of Marananga. “Cellar door” is an Australian term used for the visitor center of a winery. “Quality without compromise” is a core value of the winery and it seems to have worked — they have received international acclaim from respected wine critics all around the world, including having Robert Parker proclaim Two Hands as “the finest negociant operation south of the equator.”

The Picture Series is the most approachable of the four, with gorgeous labels and whimsical names such as Gnarly Dudes Shiraz, Yesterday’s Hero Grenache and Brave Faces Shiraz/Grenache. These are super serious wines that receive all the winery’s attention to extract flavor, color and tannins. They are a value compared to what they are worth. 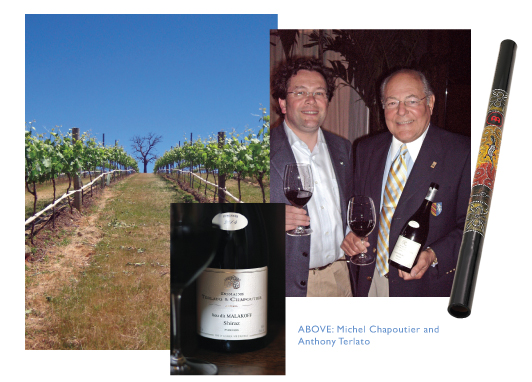 Every so often two of the industry’s great minds come together on a single project. This is one such partnership. Anthony Terlato and Michel Chapoutier, who was just 25 years old at the time, met in the spring of 1987 at the Chapoutier Winery while Tony was there to discuss having his TERLATO WINES INTERNATIONAL company represent CHAPOUTIER WINES in the United States market. Through the years, Tony and Michel would develop into close friends and business partners.

In 1998, Michel discovered an area in the Australian Pyrenees he was very excited about. It was located on an eastern-facing slope on the southern edge of the Pyrenees Hills, in western central Victoria. In the Southern Hemisphere, this creates the best sun exposure, resulting in maximum fruit development and ripeness. It was to become the Malakoff Vineyard. “The region’s soil could produce great wines,” according to Chapoutier.

Michel asked his good friend Tony to be his partner in the venture. After visiting the property in the Pyrenees, Tony wholeheartedly agreed and the partnership of TERLATO & CHAPOUTIER was formed. Terlato spoke of the offer saying, “When Michel asked me to join him, I found it was impossible to say no.”

Their effort paid off and even impressed super-critic Robert Parker. After a barrel tasting of their first vintage, 2004, Parker awarded the Terlato & Chapoutier Malakoff a 90-92 rating and wrote in his 10-25-04 Wine Advocate, Issue 155, “Produced from Pyrenees vineyards cropped at 10 hectoliters per hectare, boasts sumptuously concentrated fruit (blackberries, cherries) in addition to melted licorice, espresso roast, and smoke characteristics. Ripe, opulent, and medium full-bodied, if this delicious 2004 gets into the bottle without being fined or filtered (Chapoutier rarely fines or filters), it will be a lusty Australian blockbuster to enjoy in its first 7-10 years of life.”

Domaine Terlato & Chapoutier produces the flagship lieu dit Malakoff Shiraz, and a Shiraz-Viognier in the state of Victoria, which is a blend practiced in France’s renowned Côte Rotie — a style with which Michel is obviously familiar and is an expert in its execution. They also produce an L Block Shiraz from a dry farmed, “L” shaped block on a southern exposed slope. The unique shale and iron rich soil of the block creates incredible complexity in the wine. 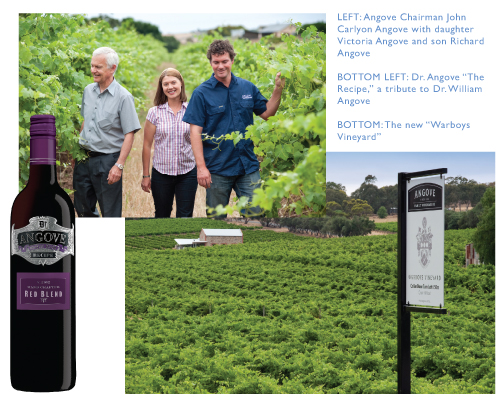 ANGOVE FAMILY WINEMAKERS has been in business since 1886, when Dr. William Thomas Angove established a medical practice in Tea Tree Gully in the beautiful rolling foothills a short ways from the budding city of Adelaide, South Australia. It was not long after his arrival that Dr. Angove began experimenting with vines and winemaking, initially as a tonic for his patients, much like Dr. Penfold did. His early wines were made from grapes grown in his own vineyards, as well as those from the Warboys Vineyard owned by neighbor Henry Hall. By the time of Dr. Angove’s death in 1912, his efforts had expanded to become a serious family business known as Angove and Sons, St. Agnes Vineyards.

The third generation, Thomas William Carlyon Angove (1917-2010) always had an interest in the family business. He studied enology at Roseworthy where he graduated top in his class. The driven, intelligent man was appointed managing director in 1946 and began a new era of development that included the planting of the Nanya Vineyard, which at the time was the largest single vineyard in the Southern Hemisphere. Sadly during this time, the exploding population of Adelaide had reached the original vineyards around Tea Tree Gully and the land was forcibly acquired by the state government for housing programs. The last Angove Winery harvest at Tea Tree Gully was in 1979. Regardless, Thomas and the company continued to prosper and develop new technology, including being responsible for the early development of the “Bag in Box” format in 1965.

In 1983, the fourth generation of the family, John Carlyon Angove, succeeded his father as managing director of the company and is now chairman. John proceeded to redevelop all aspects of the business, including the successful re-branding of Angove Family Winemakers. In 2008, he purchased a historic vineyard in McLaren Vale located in the Seaview sub-region and re-named it “Warboys Vineyard,” after one of the original vineyards they cropped from in the 1800s. This is also the site of their new cellar door.

The fifth generation of Angove’s, John’s son Richard and daughter Victoria, are also both actively involved in the family business. Victoria currently sits on the board of directors while raising the sixth generation and Richard is driving the development of the McLaren Vale business. It appears this story will not end soon; the Angove is a classic generational Australian family winery celebrating its lineage and future.