When Shakespeare said, in Act IV of “King Lear,” “The stars above us, govern our conditions,” was he foretelling our reliance on Yelp and TripAdvisor? Do the stars/ratings govern our actions?

It’s widely assumed that many customers consider the ratings on social media review sites when making their eating and drinking decisions. In fact, a widely-quoted University of Berkley study published in The Economic Journal in 2011 stated, “An extra half-star rating causes restaurants to sell out 19 percentage points (49%) more frequently, with larger impacts when alternate information is more scarce.” Moreover, in many businesses such as hotels, the ratings may factor into the managers’ bonuses.

But what do star ratings really tell us? What cocktail flavors are customers buzzing about today? The stars won’t tell you (but I will). 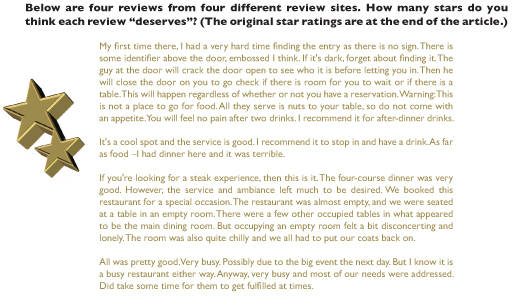 The point of this exercise isn’t to look at the “dumb reviewers” or “poorly written reviews.” The point is that reviews contain positive statements and negative statements, and stars don’t reflect this balance in a consistent or meaningful way.

It’s the comments themselves that tell the real story. Within the text of comments and reviews lies a treasure trove of meaningful data, if you can just get at it. Sure, you can read every review of your establishment, and you should; then read your competitors’ reviews. But, will you realize for example, that bar snacks are mentioned in 17 percent of your negative comments and that 12 percent of your bar’s reviewers who said they won’t return, mentioned bar snacks? Which brings me to lemon/lime and the Cocktail Fruit Index.

A number of social media monitoring companies offer services that help companies play successfully in this arena. Nearly all of them will measure sentiment and help you engage the community, and more. For an operator, the Holy Grail of social media information must be the extraction of quantifiable, actionable data.

A company that specializes in social intelligence for restaurants, bars and hotels is newBrandAnalytics. To illustrate the depth of their services last year, they applied their algorithms and other resources to a group of 84 higher-end restaurants/bars. They created a Cocktails Fruit Index from the thousands of reviews they analyzed, and found more call-outs for lemon and lime flavors than any other fruit flavor profile. In other words, when the customers of these 84 restaurants were talking cocktails, they were buzzing about lemon/lime more than any other fruit. Mango/passion fruit was second.

But the point here isn’t lemon/lime popularity, or even bar snacks. It’s this: If you can harvest the data from reviews and comments of your customers and your competitors’ customers, you’ll be positioned to make better operational decisions to win the stars wars. Look into these services now, for as Shakespeare said in “Julius Caesar,” “It is not in the stars to hold our destiny, but in ourselves.”

Some examples of social media monitoring and analytics companies: