INEDIT was created by the globally-acclaimed chef Ferran Adrià along with the team of sommeliers from the world’s best restaurant*, elBulli, in cooperation with Estrella Damm’s brew masters.

“INEDIT was developed out of the belief that there was a need for a beer that could complement a dining experience,” states Ferran Adrià, elBulli’s former executive chef. “INEDIT is the fruit of more than a year and a half of research and 400 test trials between the master brewers of Estrella Damm and the team of sommeliers at elBulli.”

INEDIT is a unique union of barley and wheat malt, with a blend of spices providing an intense, complex aroma featuring coriander, orange peel and licorice. It is an alternative to wine for accompanying food dishes, from informal to the more exquisite, sophisticated food types. This includes the more challenging culinary pairings such as dishes containing citrus, vinegar-based sauces, light starters and salad. Bitter notes, such as asparagus and artichokes, and oily textures of fish are also nicely complemented. It has always been a challenge for sommeliers trying to accommodate different types of cuisines – now there is INEDIT!

Unlike most beers, INEDIT is bottled in a 750 ml black wine bottle and is intended for sharing. It’s best presented chilled in an ice bucket and served in a white wine glass, half-full. Some restaurants may also include it on their “wines by the glass” menu as an alternative to wine and describe it as ‘INEDIT- a beer created by Ferran Adrià, the world’s most award-winning chef, to pair with food.’ 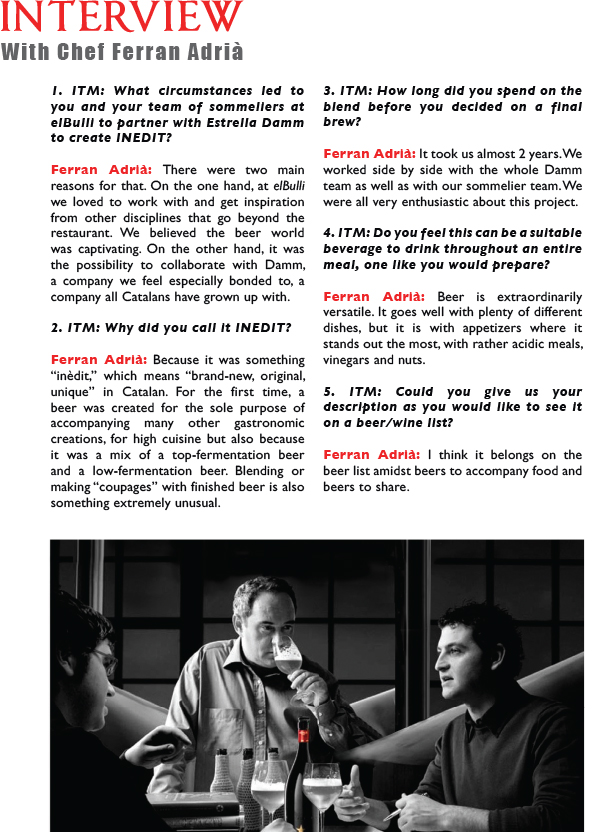