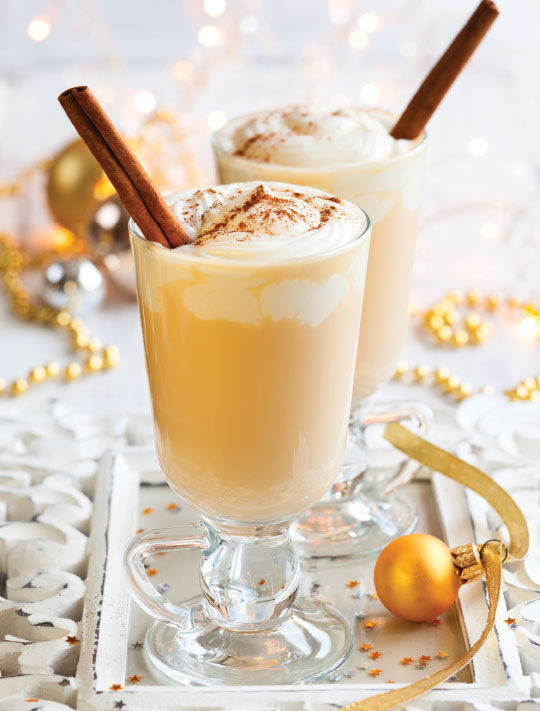 George loves the holidays, even as a bon vivant who travels the world in search of life’s finest indulgences. He loves the simple pleasure of the tradition of sharing a festive tipple with one’s friends and family. The holidays are just better celebrated with friends and the ritual of communal beverages, be it a big bowl of punch, a steaming cup of hot buttered rum, a glass of eggnog or a mug of Tom & Jerry.

Finding himself in Las Vegas for Thanksgiving, George accepted an invitation for cocktails from his good friends from Germany, Walter and Christa. He didn’t want to arrive at their home empty handed, so he made up a batch of his homemade hot buttered rum batter, which he placed in a reusable ceramic jar and paired with a bottled of aged rum. When George got there and the door opened, he was greeted not only by Christa but also by the wonderful smell of baking spices.

“Hello, and what smells so amazing?” George inquired.

“Walter is making ‘glühwein.’ Come on in!”

George found Walter in the kitchen attentively overseeing a large pot on the stove, which was producing the delightful aroma.

“What are you making?” George asked.

He went on to explain that virtually every nation has their holiday beverage of choice and in Europe, mulled wine is always very popular. Each country makes it a little differently, putting their own special twist on the basic recipe of red wine, sugar, spices and fruits. Also, each country has its own name for it. In Germany, they call it “glühwein”; the French, “vin chaud”; the Romanians call it “vin fiert”; and the Italians call theirs “vin brulé.” But it is the inhabitants of Scandinavia who call it “glögg.”

George found Walter’s glühwein to be rich, sweet, spicy and downright delicious. Served with his special deviled eggs and chicken salad with warm, crusty French bread, it was the perfect combination to warm both the heart and soul.

After several mugs of Walter’s steamy brew, George thanked them both for their wonderful hospitality and wished them a happy Thanksgiving season. He also left with a newfound interest and appreciation for this communal beverage known as mulled wine and a desire to explore this wonderful drink’s origin.

George returned home and sent a letter to his friend, Henrik Ohlstenius, who works for Absolut Vodka in Sweden, inquiring about their Christmas traditions, the heritage of mulled wine and in particular, that of glögg. In short order, he received a letter back from Henrik containing just one sentence, “Come and visit!” Well, that was all the convincing George needed and he quickly booked a flight to Åhus, Sweden.

George arrived and was met at the airport by Henrik, who suggested a quick lunch before he dropped George off at his hotel. They enjoyed small plates of bleak roe (Löjrom) with the traditional sides (red onion, sour cream, chopped egg) served on potato pancakes, pickled herring and fried perch, all served with icy glasses of frozen vodka.

After a quick nap, it was time for dinner, which was a bit of a surprise to say the least. Henrik arranged dinner at the private home of Count Raoul Hamilton and his lovely daughter, Alexandra, for a traditional Swedish meal prepared by Per and his son, Claes, of Kipppers Restaurant. The meal began with pickled herring four ways, a cream cheese tart and all the fixings for classic smorgasbord (gravlax, pickles, cheese, potatoes) served with frozen vodka and beer. The second course continued with the classics — Swedish meatballs and gravy, venison, stuffed chicken — and a unique potato dish with anchovies and pickled cucumbers, all served with fabulous homemade breads and more vodka. Dessert was a simple blend of vanilla panna cotta topped with local rhubarb and strawberries. Then came the glögg, served piping hot, which was amazing: rich red wine supporting strong notes of cinnamon and cardamom spice, orange citrus and sweet raisins, with the additional fortification the vodka provided. It was the perfect end to a wonderful meal. George was taken by the count’s delightful hospitality and how proud he was to share his Swedish heritage — drinking, eating and singing! 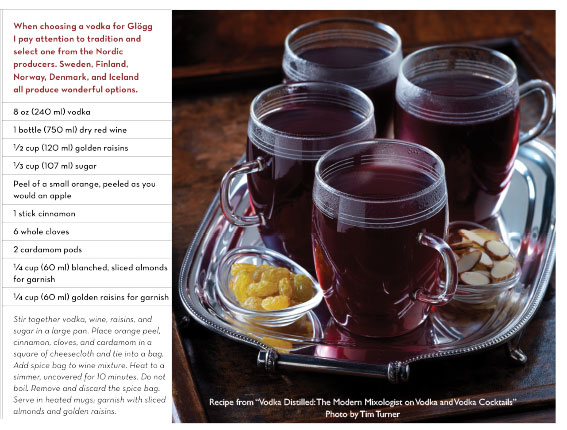