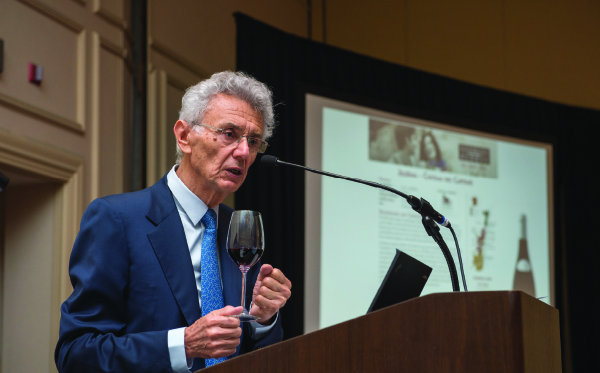 The Society of Wine Educators, founded in 1974, held its 37th annual conference at the Renaissance Orlando at SeaWorld this past July 31 through August 2. The two-day pre-conference schedule included reviews for the different certification levels and the exams themselves. The conference then comprised three days with over 50 seminars, evening receptions, pop-up tastings, bonus sessions and networking opportunities.

This year proved to be another exceptional function. Georges DuBoeuf (above) opened the ceremonies with a look at Beaujolais like only he can do. At 80 years young, he is still the premier name in Beaujolais, and has always been a prolific supporter of the region and its wines.

Pink Champagne: Fluffy Fiction or Profound Pleasure by Seth Box, Director of Education for Moët Hennessy USA, started off the seminar series with a bang. We tasted six remarkable pink Champagnes including Ruinart, Krug, Veuve Clicquot, and the remarkable and rare prestige cuvee, 2002 Dom Perignon. It was an hour and a quarter of pure enlightenment and tasting bliss.

I attended many seminars during the course of the conference’s three days, with highlights such as The Rutherford AVA and Great Red Wines of Tuscany, by Paul Wagner of Balzac Marketing (if you get a chance to see him work, do it — he’s a great speaker); What’s My Wine? by ITM contributor and Johnson and Wales Associate Professor, Ed Korry; and The Diversity of Napa Valley by Trinchero’s Barry Wiss. But it’s not just about wine at the SWE Conference — bourbons, Scotch whisky, bitters and the cocktail evolution were all discussed.

My favorite seminar was the last one of the conference, Barolo vs. Brunello: A Clash of the Titans. In this session set as a courtroom-style drama, each side presented their case for which one is “Italy’s Greatest Wine.” The “attorneys” were Don Kinnan for Brunello, against Nicholas Poletto for Barolo! The “courtroom” was presided over by Kobrand’s Missi Holle, and everything was kept in check by the “bailiff,” SWE’s own Shields Hood. After testimony was presented by both sides and six perfect specimens were tasted, the jury picked Brunello as Italy’s greatest wine! I’m sure there will be an appeal next year in Seattle.

The society’s goal is to foster and promote professional individual education and the development of the wine industry as a whole, and they make it a fun time. If you are responsible for training or working with fine wines for your establishment, you should seriously consider this program.