Duck Commander Wines are the perfect pairing
for the January 15, 2014 season premiere of Duck Dynasty 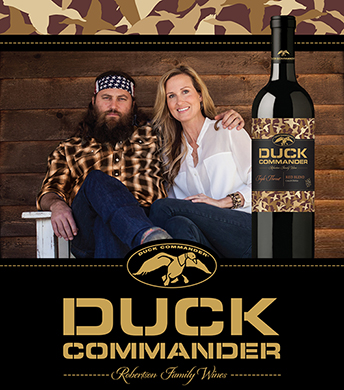 Over the holiday season, many stores sold out of stock of Duck Commander Wines, which launched in limited markets in November with three varietals: Triple Threat 2011 Red Blend, Wood Duck 2012 Chardonnay, and Miss Priss 2012 Pink Moscato. The expanded distribution of the wines is good news for consumers who host or attend weekly Duck Dynasty viewing parties. With 11.8 million viewers tuning in for the Season 4 premiere, Duck Dynasty became A&E’s #1 non-fiction cable program to date.

About ¾ cup mayonnaise or salad dressing

2.    Cut the eggs in half lengthwise. Gently scoop out the yolks with a spoon and put them in a bowl.  Add the relishes, mustard, mayonnaise, and salt and pepper.  Mash all the ingredients together, then taste.  Add more mustard, salt, and pepper if you think it’s needed.  More mayonnaise can be added if it seems dry.

3.    Spoon back into the egg whites. Sprinkle with paprika, if desired.

Duck Commander is a family-owned and operated business that was established in 1972 by Phil Robertson and based in West Monroe, Louisiana. What once began as a duck call centered company has grown into a multi-million dollar empire with Phil’s four sons, Willie, Jase, Jep, and Alan, and their wives at the helm. Duck Commander products, which now include much more than just duck calls, have been sold in all fifty states and in several countries and encompasses lifestyle brands including Duck Commander duck-hunting merchandise, Buck Commander deer-hunting merchandise, Duck Girl apparel, Duck Commander Wine, and more. Each of the Duck Commander brands was created with a focus on bringing family together. It is their motto of faith, family, and ducks that has resonated with fans at their speaking engagements and on the No. 1 cable show “Duck Dynasty.” Their perseverance, business savvy and knack for storytelling also landed them at the top of the New York Times’ Best Sellers list three times with titles “The Duck Commander Family,” “Happy, Happy, Happy: My Life and Legacy as the Duck Commander,” and “Si-cology.” This fall the family celebrated their first venture into music with a No. 1 debut of their holiday album Duck The Halls: A Robertson Family Christmas. For more information, please visit www.duckcommander.com.