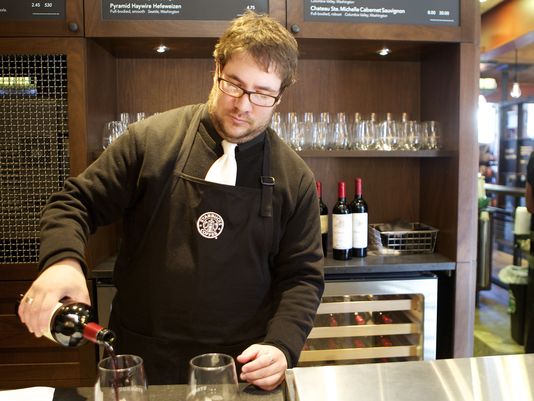 Don’t be surprised if you soon get carded at your neighborhood Starbucks.

Like others in the ultra-competitive restaurant world, the coffee giant plans to expand the number of domestic locations that sell alcoholic beverages.

What began with a single Seattle Starbucks location selling beer and wine in 2010, has slowly but methodically evolved into 26 locations. That’s about to go into hyperdrive. Within the next several years, the alcoholic beverage platform will expand to thousands of locations, spokeswoman Lisa Passé says.

“The concept is a natural progression for Starbucks as we seek to create a new occasion for customers to gather, relax and connect with each other in the evenings,” Passé says.

Starbucks once again finds itself at the leading edge of an industry trend on the grow. Not only are sales of alcoholic beverages lucrative, but they attract night-time customers, when business typically slows down. The risk is turning off customers who don’t want to be part of that environment. The chain has seen little blowback in its slow expansion of beer and wine sales, which will reach 40 locations by the end of this year.

Some unlikely restaurants have increasingly embraced sales of alcoholic beverages in recent years. Applebee’s has heavily marketed its alcoholic beverage sales. Red Robin earned some recent social-media buzz when it began to roll out wine shakes – a few years after rolling out beer shakes. Burger King gave it a go, when it began selling beer and burgers four years ago at its new concept, the Whopper Bar in Miami Beach’s tourist-heavy South Beach. Three years ago, Sonic began to sell beer at a couple of its Florida locations.

Among other things, wine and beer sales can substantially boost the average ticket at Starbucks. At Wednesday’s annual shareholders meeting, CEO Howard Schultz noted that the typical Starbucks customer spends about $5 per visit. A glass of beer or wine can instantly double that figure. “We are in the early stages of our growth and development,” Schultz said. “If we’re a 20-chapter book, we are only in chapter four or five.”

One of those chapters could be the careful evolution from coffee to alcohol. There are no plans for alcoholic beverages beyond wine and beer, Passé says, nor are there plans to expand the program outside the USA.

Even then, coffee rules. “In the true spirit of a traditional coffeehouse, while some stores may serve wine and beer,” Passé says, “coffee will remain the focus of the experience.”