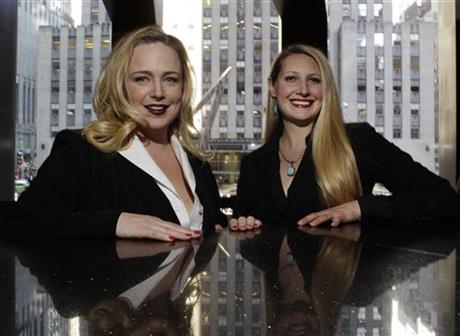 Kristin Beckler, left, and Crystl Faye Horton-Friedman, right, pose for a photo at Del Frisco’s in New York. Both women are mothers and work as sommeliers at the restaurant. More women are moving up the wine ranks, said Dorothy Cann Hamilton, founder and CEO of the International Culinary Center. (AP Photo/Frank Franklin II).

This Mother’s Day, sommeliers will be on hand to help you select just the right wine to go with that special meal out. And some of those somms will be moms.

Though it’s still very much a man’s world, more women are moving up the wine ranks, says Dorothy Cann Hamilton, founder and CEO of the International Culinary Center which has branches in New York and California. For the 2012 and 2013 school years, 60 percent of the 251 graduates in the schools’ sommelier programs were women.

And at the California branch of The Culinary Institute of America (CIA, Greystone), the Accelerated Wine & Beverage Program, designed to train future sommeliers and wine industry leaders, has enrolled more women than men, looking at overall numbers for the four years the course has been offered.

It comes down to simple economics, says Cann Hamilton. Women already work in front-of-house positions such as waitress and hostess, and when they realize that sommeliers tend to make more money, it makes sense to get the training.

Crystl Faye Horton-Friedman, a certified sommelier working at Del Frisco’s Double Eagle Steak House in Manhattan, started out as a bartender working to support her acting ambitions. But it wasn’t long before she realized that sommelier was the role she wanted to play since she loved wine and enjoyed interacting with customers.

“I didn’t really know at first that it was so male-dominated,” she says. “You very quickly understood that it was.”

Back when she started, she’d sometimes get customers who wanted to know, “Where’s the wine guy?” It made her a little her nervous. But “I started saying to people, ‘Well, now you got the wine babe. How about that?’ I just kept going to school and learning more things and I knew that anything people could throw at me, I could back up with facts and knowledge.”

These days there are four “wine babes” at Del Frisco’s, including fellow sommelier Kristin Beckler.

“Getting someone to trust you is the biggest obstacle to overcome because they are expecting a man to talk to them about wine,” says Beckler. “Once you can win their trust, then they become these really loyal guests.”

Beckler has a 4-year-old son and Horton-Friedman has a 6-year-old and 13-month-old. Like other mothers, they juggle their responsibilities. Both enjoy being able to spend days with their young children since they generally work at night, though the flip side to that is things get tougher when the kids go to school. “Right now, it’s been the best thing,” says Beckler.

On the job, neither woman tries to overawe customers with their wine knowledge. “You take your ego right out of it,” says Horton-Friedman.

When dealing with a somm of either gender, Horton-Friedman has an important piece of advice: Tell them what you want. “Don’t be afraid of the sommelier,” she says. If you want a certain price range say so, and if you end up not liking the somm’s suggestion, don’t be too intimidated to say so.

“Wine is fun,” says Horton-Friedman. “It’s not supposed to be stressful or confusing.”

In California, Lisa Redwine, a certified advanced sommelier, is taking things to the next level, studying for the title of master sommelier, the highest and most rigorous level of certification.

Redwine, who is director of restaurants and beverage operations for The Marine Room, The Shores Restaurant and the La Jolla Beach and Tennis Club in San Diego, Calif., has been working as a sommelier for the last 15 years ago, a job she was drawn to while working at a restaurant where she noticed “the somms looked like they were having so much fun.”

As a mom to two boys, ages 5 and 10, she has tried to balance work and family, with family taking precedence some of the time and work other times.

She hasn’t found working restaurant hours a hindrance, though she has had to make some adjustments. Thanksgiving is celebrated, together as a family, but the Sunday before. And at Christmas, no need for the kids to wait impatiently until their parents awake. She has them up at 5 a.m. to make sure she won’t miss present-opening before going to work.

“I don’t think they know any different, so for them it’s fine,” she says.

And about her last name – it is perfect for her job, though she wasn’t born with it. Redwine is her husband’s last name. “It shows I have exceptional taste in dating,” she jokes.

Her advice for young women considering a career as a sommelier?