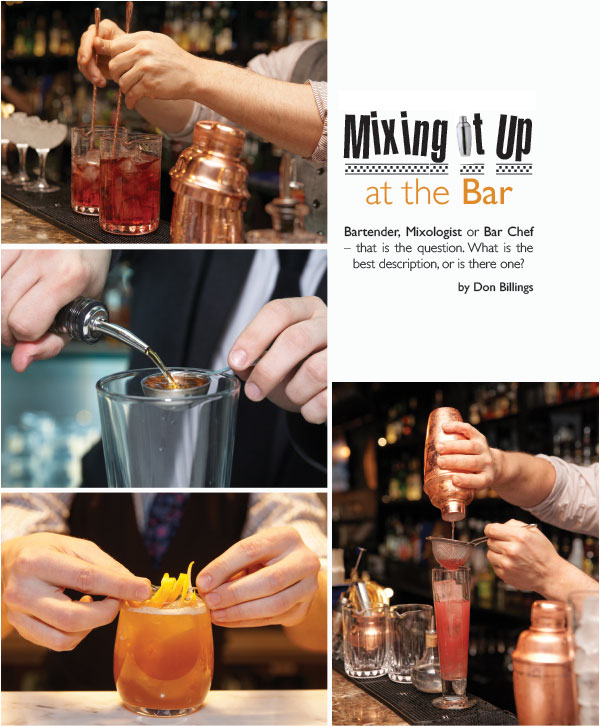 In the on-premise, we talk a lot about Mixologists in the same breath as we talk about bartenders, and we are constantly asked, “Are they the same or are they different, in definition?” There have been several articles and blogs discussing the subject over the past few years. And there doesn’t seem to be a complete acceptance of what the two really represent. And to stir things up even more, the professionals have thrown in additional descriptors just to muddy the water, like “Bar Chef” or “Liquid Chef.”

I once read somewhere that a bartender was like a pharmacist with a limited inventory.

Within the professional bartending community, there are mixed reviews. Some want to ban the word “Mixologist” from use, and many embrace it. In recent years, our magazine has come to accept the use of “Mixologist” for the on-premise.

My observation is that nothing remains the same but change itself. As the traditional role of a bartender has changed and technology has advanced, a renaissance of sorts has moved the cocktail to the center of consumer interest. So to get a better understanding of how our industry views the position of bartender versus Mixologist today, I have enlisted some top professionals who have been on both sides of the stick, to tell us in their own words how they interpret the great debate. 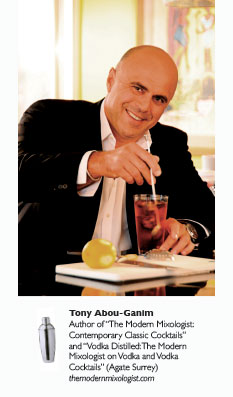 “This is a great topic and one that deserves some ink. I believe that we are all bartenders first. That said, there are many different kinds of bars, many of which I would never order a Negroni at but the bartender greets me with a smile, a warm welcome, a handshake, calls me by name, pours me a perfect pint, knows what the stock market did, if the Lions won or lost, knows where to get the best burger in town, and asks about my family. This is known as the art of hospitality – this is the art of the bartender, first and foremost. Now if a bartender’s interests, and those of the bar they’re employed at, focus on the art of mixology, both classic as well as modern interpretations, then the bartender has developed another skill level through study and creative practice. We should and do have a name for this and it is ‘mixology.’ Today the USBG also offers accreditation to those who apply themselves through study to achieve the title of Mixologist and I do believe there needs to be certification, much like there is in the wine and now beer worlds, that recognizes this effort, before one attaches the title of Mixologist. But this said, – and I repeat, we are all bartenders – one cannot become a Mixologist without being a bartender. This is not some new title that has just presented itself along with this great resurgence in the craft – it is a title that dates back to the mid-1800s and shows up in many of the great old cocktail books (see below). I believe this definition still rings true today!”

According to the historian and author of “Imbibe!,” David Wondrich, the term “Mixologist” first appeared in print in a story published by Charles G. Leland in 1856, in an issue of Knickerbocker, a New York literary journal. Wondrich explained to me that, because there was “no word for a bartender who has unusual interest and expertise in mixing drinks, people [started] using ‘Mixologist.’ The Washington Post later acknowledged this when it said, ‘When [bartenders] become especially proficient at putting odds and ends of firewater together, they become Mixologists.’”

Today the USBG offers an accreditation that solidifies the credibility of “Mixologist.” 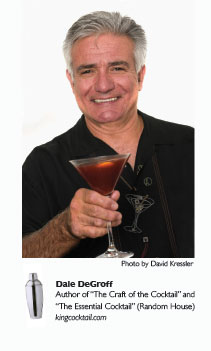 “The year was 1988, the first full year of the revivalist drinks program at the Rainbow Room in New York City. In my journey through the world of 19th century mixology, I excavated the word ‘Mixologist’ out of obscurity, where it was probably wisely forgotten. Hell, it wasn’t even in the dictionary – not even the New York Times dictionary of slang – and it may not be yet; I haven’t checked the new editions.

Barmen of the 19th century possessed a highly developed set of skills that were necessary to successfully operate a drink bar back then. Bar books of the day contained manufacturing guides for preparing many products bartenders today take for granted, like bitters and flavored syrups. They had to build their own filters and some of the other apparatus they used in the preparations. Needless to say, they based their preparations on real ingredients, not artificial facsimiles.

The 19th-century manufacturing guides included recipes for juniper Brandy, mint Brandy, orange Brandy, peach Brandy, peppermint Brandy, raspberry Brandy and spice Brandy, each made from fruits, spices, and herbs oils. Often spirits like whiskey were delivered full strength in barrels from the still and were then rectified by the bartender. Ice was delivered in blocks and the bartender processed it into cubes, cracked ice and crushed ice.

I was channeling these times when I dubbed myself ‘Master Mixologist.’ I wanted to draw attention to the Rainbow Room and our revivalist drinks program. I wanted the notoriety even though it came with a large measure of scorn from lots of my bartender pals. David Wondrich, house historian to the cocktail community, will tell you that even in the 19th century it was sometimes applied with a large dose of sarcasm. I thought the tradeoff would be worth it and indeed it was; we got plenty of attention at the Rainbow room and little hooks like ‘Master Mixologist’ had an important part to play. I have been answering questions from journalists about it since then, and each and every time have tried to diffuse the issue with that simple explanation.

I don’t fault the bartenders who refer to themselves as a ‘Bar Chef’ for the same reason. I chided young bartenders for years to look to the kitchen for the professionalism they needed to approach their craft. I can hardly fault them now that they have.

Times have changed and the craft bartending movement has caught fire around the world. We have reached a place and a time in the reinvented profession when we have to add meaning and significance to the terminology. The day of the self-proclaimed ‘Master’ has passed; ‘Master’ is a classification that must be awarded on merit. The USBG is growing exponentially and is in the position to be the authoritative body in the United States to administer the testing, and bestow the final and highest accolade achievable in our profession, that of ‘Master Mixologist.’” 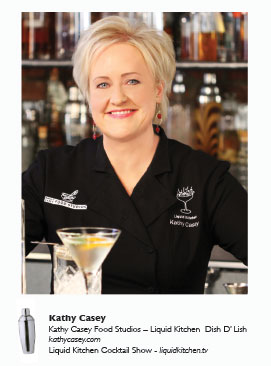 “I call myself a Bar Chef and a Mixologist. I started as a chef and then gradually moved into the bar as well – I saw a huge opportunity there 18 years ago! In our work with clients, Liquid Kitchen brings the kitchen into the bar as well as thinking about the sensibilities of the bar and incorporating operational efficiencies.

I create cocktails using my experience as a chef and knowledge of flavors. It’s all about balance and layers of flavors. Like in the kitchen, there are cocktail templates and classics, just like the mother sauces. Building upon the basics with creative twists – or sometimes just creating something totally new, there are so many opportunities to keep raising the bar in all ways. Whether it is Bartender, Mixologist or Bar Chef – it’s all about putting out great cocktails for the guest.” 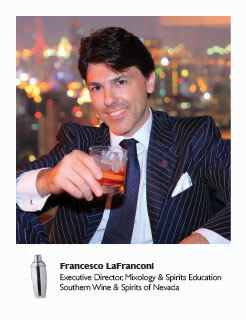 “To be honest, I would like to use the title ‘Barman.’ In the U.S. it is not common, but I feel that the term ‘bartender’ has been used too freely by anyone who steps behind the bar and pours a drink without having people skills or bartending expertise (from college gigs to tailgating events). What I perceive from the public opinion is that a bartender is ‘just’ a bartender and does not give justice to the level of preparation that some great professional and committed bartenders truly have acquired working behind the stick. I personally do not mind to be called bartender myself and I truly believe is a noble profession because I live the craft everyday. However, considering the evolution of the trade through culinary techniques and innovations, along with implementation of savory ingredients, I feel that those who can master their craft at a certain level should be called ‘Chef de Bar.’ I am a firm believer that you must be bartender at heart first, and then you evolve based on your skills, studies and innovation. I do not like the term ‘Liquid Chef’; reminds me of a TV dinner dish (no offense to other colleagues though). I’m wondering if chefs dealing with food items and not liquids are considered ‘solid chefs.’

Although the term ‘Mixologist’ is often abused as well, it is very impactful and embraces the art of mixing without (to my opinion) bartending skills – more science and techniques, not necessarily showcasing people skills and savoir-faire. You do not need to be a great host to be a Mixologist, but you should still be capable to share a smile with your guests.” 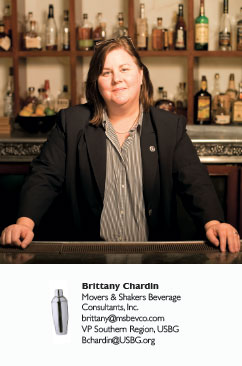 “It is certainly an ongoing conversation and one I have numerous times a week when conducting bartender trainings.

Much like the distinction between a cook and a chef: a cook follows recipes and a chef can whip up something tasty from what you have on hand in your dubiously stocked kitchen. Chefs understand ratios and ingredients and can make on-the-spot substitutions. Mixologists, too, have an enhanced focus on and understanding of the components of the drinks they make. They understand balance and know what each ingredient contributes to the overall drink. They also probably have strong brand preferences and are always on the lookout for the best ingredients.

I might have days that are spent on mixology or cocktail development, when no guests are present. But the minute I open the doors or step behind the stick, I have to tend to my bar as my first priority.

The challenge with the concept of Mixologist – and what causes some bartenders to have push back on that very scientific sounding term – has sprung from some folks’ switching the primary focus of the beverage experience to what was in the glass and away from the guests and their overall experience. It also came from a period when drink menus were getting a little too esoteric for the casual cocktail enthusiast and ticket times became secondary.

However, I agree that it is important that we find a way to distinguish those who pursue excellence and those who work to a different standard. That is the impetus of all these terms: Mixologist, Bar Chef, and Bar Ninja. For me, when guests are in front of me, tending the bar is always the primary focus. Some people want to know and be entertained by what you can do with all the interesting bottles of spirits and bitters you have behind you, and for them you put on your mixology hat. I gladly will delve in to the minutiae of mash bills. But I can’t forget the next guy who just wants his silverware on the bar before his burger comes out and to not have to wait five minutes for his Bud refill.

As Mixologists, we still have to remember we serve people drinks, not drinks to people. Tending to guests’ needs is always top priority. A great night behind the stick is a wonderful mix of both.”

In closing, I hope this resolves all questions related to this matter. I say this with the same conviction one might have comparing a glass half-full to one half-empty.