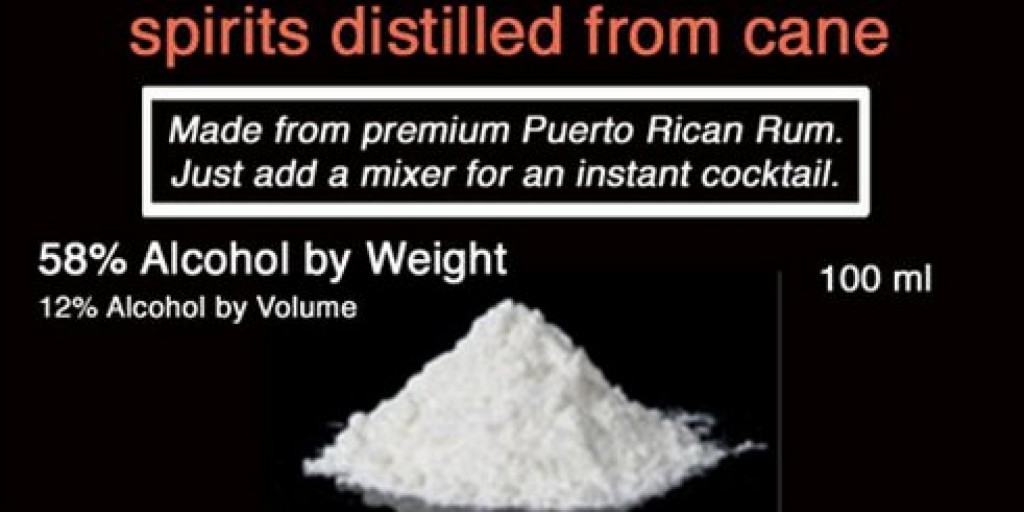 Well, this sure is a terrible idea. The U.S. Alcohol and Tobacco Tax and Trade Bureau has reportedly approved a forthcoming product called Palcohol, an alcoholic powder that comes in flavors including Cosmopolitan and Kamikaze.

We can practically hear the chorus of stomach pumps now.

Although Palcohol’s current website is light on details, a cached version (hat-tip to Eater) suggests that safe alcohol consumption is not one of the company’s top priorities: “Maybe you’re a college football fan. So many stadiums don’t even serve alcohol. What’s that about; watching football without drinking?! That’s almost criminal. Bring Palcohol in and enjoy the game.”

In addition to simply adding the powder to water, the site also proposes that Palcohol can also be mixed into food. “Sprinkle Palcohol on almost any dish and give it an extra kick. Some of our favorites are the Kamikaze in guacamole, Rum on a BBQ sandwich, Cosmo on a salad and Vodka on eggs in the morning to start your day off right.”

Tongue-in-cheek marketing it may be, but fine print “let’s be real here” disclaimers probably won’t stop people from using its products, which seem to hover in the 55-65% ABV range, in dangerous – if not outright criminal – ways.

And, we should never forget that truism: If you powder it, they will snort it. “Yes, you can snort it,” the company wrote the cached site. “And you’ll get drunk almost instantly because the alcohol will be absorbed so quickly in your nose.”

Perhaps realizing that such a cavalier attitude wouldn’t endear it to critics of binge-drinking, Palcohol has clarified its stance on its current site: “[People] visited this website that we thought was under the radar because we had not made a formal announcement of Palcohol….[The] verbiage that was copied was still in draft mode and the labels that were up were incorrect. So please disregard what is being printed as a result of information taken from this site.” It goes on to remind future customers to use Palcohol “in a responsible and legal manner.”

Sure. If there’s one thing that young Americans can always be trusted to do, it’s use alcohol responsibly.