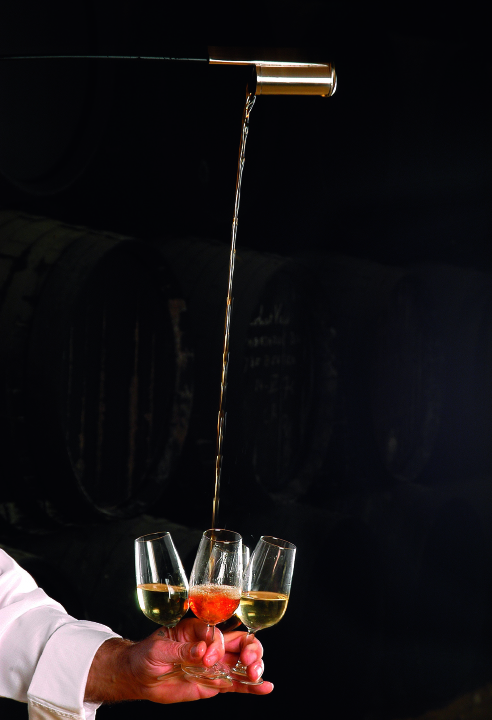 Using a venencia, a traditional small, elongated silver cup attached to a whale baleine that is inserted through the bunghole and the veil of flor (layer of yeast that rests on the wine) without disrupting it, to obtain the Sherry and pour it into a copita.

Sherry is a wine that manifests itself in many different styles from the Andalusia region of Spain called Jerez-Xérès-Sherry. Unfortunately, it is all too often perceived as a generic wine that lacks all the diversity of styles and finesse or power that the wines of Sherry offer consumers. This historic southern tip of Spain is blessed with unique varietals, terroir of chalky albariza and sandy arena soils, and climates of both cool Atlantic poniente winds and hot Saharan levante winds.

The wines of Sherry are amazingly low-priced, given the labor of love and investment of time required. They are truly one of the great wine values of the world and with such a breadth of style that they can appeal not only to all types of wine consumers but also can be used as the basis for wonderful cocktails. The challenge is that one may need a little education to overcome perhaps previous less-than-sterling experiences and to recognize the style being offered. For example, an issue frequently encountered at restaurants is being offered a fino style Sherry by the glass that has been opened for not just days, but for weeks. This reflects poor staff training, which could easily be remedied by providing some basic Sherry education. Finos should be treated as any other white wines!

There are two basic types of Sherry: those that undergo biological aging and those that undergo oxidative aging. There are also styles that fall in between the two and, in a sense, are hybrids. The first category includes Fino and Manzanilla de Sanlúcar de Barrameda. These wines are pale or straw yellow and have the appearance of white wines. The nose of these wines is distinctive with a fresh, almost briny character, notes of dry herbs, green olives and citrus fruits, with an undertone of acetaldehyde that gives these wines their unique character. In any other wine, this bouquet might be perceived as a fault. Acetaldehyde gives the wine its pungency and is recognized as the “Sherry smell.”

Biological aging occurs because a yeast film or flor develops on the mosto or very young wines of Sherry. The cellar master determines which wines are truly fine or worthy of becoming fino style and the vinification process is based on this initial evaluation. The flor comprises a very different set of yeast cells that form on the surface of the wine, and thereby protect it from oxidation. This white veil of yeasts was first alluded to by Hesiod in the seventh century B.C.E. The yeast, mainly Saccharomyces beticus, consumes any remaining sugars, alcohol and glycerine to survive and hence the wine needs to be both fortified (to 15 percent) and constantly “refreshed” with newer wines to allow the yeast to thrive. This is the reason these Sherries and unsweetened ones can taste so dry. While most commercial finos are aged for the minimum of three years, the most selective ones are aged over six years, at which point the yeast begin to perish. 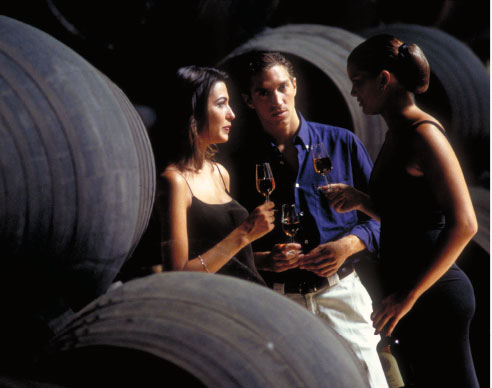 The viability of the yeast is very much dependent on the ambient environment, temperature, humidity, stability, etc. The cathedral-like bodegas, in which the maturation of these wines takes place, are designed to enhance the precise environmental conditions needed for the yeast to develop and thrive. In pre-modern times, the constancy of temperature and humidity was preserved by opening up the louvered windows at the top of the walls of the bodega to allow the effects of either the levante or poniente winds. Today’s modern bodegas may have computerized controls and automatic sensors. The sensitivity of the yeast is also reflected in the Manzanilla, which has an aroma of chamomile and a slight briny character. It is aged in bodegas close to the ocean and even in warehouses on docks, where that particular yeast can thrive.

These wines should be tasted fresh; restaurateurs should be cognizant that this freshness starts to dissipate after it’s been bottled for six months to a year. Some producers have started to indicate bottling dates but, as you can imagine, this is a double-edged sword for them. The greatest crime is in offering a glass to your customer after the wine has been opened for a few days without any preservation. These wines are most unfamiliar to consumers and are best enjoyed with flavorful, slightly spicy foods high in umami, such as aged cheeses, green olives, shrimp in garlic and olive oil, pimiento dishes and other seafood such as grilled octopus. Most intensely flavorful foods will overpower most wines, but Sherry wines can be both enhanced by them and make the foods taste even more delicious. 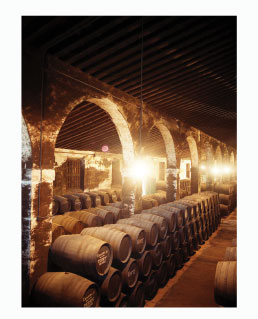 The other type of Sherry is oloroso, which in Spanish means pungent. These wines are selected out as being more conducive to this type of Sherry either through tasting or the lack of development of the flor, and the wines are fortified to 17 percent to prevent any such biological activity. The wines then undergo an aging process in large, 600-liter American oak butts, to allow trace amounts of oxygen interchange through the barrel while water evaporates slowly. This makes the level of dry extract in the wines higher, making them more intense. The wines also undergo a complex blending process called the solera system; it is similar to the finos where younger wines are added to older wines. At the apogee are wines referred to as VOS and VORS, in which the youngest wines in the blend are minimally 20 and 30 years of age respectively. Consumers are more familiar with this style of wine when it is sweetened and marketed as cream Sherry.

Amontillado and Palo Cortado are Sherries that have undergone both the biological and oxidative processes. Typically, Amontillados were dry but more recently have been marketed as medium or off dry. Amontillados are complex and delicious with certain soups such as an old-fashioned consommé; but surprisingly, they pair well not only with aged cheeses but also with asparagus and artichoke dishes, which are notoriously difficult in pairings. Palo Cortado is rare and the biological aging is deliberately halted with added fortification to undergo oxidative aging. With time, the characteristics that were identified in the young fino become more evident with maturation and offer a smooth, round meditation wine with notes of butter, orange and lemon rind.