Michael Cohen of Los Angeles and Cristen Clark of Runnells, Iowa Sweep the Categories at Napa Valley Cook-off on May 17, 2014 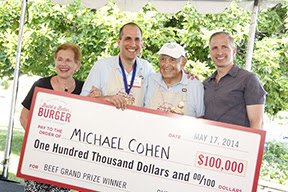 St. Helena, Calif., May 19, 2014 – As the official BBQ and grilling season kicks off, Sutter Home Family Vineyards today announced that Michael Cohen from Los Angeles won the $100,000 grand prize of this year’s Sutter Home Build a Better Burger Recipe Contest with the Chipotle Bacon Maple Jam Burger, edging out his returning finalist father Harold Cohen from Hollywood, Florida who prepared crowd-pleasing Mexicali Burgers. This was the first year in the double decade contest where a father and son competed against each other.  Michael’s Chipotle Bacon Maple Jam Burger was also named as the $2,500 People’s Choice Award Beef Burger by cook-off attendees.

Michael Cohen, a composer, won the judges over with the flavorful spicy burger topped with creamy blue cheese, bacon maple jam, pear, spinach, and hazelnut salad during the cook-off at Sutter Home Winery in St. Helena, Calif. on a beautiful wine country Saturday.

Head judge James McNair noted after sampling the burger during judging, “This burger is perfect – I wouldn’t change a thing.” Erin Evenson, Build a Better Burger judge and last year’s $100,000 winner, added, “Blue cheese and bacon – I now understand what the fuss is about.”

The panel of judges also named the Sour Apple Pork Burger from Cristen C. Clark of Runnells, Iowa as the Best Alternative Burger and $15,000 prize winner. The audience agreed again, awarding the $2,500 People’s Choice Award to Cristen for the alternative category. James McNair exclaimed when trying the burger, “I have only had one bite but I am in Hog Heaven!”

“It was fun competing with my Dad,” noted Michael Cohen, “I learned my love of food from him.”  When asked how he was going to spend the $100,000 prize, Cohen (a composer) answered, “I’m going to start by buying a nice shiny new guitar!”

Alternative winner Cristen Clark, baker and blogger for FoodandSwine.com, credited her cooking talents to her mother and grandmother “growing up in a mid-west kitchen,” commenting, “I am extremely humbled and thankful.”

“Congratulations to both Michael and Cristen – Sutter Home wine and burgers on the grill are the classic all-American summer experience, and both are best shared with friends and family,” said Wendy Nyberg, vice president of marketing for Sutter Home.

The Sutter Home Build a Better Burger Recipe Contest winners were selected by this year’s panel of judges, including:

For more than 20 years, the Sutter Home Build a Better Burger Recipe Contest has invited cooks from around the country to submit their original creative, flavorful burger recipes for a chance to win. The 2014 recipe contest is now open for submissions. Recipes can be entered at www.sutterhome.com or the Sutter Home Facebook page.

Over the last two decades, the popular recipe contest has collected thousands of mouth-watering burger recipes, allowing Sutter Home to create the BurgerBase®, the world’s largest collection of burger recipes. The BurgerBase® also serves as inspiration for contestants, as judges look for original and inspired recipes that are packed with flavor.

Sutter Home would like to thank the sponsors of the Sutter Home Build a Better Burger Recipe Contest:

About King’s Hawaiian
KING’S HAWAIIAN® Founded more than 60 years ago in Hilo, Hawaii, by Robert R. Taira, King’s Hawaiian is a family-owned business that for three generations has been dedicated to making irresistible, original recipe Hawaiian foods made with Aloha Spirit. A priority for the company is sharing the Hawaiian Way—a uniquely Hawaiian approach to hospitality based on graciousness, generosity, and a commitment to making everyone feel a part of the KING’S HAWAIIAN ohana—our extended family.

About Weber-Stephen Products LLC
Headquartered in Palatine, Ill., and the world’s premier manufacturer of charcoal, gas and electric grills, grilling accessories and other outdoor room products. In 1952, founder George Stephen sparked a backyard revolution with his invention of the Weber®kettle. More than 60 years later, the privately-held company remains the industry leader with its Weber®, Weber® Q®, and Weber accessories. As a leading exporter of grills, Weber brand products are sold worldwide at select home centers, hardware stores, department stores, patio stores, and other retail outlets. For more information, visitwww.weber.com.

About KitchenAid
Since the introduction of its legendary stand mixer in 1919 and first dishwasher in 1949, KitchenAid has built on the legacy of these icons to create a complete line of products designed for cooks. Today, the KitchenAid brand offers virtually every essential for the well-equipped kitchen with a collection that includes everything from countertop appliances to cookware, ranges to refrigerators, and whisks to wine cellars. Cook for the Cure®, the brand’s partnership with Susan G. Komen®, is now in its 13th year and has raised over $9.5 million to help find a cure for breast cancer. To learn why chefs choose KitchenAid for their homes more than any other brand*, visit KitchenAid.com or join us at Facebook.com/KitchenAidand Twitter.com/KitchenAidUSA.

About Sutter Home
When the Trinchero family bought the Sutter Home Winery in 1948, they had a vision, a passion, and an insight into consumer tastes. In the early 1970s, Sutter Home started a trend when the company created White Zinfandel, introducing a new, sweeter flavor profile and changed the way Americans enjoyed wine by offering high-quality varietals at an affordable price. By the 1980s and 1990s, Sutter Home became a household name and the second largest independent family-run winery in the United States. With a fresh new label in 2013, Sutter Home continues to reflect the evolution of the brand and its consumers with 20 different varietals to choose from. For more information visit www.SutterHome.com