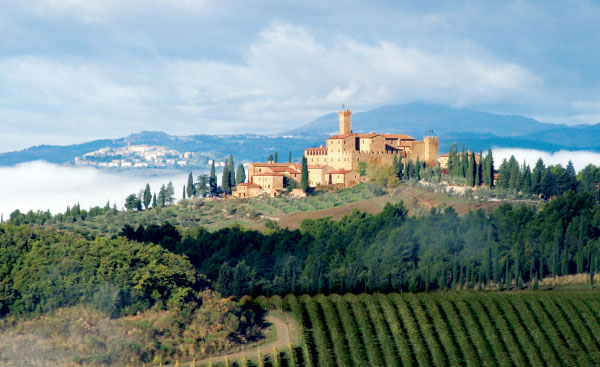 While there is no doubt that several historical personalities have played a key role in the evolution of Brunello di Montalcino’s worldwide reputation, arguably none has been as significant as John Mariani, though his modesty would preclude such affirmation. John Mariani, a tall, lanky, distinguished-looking American, can be credited with helping to transform a relatively unknown region in Tuscany, named for a sleepy and somewhat rundown hilltop medieval fortress town of Montalcino, into one synonymous with the highest quality wines of Italy.

He and his brother, Harry, were responsible for developing an export market for Italian wines in the United States and 85 other countries. With Banfi Vintners, their import company named after their grandaunt, Teodolinda Banfi, they developed a world-renowned private company with a wide portfolio of wines, known for its pursuit of excellence. John’s genius was an understanding of the U.S. market and satisfying it, not only with a portfolio that included Bordeaux’s premier grand crus, such as Chateau Latour and Lafite-Rothschild, but also in developing popular brands such as Riunite, a leading U.S. import for over 27 years. In the late 1980s, Mariani’s expertise in understanding the market resulted in Montalcino’s emerging as the exclusive importer of Concha y Toro, one of the top three imported brands of today. It was the success of Riunite that enabled the Marianis to fulfill an “impossible dream” of establishing their Castello Banfi winery in Montalcino, Tuscany – the focus of this article.

Montalcino’s history has ancient roots but this beautiful hilltop town still reflects its medieval glory, from when it was allied with Siena in a war against Florence in the mid-16th century. While the red wine of the region was known, the most renowned in that era was the Moscadello (Muscat-based) wine, whose modern interpretation is Banfi’s FloruS, a deliciously sweet but complex wine. 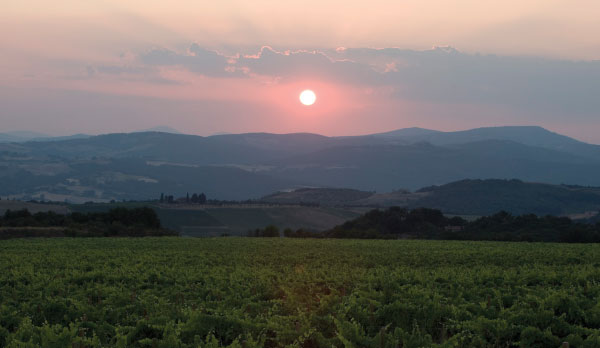 The History of Brunello

The term “Brunello” is a diminutive form referring to the brownish color of red grapes, and was first mentioned in the 14th century. It was not until the 1850s, when Clemente Santi experimented with specific local clones, that the wine gained some national recognition. His grandson, Ferruccio Biondi-Santi, experimented with yields and extended maceration to create the first internationally recognized great wine of Montalcino – the legendary vintage of 1888, of which there are still a few remaining bottles. The Brunello variety was, by this time, identified as a clone of Sangiovese. By the 1960s, there were only 11 producers; yet the region was the first to achieve DOCG rating in 1968 with a requirement that the wines be produced from 100 percent Sangiovese. 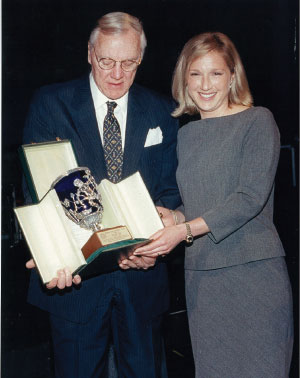 The Marianis brought a scientific approach to their search for locating a winery in Italy, hiring top viticultural and oenological advisors including Ezio Rivella. Rivella oversaw Castello Banfi’s wine production for the next few decades, and just recently retired. They ended up purchasing 7,100 contiguous acres in the southern reaches of Montalcino from 1978 through 1984, in four different acquisitions. John Mariani and Ezio instituted a number of revolutionary developments, many of which initially drew disdain from the local Tuscans. Due to investment in research through partnering with the University of Milan, Banfi identified 29 distinct soil types, and then narrowed those down to a selection of the 15 most suitable clones from over 600 variations of Sangiovese. This led them to better understand which clones to plant where and in what percentages. By establishing a constellation of single vineyards, which Banfi vinifies separately, they have the benefit of selecting to release only optimal wines. Banfi can release as either a single vineyard estate wine, such as the inimitable

Poggio all’Oro Riserva or the magnificent cru Poggio alle Mura, or blend into their Castello Banfi Brunello di Montalcino, or re-classify into a Rosso di Montalcino. The ongoing results of the different clones continue to be investigated, as Banfi is not one to rest on its laurels, and percentages of clones change when replanting is in order. Additionally, despite the cost of research, all of this information has been registered with the EU and shared with the winery’s neighbors, to better the reputation of the name of Brunello di Montalcino.

The other major revolutionary endeavor was to plant international varietals in this region including Syrah, Cabernet Sauvignon, Merlot, Sauvignon Blanc, Chardonnay and Pinot Grigio. These wines are sold under the DOC Sant’Antimo appellation, a designation created by the Consorzio of Montalcino, to include Montalcino wines that were not made from Brunello or Moscadello. That is not to say that the wines are inferior, as anyone who has tasted them can attest. These include the superb SummuS (Sangiovese blended with Cabernet Sauvignon and Syrah), the Cum Laude (a blend of Sangiovese, Cabernet Sauvignon, Syrah and Merlot), BelnerO (almost all Sangiovese but a touch of Cabernet Sauvignon), Tavernelle (100 percent Cabernet Sauvignon), and Fontanelle (100 percent Chardonnay). Furthermore, there are regional wines from the Banfi label that are IGT Toscana-designated, such as ExcelsuS, Le Rime, Col-di-Sasso, Centine and San Angelo – all great value wines. 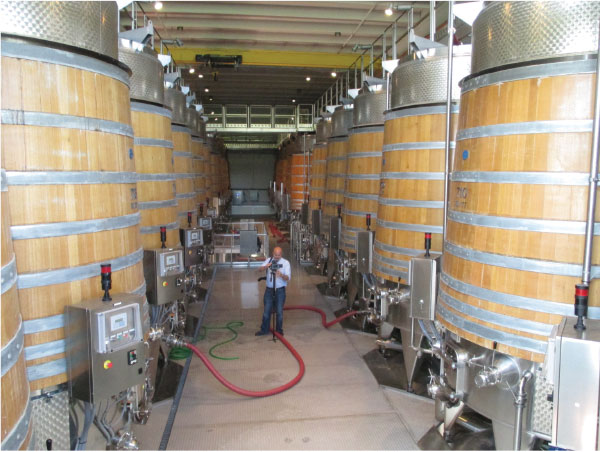 The unique hybrid open top fermenters used in the Horizon program at the Castello Banfi Winery.

The scientific basis extends to the winemaking, including in the relatively recent 2007 Horizon program, which is the estate winery within the winery. The facility houses 24 impressive, uniquely designed, open-top hybrid fermenting tanks constructed from both oak and stainless steel, allowing for control, hygiene and oak influence in producing the Brunello-based wines. On my last visit in June, I saw further developments, including tangential filtration and electrodialysis, which are expensive investments. The former is used to maintain the integrity of color and flavor of the wine, and the latter is in lieu of cold stabilization treatments. These advancements are far more energy and time efficient, resulting in wines that are less manipulated and contain lower sulfite and histamine levels, while retaining flavors and structure. 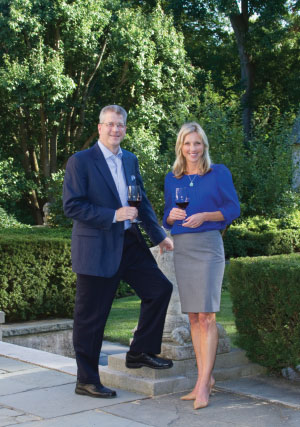 But why is Brunello di Montalcino so special? Those who have not tasted these wines are missing one of the great Italian wine experiences. The wines have greater depth and structure than most Chianti Classico Riserva wines, even though the two have similarities. The haunting floral, violet, licorice, spice, tobacco and leathery undertones, as well as the cherry flavors wrapped in structured tannins, allow the wines to be paired with flavorful foods and to last for years.

The vision of John Mariani extended to wine tourism, resulting in the full restoration and modernization of the Castello Banfi, the original 11th-century castle and its neighboring buildings. There is a full-service enoteca-come-winebar, glass museum tracing the ancient relationship between glass and wine for millennia, informal lunches and more formal dinners at La Taverna,  and luxury rooms and suites at Castello Banfi – Il Borgo. The sleepy town of Montalcino has gone from one of the poorest to one of the wealthiest in Italy, with over a million wine tourists visiting per year.

John Mariani’s impact is clear: There are currently over 220 producers in Montalcino, and land planted with vines that were valued at €15,000 per hectare in 1967, are valued today at over €600,000. His Tuscan neighbors have now come to appreciate this American and his family, and value all he has done to help the region become what it is. They also appreciate the torch being handed down to a third generation of Marianis — his daughter, Cristina Mariani-May, and her cousin, James Mariani. Cristina and James are co-CEOs, who in turn have come to regard highly some of those timeless principles of the pursuit of excellence and family values, which their neighbors also respect.