Once upon a time in America, cider was king. Early settlers brought with them seeds for cider apple trees, which evolved over time into unique species now considered native to North America, while Johnny Appleseed famously roamed the land planting trees not for food fruit, but cider apples. In fact, so popular was cider that orchardist Tom Burford estimates that Americans drank as much cider per capita in the 18th century as they do sodas today, with even children drinking cider at breakfast.

What eventually killed cider was Prohibition, which prompted farmers to replace their cider orchards with trees that would produce sweeter, less acidic food apples. By the time repeal arrived, America was thirsty and, where cider apple trees would take years to grow back, beer was immediately available. Cider didn’t stand a chance.

That is, until lately. Over the past several years, cider has seen double and sometimes triple digit growth, with enduring labels like Strongbow and Woodchuck experiencing renewed interest and newer brands like Crispin, Angry Orchard and Original Sin surging towards the top of the market. While cider still represents but a tiny fraction of the beer market, that segment is growing at a torrid pace.

Of course, those with longer-than-average beverage memories will surely recall this refrain. Cider’s first comeback was in the mid- to late-1990s, but had faded by the turn of the century. The excitement returned around 2006, but again cider faltered. So what’s different now? 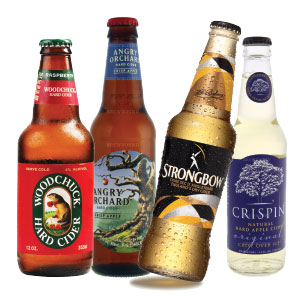 Several things, in fact. To begin with, cider is this time catching the wave of craft beer’s seemingly unstoppable momentum and benefitting from the drinking habits of youthful Millennials, who studies have shown like to experiment with new beverage styles and flavors. Couple that with the broad gluten-reduction trend of current times – cider is and always has been gluten free – and you have a market more amenable to the cider experience than it has been for nigh on a century.

All of which raises the issue of what actually makes up a cider.

Known in parts of the U.S. as “hard cider,” to differentiate it from the fresh-pressed apple juice sold at roadside stands, at its most basic cider is simply fermented apple juice, much as wine is fermented grape juice. Some companies, usually larger ones, are prone to using concentrates that are reconstituted, fermented and usually sweetened; and while it can be served still or only slightly fizzy, cider in the U.S. is typically carbonated to a level near to that of draft lager.

Because North Americans tend to prefer more sugary drinks, cider on this side of the Atlantic tends towards the sweet side of the flavor spectrum. It often includes added sweeteners, although it can get quite dry in cider-producing countries like Spain and the U.K. Just as craft beer drinkers have evolved in their tastes towards bitter pale ales and IPAs, it’s a safe bet that as cider drinking becomes more commonplace, consumers will eventually demand drier and more structurally complex ciders.

In fact, signs of that progression are already appearing, with companies as diverse as the small market Colorado Cider Company and older Farnum Hill Cider having as part of their portfolios ciders of significant dryness. America’s passion for pushing the envelope has led to flavorings well beyond the occasional pear or berry accented cider, all the way to dry-hopping in the fashion of craft-brewed pale ale, aging in bourbon barrels and other previously-used oak, and the addition of all manner of extraneous flavorings, from ginger to pumpkin to mead.

Still, beyond curious Millennials and gluten-free trends and unusual flavorings, what is most likely to guarantee cider’s long-term success this time out of the gate is its largely gender-neutral appeal. For while confectionary vodka might be as female in orientation as IPA is male, cider can count equal numbers of men and women among its enthusiasts, and that is a claim attributable to very few, if any, categories of alcoholic beverages.