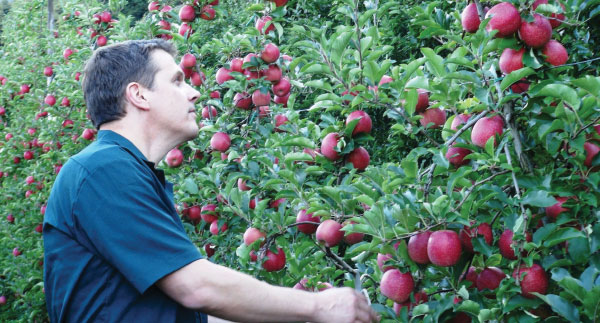 David studied fermentation science at UC Davis and has experience brewing beer as well as making wine. He joined The Boston Beer Company more than 15 years ago and began working on cider recipes. David has traveled the world looking for the best apples to ferment cider, experimenting with different cider recipes and learning how to make the best cider possible for Angry Orchard. He has taken a little time to talk with us here at in the Mix about their incredibly popular cider.

ITM: David, thanks for talking with us. It’s fun to watch an exploding category take hold. Cider has been around forever, and has always been popular in the pubs of Europe, and in New England in the U.S. Why do you think people all over the country are embracing it now? Is it marketing, timing or that it just plain tastes good?

DS: Mike, thanks for having me and diving into hard cider, which is exploding in popularity right now. Cider was actually the beverage of choice during Colonial times, died during Prohibition and not until recently, has it been rediscovered by drinkers looking for something refreshing and different that’s not beer or wine. Angry Orchard has steadily remained the number one cider in the market; we think it’s because the distinct and complex flavor profiles of Angry Orchard appeal to the adventurous and sophisticated beer-lovers who are looking to drink something different, along with wine drinkers who are looking for an alternative beverage. At the same time, Angry Orchard offers drinkability and refreshment for any drinker as well as an opportunity for experimentation. Through samplings on premise, we drive trial and education with drinkers so that someday, drinkers will be as knowledgeable and passionate about cider as beer drinkers are about craft beer.

ITM: You’ve tinkered with apple fermentation recipes all over the world. When Boston Beer first entered the tiny category with HardCore Cider in the ‘90s, you worked closely with legendary European cider maker Alan Tringham. How did he influence you?

DS: For a little more than 15 years, I’ve been fortunate to travel the world looking for the best apples and experimenting with apple blends, different yeasts, interesting ingredients and aging techniques. Since we launched HardCore, we have experimented with too many recipes to count, but that process helped us learn what different apples, yeast and aging techniques contributed. Ultimately, that experience helped to create the Angry Orchard cider recipes we’ve introduced. As you know, we also worked closely with a European cider expert, Alan Tringham, who had decades of experience making ciders. Much of what we know about European orchards and cider making, we learned from him. Unfortunately, Alan passed away last year, but we continue to use many of the techniques we learned from him.

ITM: Let’s talk about the apples you use. I understand you use European varieties. I was under the impression cider makers used crabapples.

DS: You are not far from the truth! Crabapples were used during the Colonial era to make hard cider and are distantly related to the French bittersweet apples we use in our Angry Orchard ciders. In Normandy and Bretagne, France, farmers have been growing cider apples specific to cider making for hundreds of years. Unlike ordinary apples, these bittersweet apples impart certain tannins, acidity and flavors lending body, mouth-feel and complexity to the cider. We also use culinary apples from Alto Adige (also known as Sudtirol) in northern Italy, an area well known for wine production. We found that the flavor profile of the culinary apples, much like wine grapes, reflects terroir of the region. Blending the French bittersweet apples with the Italian culinary apples creates an overall balance of tannins, acidity and juicy apple sweetness unique to Angry Orchard hard ciders like Crisp Apple, Traditional Dry, Apple Ginger and our Cider House Collection.

There are certain regions within the United States, such as the Pacific Northwest, that share characteristics – rich soil, ample sunshine, long days and cool nights – with the areas of France and Italy that grow apples for Angry Orchard. We found that the fruit forward, less tannic and mildly acidic character of apples from Washington State, coupled with our yeast and fermentation process, created the perfect balance of aroma, flavor and body we were looking for in our newest Green Apple cider. 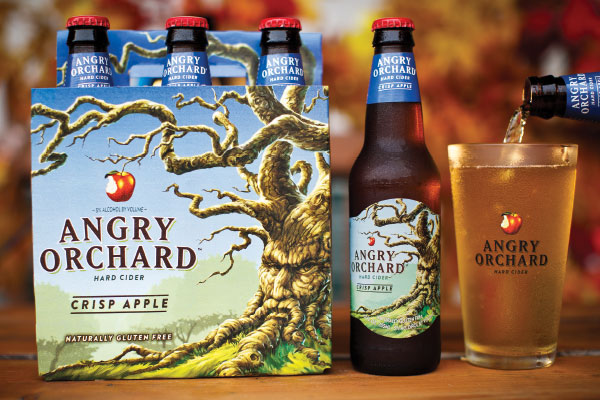 ITM: Is Crisp Apple the most popular of the types you produce?

DS: Shortly after we introduced Angry Orchard two years ago, Crisp Apple became the most popular cider among drinkers and Angry Orchard has become the number one cider in the U.S., which is pretty exciting. Not only are we seeing Crisp Apple enjoyed on its own but also – similar to the craft beer movement – we’re seeing drinkers experiment with hard cider. We see drinkers using Crisp Apple for cooking, baking, grilling and even as a unique mixing ingredient in cocktails, which is pretty cool.

ITM: The Cider House Collection is interesting. I tried almost all of them – yummy with a kick, up to 10 percent ABV. You get to try some different techniques with these, including some wood aging. Are these your “super ciders”?

House Collection ciders are similar to wines in that we use a blend of apple varietals selected to create a particular balance of tannins, acidity and sugars. We ferment the juice with a white wine yeast chosen specifically for its neutral character, to showcase the apples’ complex and extraordinary flavors.

We just released a new year-round Cider House Collection specialty cider, The Muse, which is hitting shelves now. The Muse is an effervescent, fruit-forward cider inspired by the festive nature of slightly sweet demi-sec Champagnes and sparkling wines. It has a distinct juicy apple aroma with top-notes of honey, vanilla and oak. The Muse is slightly sweet upfront, balanced by a clean bright acidity, off-dry finish and a lingering flavor of sweet, fresh apples – perfect as a an alternative to white wine.

In addition to The Muse, the Cider House Collection features Angry Orchard Iceman, inspired by traditional Quebec ice ciders; and Angry Orchard Strawman, an American take on a French farmhouse cider. Strawman was influenced by centuries-old European farmhouse cider-making techniques and pairs perfectly with a variety of cheeses and charcuterie, while Iceman took cues from the traditional ice ciders of Quebec, creating a cider that is both delicate and sweet and a perfect pairing for desserts.

ITM: Angry Orchard cocktails are really good. I had an Angry Balls™ the other day, made with Fireball Cinnamon Whisky. It was delicious. Wouldn’t this be an avenue that operators could explore more?

DS: Angry Orchard cocktails are really fun to create and hard cider is an unexpected and versatile mixology ingredient. We’ve actually been working with a beer sommelier and mixologist, Hayley Jensen of New York City’s Taproom 307, who has crafted cocktails for all seasons using Angry Orchard as a key and innovative ingredient. As a cocktail ingredient it pairs well with warming spirits, like Bourbon, for the winter and lighter liquors, like Gin, for the summer. Many of her cocktails can be found on our website, www.angryorchard.com, and frequently, we find drinkers sharing their own cocktail recipes over social media.

ITM: Ciders are big business to the on-premise market. Do you foresee cider bars having a bigger presence in the next few years?

DS: With the popularity of Angry Orchard and the hard cider industry, we are seeing more and more attention from retailers, bartenders and drinkers alike, for hard cider. Compared to the beer category, hard cider is a very small but growing segment – it’s about 0.7 percent of the beer market right now. Since our national launch about two years ago, Angry Orchard now comprises over 50 percent of the cider market (according to IRI) and has driven almost all the category growth. The segment is still so small, however, that there’s so much opportunity to educate people about cider – what it is, how it’s made, different styles and flavor profiles. Through samplings on- and off-premise, we hope to drive trial and education with drinkers so that someday, drinkers will be as knowledgeable about cider as beer drinkers are about craft beer. Because this is a relatively new beverage to most drinkers and small segment of the beer market, it is likely drinkers will start catching on and on-premise locations will increase their hard cider choices. It’s really a great time to be a cider maker!

ITM: Cider seems to have a gender-neutral consumer base, almost 50/50 male to female drinkers. This is good for you. Care to comment on that?

DS: Since we first introduced Angry Orchard, we found that it appealed to both men and women. We also see drinkers in their mid-twenties to thirties who have increasingly sophisticated palates and are eager to explore new beverages. They are trying Angry Orchard, really enjoying it and sharing their Angry Orchard experiences via social media. Ciders have generally been more closely associated with beer in terms of drinking occasions, how they’re served, and at around 5 percent ABV, Angry Orchard hard ciders have a similar ABV to beer. But unlike beer, cider is made from fermented apple juice, is generally less carbonated than beer, and in the case of Angry Orchard, fermented with a wine yeast. So, we think that Angry Orchard appeals to beer and wine drinkers looking for a refreshing alternative and a beverage made with quality ingredients. And, because it’s made from fermented apples, it also appeals to people on a gluten-free diet looking for a delicious gluten-free beverage.

ITM: According to QuestMetrics, cider grew volumes about 49 percent for the full year (2013) compared to 2012. Incredible. Where do you feel your on-premise growth will come from in the next year?

DS: Angry Orchard’s core cider styles are found on- and off-premise in bottles with only Crisp Apple available on draft. We look for opportunities to sample drinkers to drive trial and help educate them about cider in general. As drinkers start appreciating cider as a flavorful alternative to beer and wine, we’re seeing more opportunity to introduce Angry Orchard Crisp Apple draft lines on-premise. Hard cider still pales in comparison in terms of shelf space to the beer category, but we’re seeing bars that have ten or more handles realizing that they need one cider among those ten taps. According to GuestMetrics on-premise data, the Angry Orchard brand family was the number one brand in growth in total sales (as measured by incremental cases and dollars) in 2013 as measured by increase in Q4.

ITM: Lastly, what cider do you offer in kegs?

DS: Right now, Angry Orchard Crisp Apple is the only cider style we keg. It is available at bars and restaurants nationwide as well as in limited quantities off-premise, although we hear more and more that drinkers want to swap Angry Orchard into their at-home craft beer kegerators, which is pretty amazing.