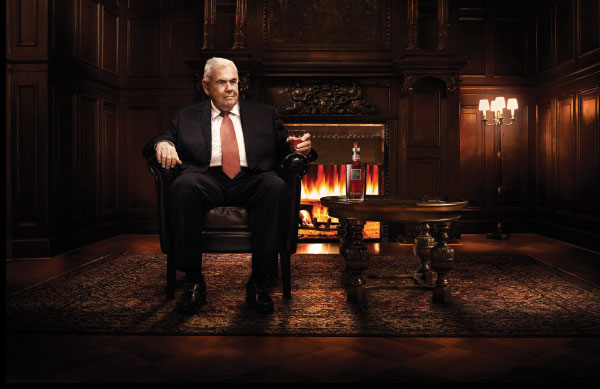 Don Pancho Origenes is produced by the legendary Cuban master Rum distiller, Francisco “Don Pancho” Fernandez, who is globally recognized as one of the most experienced and respected master blenders in the world. Don Pancho was instrumental in modernizing Cuba’s Rum industry in the 1970s. After Cuba’s national brand, Havana Club, was acquired, Don Pancho relocated to Panama where, in the 1990s, he discovered a neglected distillery in the Herrera region of Panama. There he rebuilt the Las Cabras Distillery, today one of the most important and revered in the world. Don Pancho age dates his Rums with the youngest barrels, delivering true 8-, 18- and 30-year-old Rums. The 18-year is an exceptionally smooth Rum with a gratifying finish that confirms the long years of aging in American oak barrels. Don Pancho Rums are imported by Terlato Wines International. 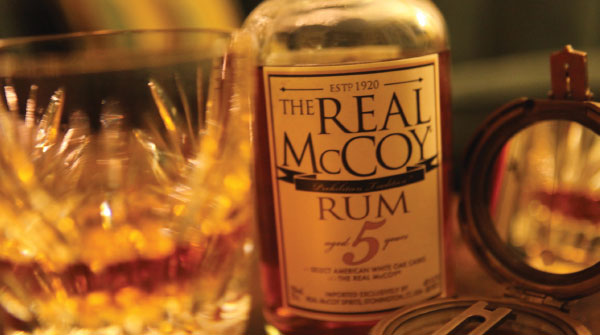 This Rum is based on the story of Bill McCoy, the pioneer rumrunner of the Prohibition era. McCoy was the ﬁrst person, in January of 1920, to ﬁll a boat full of Rum down in the Caribbean and sail it up to New York, anchoring three miles offshore and acting as a ﬂoating liquor store.

McCoy never adulterated or manipulated the alcohol, as many did in those days, and that’s why his product was known as “The Real McCoy.”

Filmmaker Bailey Pryor came up with the idea of making The Real McCoy Rum while producing a documentary ﬁlm about Bill McCoy for PBS (the ﬁlm ended up winning five Emmy Awards in 2013). His research for the ﬁlm led him to the identity of the original distillery in Barbados, Foursquare Distillery. Here he met Richard Seale, the fourth generation master distiller at Foursquare. Richard and Bailey developed an authentic Rum containing only natural products, based on the old recipe. The Rum has now won over 24 awards worldwide including Double Gold at the San Francisco World Spirits Competition in 2014. 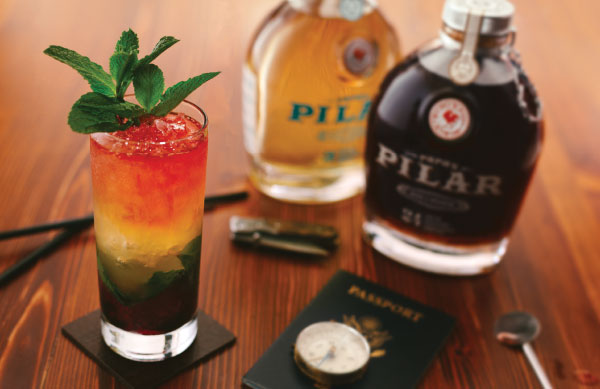 Following a sold-out launch in Florida, the brand is now also available in California, Maryland, Massachusetts, Michigan, New Jersey, Rhode Island, Tennessee, Texas and Washington, D.C. The inaugural Dark and Blonde varieties are born from the finest Rums of the Caribbean, Central America and the U.S.A. Once the Rums are brought to the U.S.A., the Papa’s Pilar team of master blenders artfully marry the Rums in a unique solera-aging and blending process, using American oak Bourbon barrels, Port Wine casks, and finishing in Spanish Sherry casks.

Every aspect of Papa’s Pilar is thoughtful and purposeful. The distinct bottle evokes Papa’s exploits through a form reminiscent of an iconic World War II canteen. The etched compass closure reflects that same sense of adventure on either land or sea, and the chain link makes it practical for any excursion. The lion heads represent nobility while the rooster on the medallion pays homage to Key West, an island where Hemingway and his boat Pilar once resided, and where their legacies remain celebrated fixtures within the community. 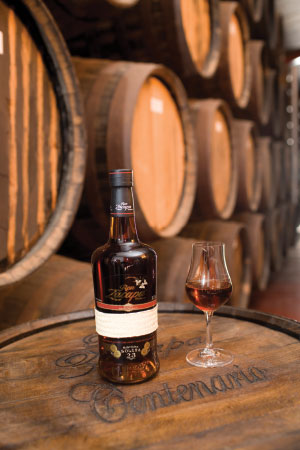 It all began in a town called Zacapa in eastern Guatemala, which is 751 feet above sea level. From there, things go up. The cane is grown at 1,148 feet, where the virgin sugar cane honey is produced. Different from molasses, it is the concentrated first press of sugar cane. Then the honey is fermented, using the distillery’s own yeast strain.

The maturation takes place at 7,544 feet above sea level at The House Above the Clouds. The mountains’ cool temperatures slow the aging process while the thinner air and lower atmospheric pressure help intensify the infusion of flavors from the barrels. Here, Zacapa’s unique “Sistema Solera” is used, which is the real secret to the Rum’s balance and complexity. Based on a Spanish tradition developed over 500 years ago to age Sherry, the Sistema Solera involves blending Rums of various ages in casks that once held robust American Whiskey, delicate Sherry and fine Pedro Ximenez wines. Every drop of every Rum passes through each type of cask, allowing each one to share its aromas and flavors with the maturing liquid. The result is a remarkable Rum of exceptional quality. Zacapa Rum is handled by DIAGEO. 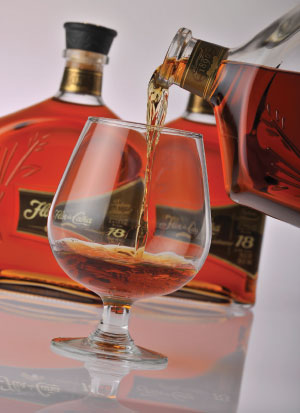 Flor de Caña dates back to 1890 at the San Antonio Sugar Mill in Chichigalpa, Nicaragua. The traditions and the heritage of the company have remained unchanged over the decades. Today the fifth generation of the Pellas family continues to guide the Compañia Licorera de Nicaragua with their commitment to expert craftsmanship, the finest natural ingredients and the unique slow-aging process that sets Flor de Caña Rums apart. The Centenario bottlings’ range is 25, 18 and 12 years old. Flor de Caña acquires its amber color, rich flavor, smooth taste and unique aroma in small, American white oak barrels. There are no additives or accelerants used to promote aging artificially. Traditional barrelhouses, built without air conditioning, provide Flor de Caña with a natural, undisturbed environment in which the full flavor can unfold. Every drop of Flor de Caña Rum is naturally aged. Flor de Caña is now available through William Grant & Sons. 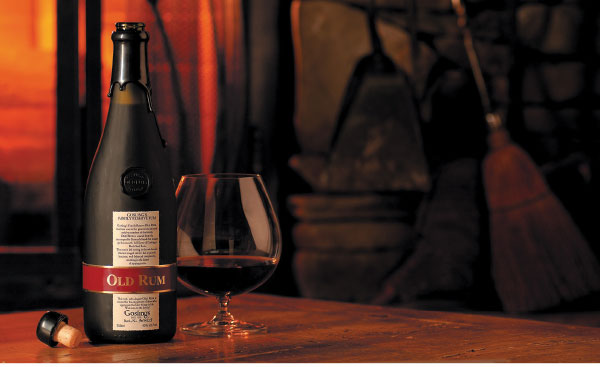 In 1806, with a ship full of spirits bound for America, Englishman James Gosling ran out of wind and time. His vessel, the Mercury, had an expired ship charter and Gosling determined to put in at the nearest landfall, which was the island of Bermuda. Knowing a good thing when he saw one, he decided to make the best of an uncertain situation. James opened a shop on the King’s Parade, St. George, in December 1806, and the Gosling family has been in Bermuda ever since. Today, Gosling Brothers is Bermuda’s oldest business and their Gosling’s Black Seal® Rum is Bermuda’s number one export.

Gosling’s Family Reserve Old Rum is hand-labeled, numbered, sealed and packed in wood. This is a Rum like no other – it has all the character and elegance of an old, rare cognac. After many years in once-used charred oak Bourbon barrels, it is stately and sophisticated in keeping with its noble heritage. Gosling’s Rums are handled by Castle Brands Inc. 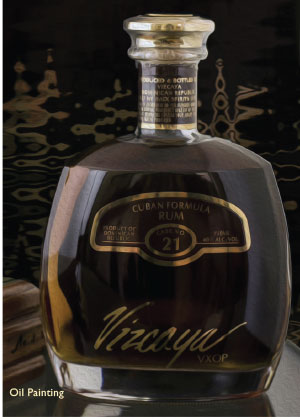 Vizcaya VXOP Rum is crafted using time-honored, traditional methods that date back to 19th-century Cuba. Since the climate and terroir of the Caribbean are uniquely suited to producing superior sugar cane crops, this area has a proud heritage of Rum distillation.

Made in the Dominican Republic, Vizcaya VXOP starts with sugar cane harvested at the peak of freshness, then quickly pressed to collect its fragrant juice. The juice is fermented and distilled in small batches before being aged in selected oak barrels that formerly held Bourbon. This process, known as “methode agricole,” is the unique distilling method that infuses Vizcaya VXOP Rum with its exquisite bouquet, smoothness and delicately refined taste. When you see the rich, golden color of Vizcaya and allow its complex flavors to fill your senses, you’ll understand why the master Rum maker holds each stage of the process to the highest possible standards. Vizcaya products are carried by A. Hardy USA. 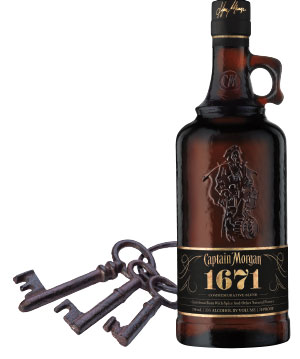 In 1671, Captain Henry Morgan set his sights on Panama City, the richest city in the Western Hemisphere. Amidst his raid and ultimate capture of Fort San Lorenzo, Morgan lost five ships, including his famed flagship, The Satisfaction. What will forever stand as a historic battle in Panamanian history now serves as inspiration for the Captain Morgan Rum Co.’s newest offering – the limited edition CAPTAIN MORGAN® 1671 Commemorative Blend Spiced Rum.

CAPTAIN MORGAN® 1671 is instilled with a unique blend of spices that provide a luxurious, full-bodied flavor. The distinct spices create a taste of chocolate and dark fruits with hints of vanilla. Finished in Spanish oak, the commemorative blend contains palatable elements derived from the type of barrels that were believed to have been onboard The Satisfaction. 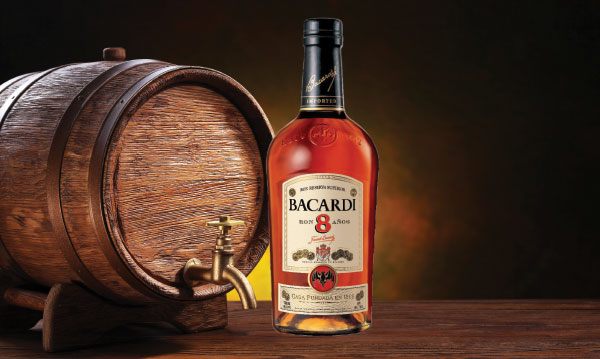 Created in1862, this reserve blend was created for special occasions and has remained the same for seven generations. It is aged for a minimum age of eight years in hand-selected oak barrels. The well-balanced aroma of caramel and oak entices one to enjoy the Rum neat or on the rocks, but when served in a cocktail, will enhance the flavor and body of it to make it exceptional.

“According to folklore in Don Facundo’s native Spain and new home of Cuba, bats symbolized good health, fortune and family unity. So when his wife, Doña Amalia, noticed a colony of fruit bats hanging from the distillery’s rafters, she interpreted this as a powerful sign and had the idea to use the bat as a symbol for the Bacardi Company and its BACARDÍ Rum.”