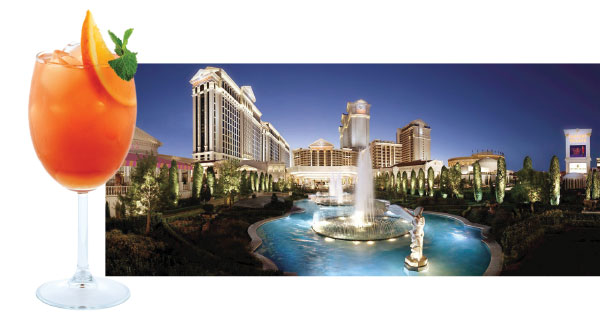 George found himself relaxing poolside at the beautiful Caesars Palace pool in Las Vegas, enjoying a gorgeous sunny afternoon and in desperate need of refreshment. He quickly spotted a cocktail server carrying a tray with several bright red colored drinks in large plastic glasses, garnished with assorted fruit slices. Those look awfully inviting, he thought. He quickly got the server’s attention after she delivered her order, and asked, “What were those wonderful looking beverages you just served those young ladies?”

“Those were our Planter’s Punch. They are really yummy but they do pack a wallop,” she replied.

The server returned shortly with his order, handed the Planter’s Punch over and waited for him to take a sip. “So, what do you think?” she inquired.

“That is delicious, very stimulating; you can really feel the rum,” George answered.

“It’s made with Myers’s Jamaican rum, pineapple, orange and lime juices. I’m so glad you like it,” the cocktail server added.

George ordered a second and slipped into the pool to cool off, enjoying the nice warm glow the first Planter’s Punch provided. As the afternoon wore on and the hot desert sun worked its magic, he realized

hat it was time to retire to the room for a quick nap before cocktail hour and dinner. He located his friendly server and requested the check.

“Yes,” George said. “Taking a quick nap before Raos tonight sounds like my best bet, but I had a lovely day and the drinks were fantastic!”

The server replied, “If you really like Planter’s Punch, you should check out one of my favorite spots, Frankie’s Tiki Room.”

George sighed, “Well, so much for a nap.”

Going up to his room, George had a quick shower, changed into his best Hawaiian shirt and headed downstairs to grab a cab. “Frankie’s Tiki Room, please,” George requested. 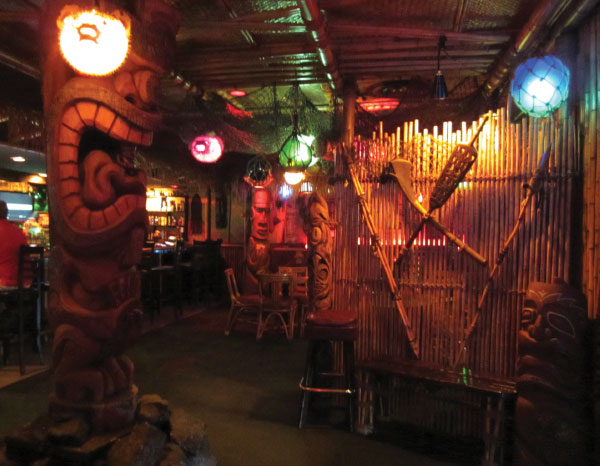 George knew he was in the right place the minute he walked through the door. He grabbed a barstool and perused the menu, which housed a large selection of exotic tropical-inspired libations.

“What can I get for you?” the bartender inquired.

“Very good choice,” the bartender replied. He quickly returned with the telltale bright orange tipple in a large, double Old Fashioned glass, adorned with a peel of orange and a cherry. “So are you a big fan of Tiki?” The bartender asked.

“I think I just became one,” George grinned.

The bartender quickly replied, “Well, next time you’re in San Francisco, you really need to check out a joint called Smuggler’s Cove. If Frankie’s hasn’t completely ‘Tikafied’ you, then Smuggler’s will finish the job!”

“Well, as luck would have it, I’ll be in San Francisco on Friday. I’ll definitely check it out,” George excitedly responded. This trip to Frankie’s was proving to be more and more beneficial as time went on. George thanked the bartender for his warm hospitality, paid his check and had a cab called. Dinner time was approaching at Raos and George was positively famished.

Later that week, after arriving in San Francisco and checking into the Sir Francis Drake Hotel, George hailed the first cab he saw and was on his way to Smuggler’s Cove. 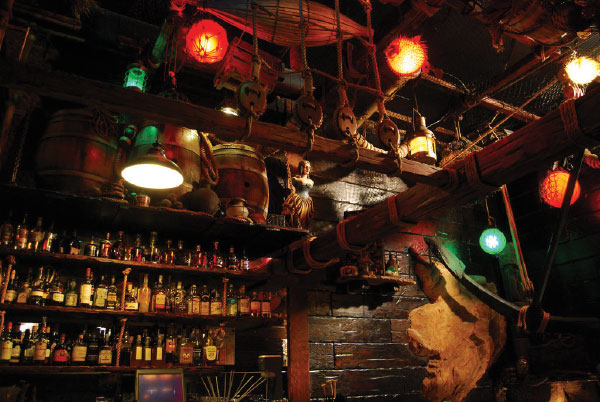 Walking into the bar, he was immediately transported to some remote island in the South Pacific. He quickly understood the origin behind the bar’s name when he took a tour of the downstairs. Returning to the main floor, he secured a seat at the small bar and watched while the talented gentleman behind the stick adeptly crafted two exotic concoctions.

“Be right with you,” the barman said, handing George a cocktail menu and a glass of water. He returned a few moments later, apologizing for the wait. “What can I get for you?”

“Great!” the bartender replied, and with expertise began working on the cocktail. “Our recipe is based on the 1234 formula with a little Jamaican twist.”

“There are so many different recipes for the Planter’s Punch that it has become more of a style of drink than a single cocktail,” he informed George. “The history surrounding the drink’s creation is a little foggy. Some say it was invented and named after Planter’s Hotel in Charleston but there is no evidence to support that claim. Some versions were first mixed in Jamaica and our recipe reflects that, featuring Appleton rum.” Turns out the cat behind the stick was Marco Dionysos. Not only was he a pleasure to watch tending bar, but he also had an amazing knowledge of cocktails and their histories.

The bar was quickly filling up with committed Tiki fans, and having finished his third Planter’s Punch, George realized it was time to pay his check and head back to the hotel.

“Here, a little something to remember your visit to Smuggler’s Cove” said Marco, handing George a souvenir ceramic Tiki mug.

At the end of George’s amazing trip, he returned home and immediately set out to create his own version of the Planter’s Punch. Guess it’s time to fire up the grill, invite some friends over and put on the soundtrack from South Pacific. Cheers!

Shake and strain into an ice-filled double Old Fashioned glass. Garnish with an orange peel and a cherry.

In a mixing glass add ingredients; shake with ice until well blended. Strain into a Collins glass. Garnish with an orange slice, pineapple stick, brandied cherries and a sprig of mint.

For a complete list of Tony’s books, products and bar tools: