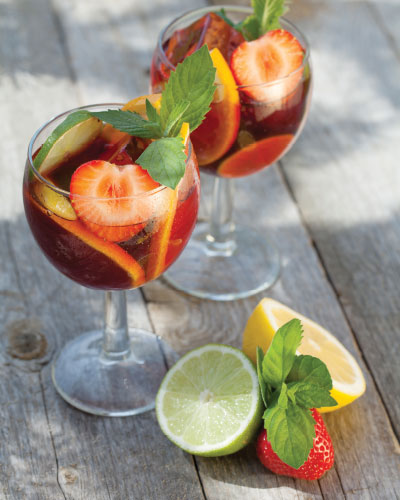 This beverage, historically made with red wine, originated in Spain and Portugal and because of its color, was named after the Spanish and Portuguese word for bloodletting. As of January of this year, the European Parliament ruled that only sangria made in Spain and Portugal could be sold under that name. Sangria has grown to become a popular and refreshing party drink around the world and was introduced to the U.S. at the 1964 World’s Fair in New York.

Over 2,000 years ago, the first sangrias were likely heavily watered down mixes of red wine, water, herbs and spices. The alcohol killed off the bacteria in the water, and the herbs and spices helped to flavor the poor quality table wine. Today’s sangrias use red or white wine, Brandy, soda, spices and a variety of sweeteners and fruit. Because of this, the alcoholic content also varies greatly and ranges from 4 to about 11 percent. Sangrias with white wine are called “sangria blanca” or “cleric” in Argentina and Paraguay. In southern Spain sangria is called “zurra.”

Wine is the dominant ingredient in most recipes and acts as a base. Preparation consists of cutting fruit into thin slices or small cubes, then mixing all ingredients except for ice or carbonated sodas. After several hours or a full day in the refrigerator, the fruit flavors blend together and the ice and any last minute ingredients are added before serving.

“Sangrias are a great way to celebrate summer. And though red wine is a classic for this drink, white wine and even sake are great alternatives,” says Kathy Casey of Liquid Kitchen. “It’s also a great way to utilize seasonal fruits, from succulent summer cherries and berries to lush peaches. Add in honey or organic agave nectar, or other high-quality fruit syrups, to punch up the flavor. One of my new favorite combinations is a tropical sangria made with white wine, Monin South Seas Syrup, a splash of Bacardi Oakheart spiced rum and sliced citrus!”

It’s typically served in the summer months in a pitcher or container large enough to hold a bottle of wine, plus the added ingredients. A lid or other strainer helps prevent fruit and ice from passing into the glass when pouring. A spoon is used to scoop some of the fruit from the bottom with each serving. The recipes for sangria are as varied as the makers, who can show off their unique styles using their favorite ingredients.

“This libation became the rage at the Columbia in the 1960s. The 21st-century version is the best. The use of Torres Brandy elevates this drink to extravagance. Miguel Torres is rightfully proud of his fine Brandy. When he first heard the Columbia was using it in sangria, he was not especially pleased. But when he discovered that the customers consumed 150 cases every month, he was delighted. Who can argue with success?” – columbiarestaurant.com

To make simple syrup, combine one part water and one part sugar in small saucepan. Bring to a boil, stirring to dissolve sugar. Chill before use.

Place ingredients, excluding 7UP, into a large glass container; cover and refrigerate overnight. When ready to serve, pour into an ice-filled pitcher to 2/3 full. Add fresh sliced fruits and top with 7UP; stir gently to mix. Serve in fruit-filled wineglasses.

In a large pitcher, combine all the ingredients and stir with a spoon, crushing some of the fruit. Cover and refrigerate for at least 12 hours, or up to 2 days, to let the flavors marry before serving. Serve over ice and include some of the fruit in each serving. 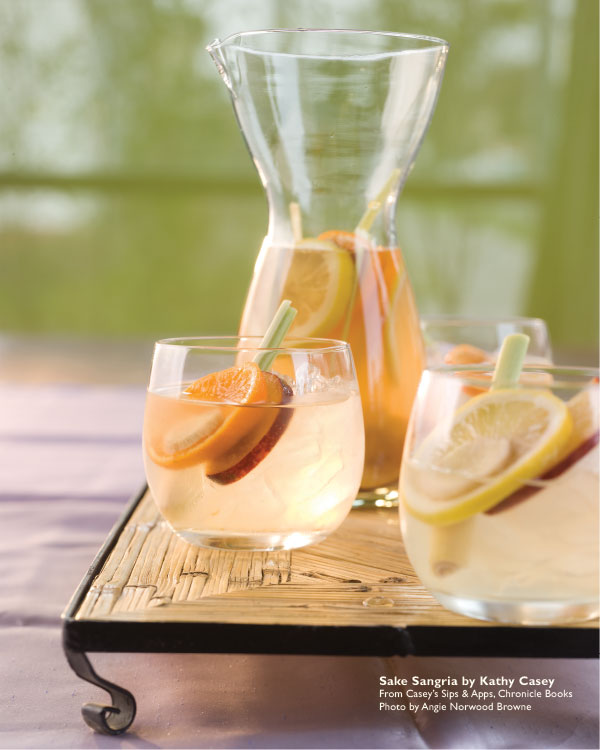