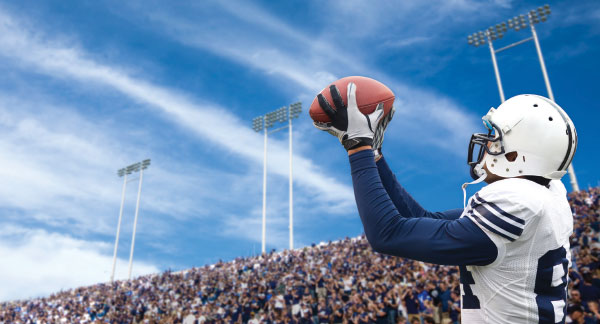 Did you know watching a live game could mean free parking, warm food, cheap beer and a private restroom? To millions of fans across the country, this just means watching the game from the privacy of their home. Tech companies have been hard at work enhancing this experience with high definition minitrons (they call televisions) and bass-jumping surround sound. It’s been the inability of professional sports to progress and enhance the stadium experience that has caused a steady decline in attendance over the past five years.

There are several factors that have consistently led to guest frustration when it comes to catching a live performance. None of them is more important than connectivity, which also happens to solve a few problems we never knew existed. There’s a reason that most students leave college games by halftime, and it’s not just because the buzz is wearing off. The lack of connectivity to their social networks is enough to frustrate even the most fanatical Millennials.

The benchmark in new stadium technology is WIFI networks and more capable mobile traffic. We have seen a drastic increase in uploads versus downloads when it comes to stadium mobile traffic. This means more people are sharing their experience with friends and family while the event is occurring. For the biggest sports fans, this means checking your fantasy score in real time and accessing unique camera angles live on your phone. Fans have even developed more practical uses for connectivity like finding an open parking spot or being directed to the bathroom with the shortest line.

If you follow football, you probably already know about the 49ers new stadium set to go live this season. It has been dubbed the most technically advanced stadium until, well, the next new stadium. Technology changes quickly, so stadiums must continue to innovate to stay current, which leads to long term investments. From a food and beverage standpoint, this could mean big profits for Centerplate, the facility’s concessionaire. The new Levi’s stadium in Santa Clara has been rumored to provide in-seat dining to the majority of seats in the park. Orders placed on mobile phones will be sent to the closest kitchen using ticket-scanning software and will become cashless with mobile payments.

The top four professional leagues in the U.S. are all aggressively pursuing a better connectivity strategy and none more than the NFL. The football league has asked all of its teams to provide free WIFI by 2016 in all stadiums. While this may seem like an outlandish request, it further proves how important an initiative this has become.

While the ticket prices don’t seem to be declining, it’s great to see the value of the stadium experience increasing. Not everyone will appreciate these new technological advances, but there is no denying that the biggest events will be broadcasted live across social media and the stars aren’t on the field.