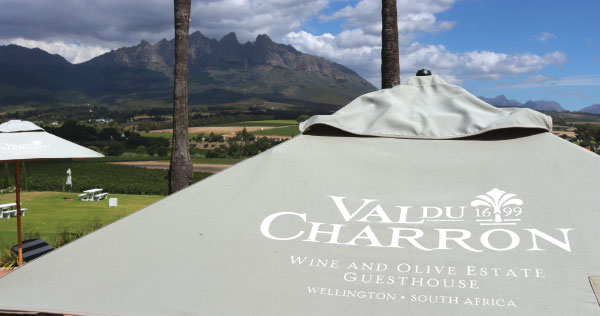 The Val du Charron Estate dates back to end of the 17th century. Val du Charron, which means “Valley of the Wagon Maker,” was actually the original name of what eventually would become the town of Wellington. The winery is located in the heart of South Africa’s Western Cape Winelands and is less than an hour northeast of Cape Town. It covers more than 100 picturesque acres, overlooks the Bovlei Valley and also affords spectacular views of the majestic Hawequa Mountains to the east.

The first vineyards in the Western Cape area were planted in 1655, but the first wine from the region was not produced until 1699, the year the Val du Charron farm was initially deeded. One notable early fan of the Western Cape Winelands was Napoleon, who is said to have ordered 30 bottles of Vin de Constance, a dessert wine made from grapes grown south of Cape Town, to be shipped each month to his prison cell on the Italian isle of Elba, to ease his confinement there in the early 1800s.

Only two decades ago the rolling farmland of Val du Charron was in total shambles. The property had fallen into severe disrepair and then remained abandoned for about 20 years, only to be brought back to life early in the 21st century, when a couple of ambitious South African brothers took notice of its past, as well as its potential.

“The original Val du Charron farm was proclaimed and deeded to Pieter Erasmus in 1699, around the same time that French Huguenots settled in the area, bringing with them the art of winemaking. The first wines were bottled on the property in 1702,” says Craig Entwistle. “I purchased the farm, along with my brother Stuart Entwistle and his wife Cathy, in 2006. We are just the fifth family to hold title.” 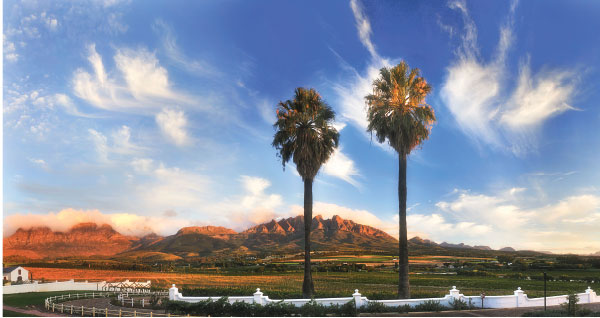 The expansive 120-acre estate today encompasses 64 acres of vineyard, a 10-acre olive grove and a winery. The property also has been revived for tourism. It features an eight-suite bed-and-breakfast guesthouse, a swimming pool, walking and biking trails, a fishing basin, and elegant facilities for weddings and other private parties and functions.

Stuart and Cathy Entwistle live at Val du Charron, where they handle day-to-day farm and guesthouse operations. Craig Entwistle, who has lived in the United States since he was a teenager, directs the winemaker’s marketing efforts from St. Simons Island, Ga., where he doubles as a sales executive with Rich Products Corporation’s Consumer Brands Division.

The Entwistles made sizable personal investments to get Val du Charron back on its feet, nimbly orchestrating all the necessary manufacturing assets and recruiting one of South Africa’s foremost winemakers – the legendary Bertus Fourie – to take over the farm’s blending process and create new wine masterpieces. Renowned as the man who first produced the “Coffee Pinotage” style of wine in South Africa, Fourie in 2009 brought his winemaking knowledge, passion and ingenuity to the winery and has been instrumental in helping the estate make its mark on the wine industry. A strong believer in blending, he typically produces compositions that are more complex, richer and more finessed than any cultivar can induce on its own.

“We formed less than a decade ago and started attracting serious attention very quickly,” says Entwistle. “Two of our early super-premium products – the Val du Charron Vintage 2010 Black Countess and the Vintage 2009 Erasmus – captured gold and silver medals at South Africa’s 2011 Michelangelo CCL Label International Wine Awards. The gold and silver prizes marked the first time a South African vineyard’s products had been so decorated on their first entries into the Michelangelo competition.” He added, “In 2013, the floodgates opened when the Val du Charron brand brought home nearly a dozen prestigious awards for its lineup of super-premium wine products. We were also thrilled to be named 2012 ‘Exporter of the Year’ by the Cape Chamber of Commerce and Industry, the oldest member-based business organization in Africa.”

The Entwistles’ venture has taken off due to a number of factors, chief among them the family’s prodigious dedication to quality. Their enthusiasm and staunchness has resulted in some of the finest grapes to come out of South Africa’s historic wine country, for great tasting, super-premium products affordably priced for high value. Their creative approach also has quickly carved out a place for Val du Charron’s high-end estate wines in some of the very best wine cellars.

The Reserve brand lineup includes a quartet of single varietal wines – Cabernet Sauvignon, Chardonnay, Shiraz and Pinot Gris – which make up the super-premium Val du Charron Reserve brand. Each product in the lineup is handcrafted from the estate’s fruit, with a small production run assuring that quality remains consistently high.

Their Premium Blend category features an assortment of distinct, super-premium-blended wines, bearing a label with historical references to the farm and the area. The blends are treated separately to emphasize their unique characteristics and flavors.

Today there are roughly 600 wineries in South Africa, up from approximately 430 in 2002. The country is now the world’s eighth largest wine producer, accounting for about four percent of all global output. More than 526 million liters of wine were exported from South Africa in 2013 – a 26 percent increase over the previous year.

“Wine exports from South Africa to the United States (the world’s largest consumer of wine) have been particularly brisk lately. The 32 million liters exported to America in 2013 were the equivalent of 3.6 million 9-liter cases and represented a 37 percent volume increase over 2012,” says Entwistle. 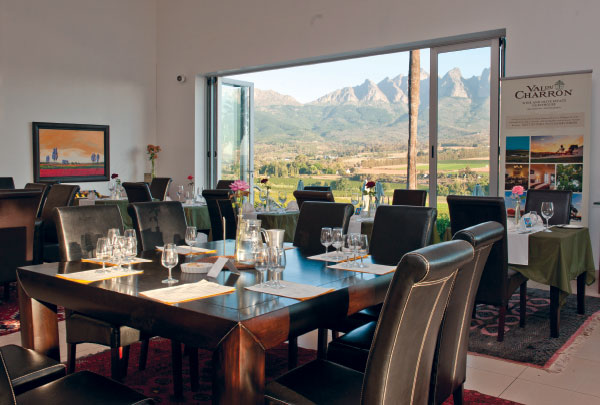