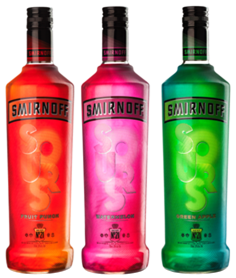 Have fun and celebrate good times with this electrifying Sour line.  SMIRNOFF Sours take the great taste of SMIRNOFF No. 21 and adds an unforgettable sour kick with three tangy flavors – Green Apple, Watermelon and Fruit Punch.

The delicious tart taste of the Sours line won’t stop your hilarious post-shot sour face, but it’s all in fun, so embrace the face. SMIRNOFF is challenging consumers of legal drinking age to share their sour faces on their social channels using the hashtag #myfacewhen I tried a shot of New SMIRNOFF Sours. The brand will also be promoting social responsibility with the launch of SMIRNOFF Sours by reminding everyone to drink responsibly whether at home or in the bar.