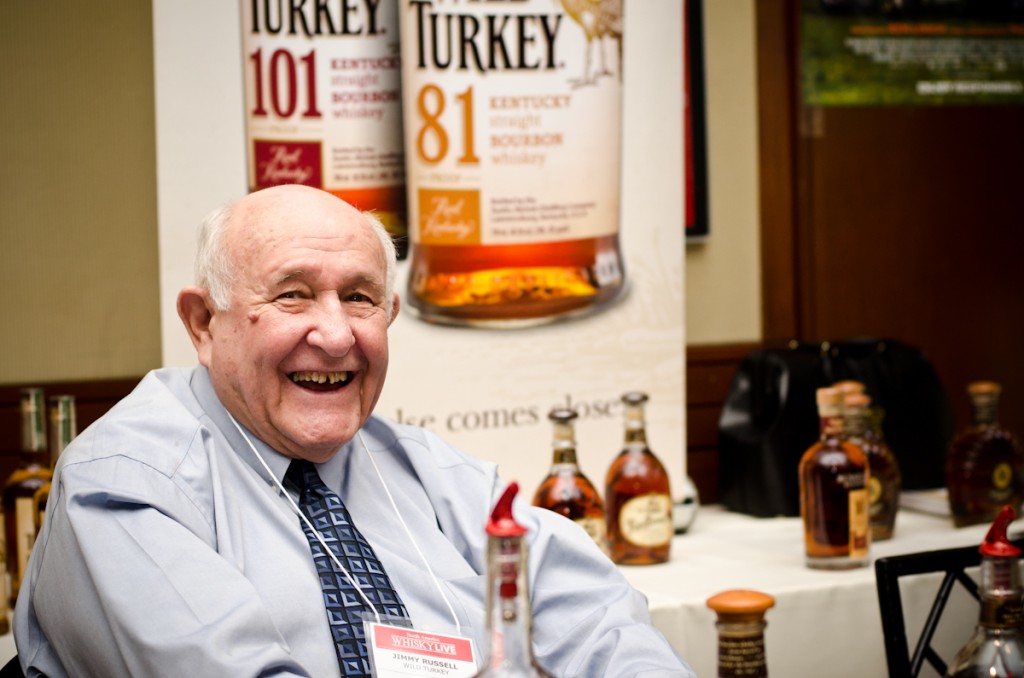 LAWRENCEBURG, KY (SEPTEMBER 2, 2014) – In a year replete with achievements, honors, and even a special, limited-edition Diamond Anniversary Bourbon, Wild Turkey’s Master Distiller has reason to celebrate. Reaching 60 years in any industry is a feat within itself, but James “Jimmy” Russell is no ordinary Master Distiller. As the longest-tenured, active spirits Master Distiller in the world, Jimmy marks 60 years of service with Wild Turkey® this month and will be granted a Lifetime Honorary Membership to the Kentucky Distillers’ Association’s Board of Directors. Bestowed to only five other influential individuals within the organization’s storied 134 year history, Jimmy will receive this prestigious honor in a surprise ceremony to be held during today’s KDA board meeting at the Wild Turkey Distillery.

Known among peers as the “Buddha of Bourbon” and the “Master Distiller’s Master Distiller,” Jimmy is a well-respected champion of Bourbon, and a dedicated craftsman in the art of whiskey-making. With this Lifetime Honorary Membership, Jimmy joins an exclusive club of titans in the industry, including the most recent induction of Bill Samuels, Jr. of Maker’s Mark in 2011. Other members include Dr. Frank Kraus of Barton and Jim Beam distilleries, Charles King McClure of Stitzel-Weller Distillery, James Bigstaff O’Rear of Schenley Distilleries, T. William Samuels, Sr., founder of Maker’s Mark and his son, Bill Samuels, Jr.

“If there was a Mount Rushmore of Bourbon, Jimmy would be one of the first faces on it. He’s a true entrepreneur and has dedicated his life to making Wild Turkey his way – with passion, dedication and enormous respect for the craft,” said Eric Gregory, president of the Kentucky Distillers’ Association. “We are proud today that he joins this elite group as a Lifetime Honorary Member and we welcome his continued service to the KDA, to our signature industry and to our great Commonwealth.”

As his own tribute to Jimmy’s milestone, Eddie Russell, a fellow Bourbon Hall of Famer™ who’s been making whiskey by his father’s side for more than 30 years, wanted to make something extra special for his beloved father and mentor, and created Wild Turkey Diamond Anniversary, an exclusive, limited-edition mingling of 13 and 16-year-old whiskeys that’s as special a Bourbon as Jimmy is a distiller.

Eddie hand-selected rare barrels that had been aging for 13 and 16 years (nearly twice as long as the flagship Wild Turkey 101) that yielded a spirit with tantalizing notes of caramel and vanilla, complete with a spicy oak finish.  This commemorative Diamond Anniversary limited-edition was released last month, and is available nationwide, but in small quantities.

Continuing the celebrations and honors for the “Year of Jimmy Russell,” the Wild Turkey family put together another tribute in the form of a documentary entitled Jimmy: The Man Behind the Bourbon, allowing fans both old and new to get a glimpse into the life of this legendary whiskey maker. The film follows this iconic man as he goes about his business, making the best Bourbon in the world and features family, friends and a flock of fellow Bourbon legends, including Fred Noe, the grandson of Jim Beam, Craig Beam, Master Distiller of Heaven Hill and Governor of the Commonwealth of Kentucky Steve Beshear.

Earlier this year, Jimmy also received special honors from fellow Kentuckians; both Gov. Beshear and Lawrenceburg’s Mayor Edwina Baker commended Jimmy and his contributions as a major force in propelling Bourbon culture around the world.

At A Glance: Jimmy Russell