Is Straight Rye Whiskey Prepared To Be The Next Darling Of The Whiskey World?

Once a favorite of the “Greatest Generation,” straight Rye Whiskey had all but faded into obscurity with only a few old dusty bottles lingering around the back bar. In its day, bold and spicy Rye Whiskey was always used to make an old-fashioned or Manhattan. Similar to Bourbon in the way it’s made, the difference lies in the mash. Bourbon must be 51 percent corn, which gives it its sweeter character, while Rye must be 51 percent rye, which tends to have a spicier flavor. In fact, this new generation of Rye Whiskies has a much higher rye content, many of which are in the 90-percentile range.

In my quest to discover more about this category, I asked The Modern Mixologist and ITM contributor, Tony Abou-Ganim, what he thought about the future of Rye Whiskey in today’s cocktail environment. He had this to say, “As more and more bars and bartenders resurrect tipples such as the Sazerac and the Rattlesnake, as well as fashion their own contemporary classic cocktails, the straight Rye Whiskey category will not only continue to grow but will flourish!”

One hurdle for today’s Rye producers is to orientate today’s consumer to the attributes of Rye Whiskey as opposed to other types in its class, such as Bourbons, Wheat Whiskey, blends and so on. I would assume every indigenous drinker in New Orleans is familiar with straight Rye Whiskey, due to the popularity and history of the Sazerac and Vieux Carré cocktails. But getting it popularized into the mainstream of hotels and lounges may take a little time. Looking for a little insight, I asked Joey Scorza, the revered longtime head bartender at the InterContinental Miami, what role Rye Whiskey plays in her cocktail bar. She answered, “Rye is more popular today than ever, especially with the classics, the Manhattan and old-fashioned. True Rye drinkers know their Rye, and then we get customers that have never tasted Rye. I find the best way for them to appreciate the taste is to have them sample the different Ryes we carry before they order a cocktail. I love doing this because it is collaboration and they really do notice the difference in their drink.” 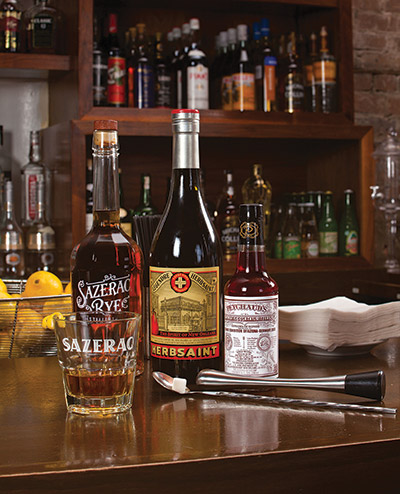 It seems straight Rye Whiskey needs a champion cocktail. Some would say it’s the Sazerac. It could be, but the Herbsaint and Peychaud’s bitters combo may be a little much for the majority. Consider its New Orleans cousin, the Vieux Carré — a lot going on in that drink and it’s not a mainstream taste at all. Old-fashioned, Manhattan? Maybe. I’m not sure these drinks will ever fly with the Millennials, but you never know. Rye and ginger is always a good call — simple and tastes good. After all, one of the most famous drinks ever is a Jack and Coke (something I’ve always thought of as a good waste of Jack).

I suggest a Rye Smash — easy to make but still a good bar drink. Its recipe is so old even Baby Boomers don’t know its origin. I read where cocktail historian David Wondrich described it as the most popular drink of its time (the height of popularity for the smash was in the 1850s and it remained a favorite of imbibers well past the Civil War). See Templeton’s version below.

To dig into this cocktail thing a little deeper, I asked bon vivant Brittany Chardin, head shaker at Movers & Shakers Beverage Consulting, for her idea of the classic Rye cocktail recipe. She gave her usual enthusiastic answer to my question.

“I am a fan of many spirit-forward Rye drinks — the Vieux Carré, Sazerac, Rye Manhattans, Greenpoint — but the one standout for me is the Boulevardier. This Whiskey-based kissing cousin of the Negroni as well as the Manhattan, was invented in Paris in the late 1920s and is my top fall and winter months’ go-to cocktail. I serve it on the rocks, as there is something very meditative about the clinking sound of ice, specifically in Whiskey, that is the closest to a cozy fire-going-in-the-hearth-while-the-wind-blows-outside sound that I can think of.

“For the Boulevardier, I do a slight ratio adjustment from the classic Negroni and I use Carpano Antica Formula as the Vermouth, for the richer mouth feel as well as for the orange and caramel notes. This slightly softens but plays well with the dryer, bracing and bittersweet flavors of the Campari and the Rye, in the way that Benedictine and Yellow Chartreuse do in the Vieux Carré and Greenpoint. Given the huge bartender love for both Rye and Campari, this drink should be more popular than it is. Time for a comeback, within a comeback!” 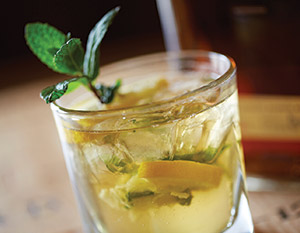 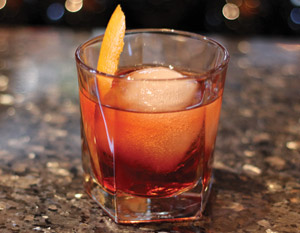 With all that being said, I took some time to cumulate notes on some Rye Whiskies. I can’t wait to try them in these cocktails. Enjoy! 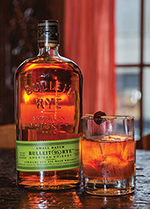 One of the more popular brands is Bulleit Rye. It was only a matter of time before Tom Bulleit created a Rye Whiskey to complement his already popular Bourbon. It boasts a very high rye content of 95 percent rye with 5 percent malted barley in the balance. Bulleit Rye is an award-winning, small-batch straight Rye Whiskey with a character of unparalleled spice and complexity. Released in 2011, it continues to enjoy recognition as one of the highest quality Ryes available. The flavor is notably smooth with hints of vanilla, honey, and spice, and offered at 90 proof.

Until Prohibition, New York was known for its Rye Whiskey. This feisty spirit was the basis for the legendary Manhattan cocktail. Rye had not been produced in New York for over 80 years, but Tuthilltown Spirits’ Hudson Manhattan Rye Whiskey signals the return of the quintessential New York Whiskey. Made from whole grain rye one batch at a time, it is not the blended Rye Whiskey your parents used to mix with soda. This is honest Rye Whiskey at 92 proof. It is fruity, floral and smooth, with a recognizable rye edge that leaves no doubt about the origin of the spirit. Each bottle is hand-filled, capped, waxed and numbered. You owe it to yourself to try this return of a classic American spirit.

Knob Creek, known for their Kentucky Bourbon, makes a mighty fine straight Rye also. It is made in small batches, patiently aged in the deepest charred barrels and bottled at a full 100 proof to maintain their approach to big flavor. And what big flavor it is! Using the highest quality rye is what gives it its unique spicy and smooth flavor.

WhistlePig Rye is a 100 proof straight Rye Whiskey bottled on a historic farm on 230 acres in Vermont. The WhistlePig farm only bottles the product, they don’t produce it. They are, in fact restoring one of the barns to build the WhistlePig distillery. On their acreage, they grow some of the finest organic winter rye grain around, which they will use in their “farm-to-bottle” single estate distillery. I can’t wait! Meanwhile, enjoy this exceptional example of fine 100 proof Rye Whiskey. By the way, they do have pigs on the farm — special pigs, Mangalitsa pigs. But that’s not why it’s called WhistlePig.

WhistlePig Rye is a 100 proof straight Rye Whiskey bottled on a historic farm on 230 acres in Vermont. The WhistlePig farm only bottles the product, they don’t produce it. They are, in fact restoring one of the barns to build the WhistlePig distillery. On their acreage, they grow some of the finest organic winter rye grain around, which they will use in their “farm-to-bottle” single estate distillery. I can’t wait! Meanwhile, enjoy this exceptional example of fine 100 proof Rye Whiskey. By the way, they do have pigs on the farm — special pigs, Mangalitsa pigs. But that’s not why it’s called WhistlePig.

Sazerac Rye Whiskey symbolizes the tradition and history of Rye Whiskey as well as New Orleans. This famous Rye Whiskey dates back to the 1800s, when saloons, known as coffee houses, were lining the streets of New Orleans. It was at the Sazerac Coffee House on Royal Street where local patrons were served Antoine Peychaud’s cocktail, which became known as the Sazerac Cocktail, and America’s first branded cocktail was born. 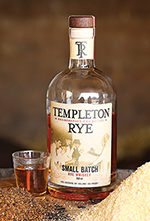 When Prohibition outlawed the manufacture and sale of alcoholic beverages in 1920, many enterprising residents of a small town in Iowa chose to become outlaws by producing a high caliber and much sought-after Whiskey known as Templeton Rye. Based on its extremely smooth finish, the American Rye Whiskey earned the nickname of “The Good Stuff” and quickly brought a certain degree of fame to Templeton (pop. 350). As the premium brand of the era, Templeton Rye fetched an impressive $5.50 per gallon, or approximately $70 by today’s standards. Over the course of its storied history, Templeton Rye became Al Capone’s Whiskey of choice, quickly finding its way to the center of his bootlegging empire. Hundreds of kegs per month were supplied to Capone’s gang, who in turn filled the demand of speakeasies throughout Chicago, New York and as far west as San Francisco. Today, using the original recipe of Alphonse Kerkhoff, Templeton Rye remains on the “Good Stuff” list for all of us to enjoy.