As the weather turns from the heat of summer to a chilly fall and the cold snap of winter, cocktail menus follow their own evolution from light, bright citrus and fresh “green” flavors to the darker, earthier and warmer flavors found on fall and winter menus.

For many, autumn and winter flavors may bring to mind rich, sweet flavor profiles. To be sure, there’s no shortage of these indulgent, dessert-like drinks on today’s seasonal menus, like the Pumpkin Pie Martini found at Granite City Food & Brewery this season, or the plethora of peppermint, white chocolate and dark chocolate creations. But seasonal cocktail flavors are also maturing as mixologists cast farther and wider for more sophisticated flavor profiles that range from smoky to earthy, spicy to bitter.

Dark, bitter notes continue to add a decidedly adult flavor profile to drinks. This can be found in on-trend spirits like Aperitivo Cappelletti; its taste rounds off those biting flavors with oranges and herbs. It’s featured as the star ingredient in beverages such as the Cappelletti Spritz from Marta’s in New York, where it is finished with Prosecco and grapefruit. Or it can be used in a supporting role, as in the Bella Rosa cocktail from New York’s Franny’s, where Cappelletti is paired with vodka, maraschino, lime and bitters.

For dark, bitter flavors that add a more interesting note to drinks, some bartenders are turning to burnt sugars and caramels as a more indulgent and mature take on a sweet ingredient. The Gin Joint in Charleston, S.C., doubles down with the Ichabod Crane, a cocktail packed with seasonal ingredients including buttered bourbon, spiced pumpkin seed, orgeat, burnt sugar and vanilla cordial. Its Prize Fighter cocktail pairs burnt sugar with Carpano Antica, curacao, Campari, rye, balsamic and fig.

Figs are just one example of the types of produce mixologists are leveraging throughout the fall and winter, a must to keep up with fresh, local seasonal trends year-round. Datassential recently covered the wide variety of cold-weather produce options that chefs and bartenders are using on menus, in our October edition of FoodBytes. 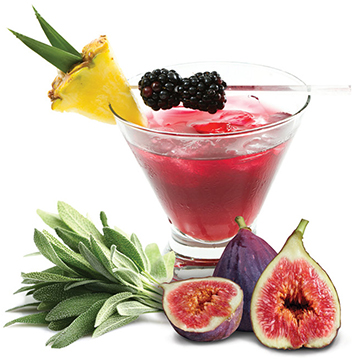 Apples and pears, for instance, continue to be popular flavors for fall and winter, as terms like “orchard fresh” and “harvest” show up on cocktail menus, while ciders/cidres keep growing. The Teardrop Lounge in Portland features one of the more unique apple drinks with their Marquess of Queensbury, a “bright celebration of harvest” in which an apple oleo-saccharum punch base is mixed with Macchu Pisco, Clement Créole Shrubb, Logsdon Farmhouse Seizoen ale and maple bitters.

Beyond the traditional, chefs are also looking to less familiar, less common produce options to flavor seasonal drinks. Consider the Sangre Y Tierra, one of the house cocktails at The Brooklynite in San Antonio, which mixes beets with mezcal, ginger and lime, and the Wilde Vine cocktail at Villains Tavern in Los Angeles, which pairs red grapes with Jameson Black, Luxardo, cane sugar and lemon.

We’d be remiss not to mention pumpkin, the powerhouse seasonal flavor that continues to be the go-to option for beverages across the spectrum, from hot coffee to cold beer — though it has come to signify a spice combination far more than the actual squash. Pumpkins began impacting fall cocktail menus as early as August and September this year, with options like the American Pie at Denver’s Williams & Graham, which goes all out with pumpkin salted caramel, pumpkin cream, rye and calvados. At Portland’s Teardrop Lounge, the Sleepy Hollow features pumpkin cordial paired with Amaro Montenegro, Rittenhouse rye, mandarin and candied sage. 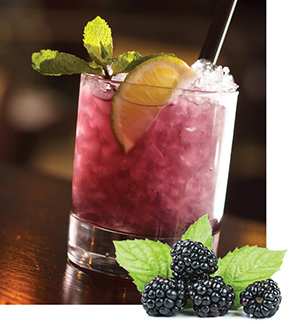 Sage is just one of the seasonal herbs mixologists are using in cold-weather drinks. Williams & Graham also uses it in their Blackberry Sage Smith, along with Johnny Drum Private Stock bourbon and blackberries, while the Glass Haus Kitchen in Charlottesville pairs it with Yellow Chartreuse, Chambord, lemon and ginger ale in their FarmHaus cocktail . Rosemary, another autumn favorite, flavors Mel’s Gibson at the Broken Shaker in Miami, along with gin and onion-infused dry vermouth. And the Sugar House in Detroit offers the Medicated Genius with a rosemary-caramel syrup mixed with orange bitters, blended scotch, Bonal Gentian and rum.

For an earthier note, nut varieties are a seasonal ingredient that lends heft and indulgence to savory and sweet autumn and winter dishes and drinks. Back at the Gin Joint in Charleston, walnuts are featured in the Fair Well Cocktail along with rye, scotch and Campari. Across the country at The Violet Hour in Chicago, black walnut liqueur pairs with coffee-brown sugar syrup, Flor de Caña 7 and Sailor Jerry Rum. 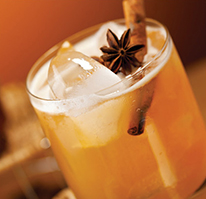 Rum is just one of the ways bartenders add a rich, spicy flavor to warm up the colder months, with these aroma and flavor notes creating a more grounded and substantial drink. At this time of year, brown spices are featured in drinks like the Painkiller at Scholars in Boston, where they are paired with house-infused spiced rum, pineapple, coconut and orange. 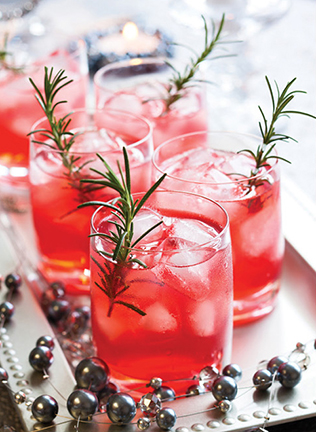 Those evergreen flavors of juniper, pine, fir, cedar, etc. offer mixologists a unique way to evoke the feel of colder months in a drink. Fedora in New York City created the Tito Santana From The Top Ropes cocktail, which mixes pine liqueur with bitters, rum and bourbon. Across town at Brooklyn’s Clover Club, the aptly named Royal Tannenbaum uses a pine tincture with rye, grapefruit, Cynar, honey and lemon.

And mixologists have really only just begun to experiment with more mature and innovative seasonal flavors. While classic, comforting flavors will always have a place on fall and winter cocktail menus, bartenders are tucking away a few new favorites and seasonal surprises to warm our bodies and souls, as the days grow short and cold.