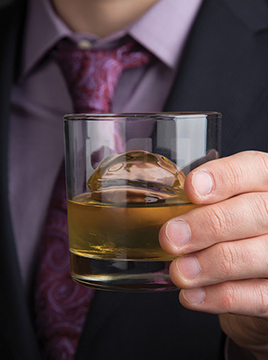 The American ice industry started in the 1800s when a Bostonian by the name of Frederic Tudor sent a shipload of lake-cut ice to Martinique, in the hopes of introducing the Tropics to the joys of cold, refreshing beverages. Lack of appropriate storage facilities doomed the majority of his cargo to melt. Undaunted, he tried again and again, until he was able to gain a foothold not just in Martinique but also across the West Indies. Americans became obsessed with cold: cold water, cold cocktails and readily available ice cream. By the end of the 19th century, Tudor’s company was shipping ice to India, Australia, Africa and South America. However, modern refrigeration techniques, as well as rapidly improving artificial ice machines, sounded the death knell of the ice trade; and by 1930, the last American ice company had ceased to exist.

For the rest of the 20th century, commercial ice production focused on displacement and volume rather than density and integrity. In a highball cocktail made with brittle, fast-melting ice, the ice will displace more liquid and allow more ice to be packed into a glass, decreasing the amount of alcohol and mixer needed to fill the glass, thereby increasing your margin on that cocktail. However, this leads to watery, lukewarm, weak cocktails and gradually the drinking public has begun to spurn such drinks.

Today we are in the midst of an ice revolution. Bartenders and enthusiasts alike are freezing ice in large molds, and buying large blocks from sculptors and cutting them with chainsaws. Some are even starting companies dedicated to supplying bars and restaurants with hand-cut, crystal clear ice for spirits and cocktail service. 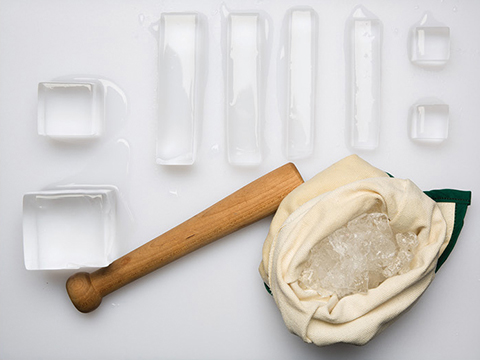 Clear ice is formed in machines, such as those manufactured by Clinebell, which simulate the lake-freezing method, but upside down. Water is placed into a large metal springform basin with a freezing plate on the bottom; once the ice “seeds,” or nucleates, on the plate, a pump is attached that keeps the water moving constantly. This way, impurities such as air and minerals can’t freeze into the block. A full-size block will generally take two to three days to freeze and weighs around 300 pounds. This block is then moved to a cutting table using an engine hoist, cut into manageable blocks with a chain saw, and then chopped into small blocks using a band saw.

Large format, clear ice is ideal for serving high-end spirits like single malt Scotches and bourbons. The absence of impurities and air means it melts at a slower rate, and the greater volume relative to its surface area means it dilutes much more slowly, preserving the integrity and flavor of the spirit for a longer period of time. Market research has shown that purchasing ice for a low-cost cocktail, such as an Old Fashioned, can actually increase sales of that cocktail, improving both revenue and cost.

Ice has finally returned to a place of prominence in the American drinking scene, and as artisanal ice companies proliferate across the country, the importance of proper ice will only rise.