Last night my friend was craving a rack of ribs but the neighborhood barbeque place (walk-up counter, no service) was closed on Sunday! So we began a process of elimination and decided to try one of the local steakhouse chains because we like their burgers and enjoy sitting at the bar in front of a big screen. Sunday football was on TV and my Cowboys were playing the late game at home against one of their favorite nemeses, the Giants. (In deference to my adopted hometown, let me state that I am also a fan of the Jaguars.) The parking lot was full so we were taking a chance on getting a place at the bar. Lucky for us, there was a booth in the bar area, center to the TV.

We sat ourselves down and waited about four minutes (good timing, though we know four feels like ten) when along comes our friendly waitress with a big ole’ smile and a hearty greeting. My friend launched into his question about the ribs and our waitress responded favorably, pulling out her order pad. With our food orders placed, I asked what was on draft; we learned there was Happy Hour pricing on draft beers. Oh boy! Again, lucky us. By now we knew our waitress’s name. Jen is a 20-30 something woman who, we observed, had that entire bar area under control, even with every booth and high top occupied. That smile — she flashed it for everyone.

Within a few minutes, our ice-cold drafts arrived in giant mugs, delivered by an equally friendly young man. We leaned back to watch the game, anticipating the ribs, which Jen said were awesome. The ribs were awesome and the experience was great. So great that we asked to speak with a manager for the sole purpose of complimenting the service — a rarity. Jen’s timing, attitude and service were so right-on that we were compelled to tell someone. Needless to say, we left a large tip. The seemingly younger manager was also quite pleasant — could her great attitude be the key to a welcoming staff? I would love to sit in on her staff meetings to see how they create this aura of friendliness. So, guess what? Next time we have a hankering for ribs, we will definitely go back to that same place. 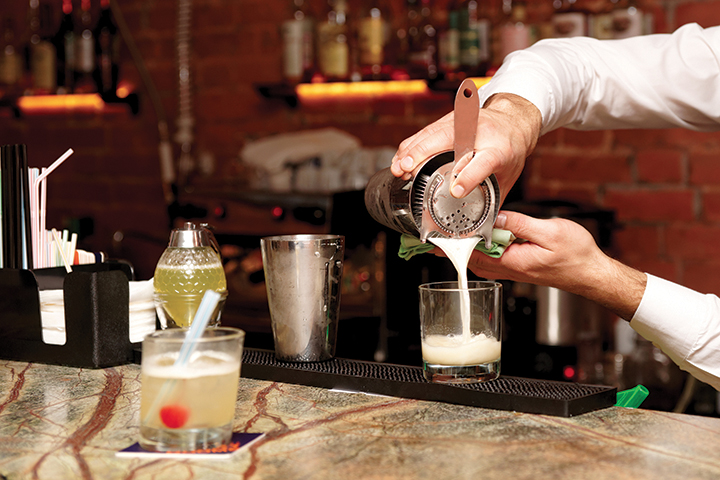 How often do we all talk about the importance of service? And how effortless is it to simply acknowledge the guest in your station, be attentive and SMILE? So, think about this: If you were to design the service program for your bar, what would be the three most important behaviors you would want to instill in the hearts and minds of your staff?

Perhaps this will help: I asked many people who enjoy dining out and consider themselves foodies, to describe what they consider good service and bad service. The interviews were done between the two largest demographic groups, Boomers and Millennials, who together comprise half of the population. Starting with what is considered bad service, the top two complaints were not being acknowledged within the first three minutes and a sourpuss attitude. No surprise there. The top two attributes of good service were, predictably, timely acknowledgement and attentiveness.
Here are a few of the results.

When we asked Ken of KiT Photos his opinion he said, “The server should be attentive and make no assumptions.” Automatically bringing the same beer on the second round as the first because the guest flagged you down is being assumptive. What if the guest did not like the first beer or wanted to try something different the second time around? And having to flag down the server is never a good thing.
James Moreland of Moreland Neat, who is a luxury lifestyle and bar expert, referred to a New York City craft bar where bartenders pay attention to detail. He explained, “They prepare excellent crafted cocktails and their service is top tier. There’s no snootiness. They are expected to craft great cocktails — it’s not a privilege that the customer has to request but a standard of service they should expect.”

“Personally, the greatest component for good service is being approached by the server within five minutes or less,” says Sharon McMahon, hospitality industry professional. “Nothing is as bad as sitting at a bar and having the bartender walk past you without acknowledging you, the guest,” adds Sharon. Ken reiterated this sentiment, describing bad service as “inattentive and having a bad attitude.” All the people interviewed spoke about the desire for the server to get the order right, have knowledge of what they are serving and correcting it on their own if it is wrong! Of course to correct something, one must first be aware.
Samantha Flahive, student and actress, along with a group of her friends, listed bad service as long waits for drinks and food, bad attitude from server, rude hostess or server, and an incorrect order. They consider good service as “getting my drink and food in a timely manner from a pleasant server who is attentive and patient, and seems to care about my experience by showing up at least one time to make sure everything is okay with my order.”

I then contacted a seasoned and well-respected hotel manager who works day in and day out with servers, bartenders, chefs, managers, hostesses and all types of hospitality service industry personnel. Paul Anthony Rossi, director of Food and Beverage/Event Management at JW Marriott Camelback Inn Resort & Spa, describes good service as “greeting within a few seconds of being seated, great menu knowledge and suggestions before I look at the menu, and a pleasant disposition.” Paul tells his employees, “Always greet your guests within 15 seconds of seating, give a tour of the menu and suggestively sell a signature drink. Be attentive and anticipate your guests’ needs and read table cues.” 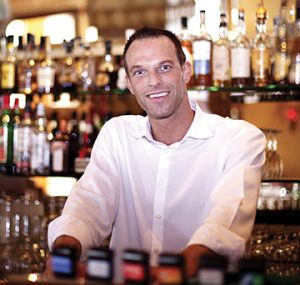 “Act like you want to be working there!” is Samantha’s advice to on-premise service workers. When I asked Paul to give me an example of a compliment he might receive from a guest about good service, his response was, “very attentive and made me feel at home and welcomed.” Throughout the hospitality industry, the experts, professionals and guests themselves offer the same advice to servers: be thoughtful and customer focused.

Operators — if you ever want to be respected as a consistently good place to drink and eat, or acknowledged for your employee leadership, or win an award for being the best at something … then fix the service from the front door to the bar and tables.  Make every guest visit memorable. You don’t have to provide French Laundry’s expert, flawless, highbrow service, just hire and train for friendly, competent service. Design a training program that focuses on the guest and rewards the employee for exemplary service.

The most successful chains, from the fast-casual to the most influential cocktail bars, all chant the same mantra, which is “attention to detail and a consumer-centric approach.” What matters most to customers is how they are treated by the employees, and the primary element that distinguishes you from the competition is your employees. Smile and the world smiles with you. We have all heard it over and over and over and over, and yet how many of us actually apply the principles that encompass good service? A people culture will ALWAYS pay dividends.