Jim, Jack and Johnnie … “It’s a man’s world” may never have been a truer saying than when applied to the world of spirits. At a glance, men seem to dominate the liquor shelf. But one does not need to look very hard to see that women have been influencing spirits since, well, pretty much the beginning of distillation.

Cleopatra the Alchemist, one of the leading female scientists of the third century, is widely credited with inventing the alembic still. Not surprising when you consider that women in Greco-Roman Egypt were respected chemists and dominated in the field of fragrance and cosmetics experimentation. Sumerian women are credited with inventing beer making in 4,000 B.C. Since the first step of whiskey making is basically the same as making beer, it’s not a stretch to say that for thousands of years, women have been making major contributions to spirits. 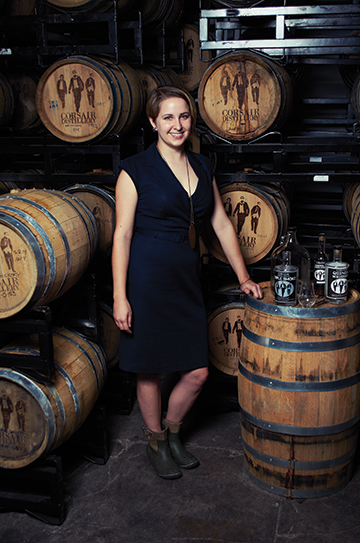 In his book Whiskey Women: The Untold Story of How Women Saved Bourbon, Scotch and Irish Whiskey, author Fred Minnick asks, “Without Sumerian women fermenting barley, would modern whiskey exist?” Indeed! Even Corsair Distillery Head Distiller Andrea Clodfelter, who just led the Nashville-based small batch facility to win the American Distilling Institute’s prestigious “Distillery of the Year” award, got her start in home brewing. Credit the numerous influences of government regulations, religious pressure (including concerns over witchcraft) and societal norms in Europe and America, with both largely curtailing interest and limiting women’s roles in the production of beer and spirits during the next six or seven centuries.

That’s not to say that women were absent altogether. Women continued, in small numbers, to be involved in all aspects of the business including owning some very high-profile distilleries, such as Laphroaig and Johnnie Walker, and shaping brands such as Maker’s Mark. 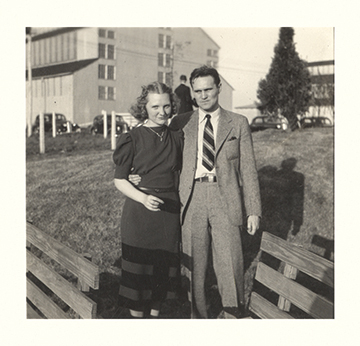 In September, Margie Samuels, wife and co-founder of Maker’s Mark with her husband Bill Samuels, Sr., was the first woman inducted into the Bourbon Hall of Fame for work with a distillery. Margie made invaluable contributions to Maker’s Mark and is credited as the mastermind behind the name and trademark, the distillery’s aesthetic and its emphasis on tourism and, not least importantly, the unique bottle design, label and, of course, the iconic use of red wax. In an effort to ensure her husband’s bourbon stood out, Margie got inspired by her collection of 19th-century bottles of Cognac, which were often sealed in wax. She experimented by filling the family deep fryer with red wax, and the first bottles of Maker’s Mark were dipped right in the middle of the Samuels’ kitchen.

“Historically, distilling was tough, dangerous work and like many ‘dirty’ jobs, was the realm of men. But as these jobs got safer, thanks to workplace and technological changes, and as more women joined the workforce, it was inevitable there should be more women,” said Litty Mathew, co-founder of downtown Los Angeles’ Greenbar Craft Distillery, the producers of the world’s largest portfolio of organic, handcrafted spirits.

Litty is correct: There are lots of women in the spirits industry today. They are forging ahead working as distillers, creating new brands, managing businesses, and thriving as consultants, brand ambassadors, bartenders and bar owners.

Parallel to the changes in other predominately male fields such as science, business and mathematics, women are encouraged today by the success of other pioneering women. 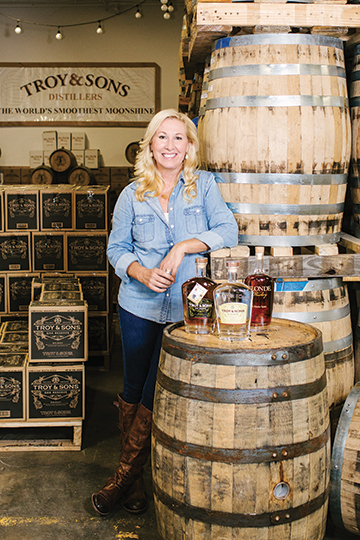 “Unfortunately, I didn’t know any women in the spirits industry when I got started in 2008. I wish I had! I was motivated by the big names in business like Oprah Winfrey, Martha Stewart, and even Melinda Gates. I admired women that blazed their own trails, who worked in the world to which they were called, and who overcame great challenges to be revered there,” said Troy Ball, the president of Asheville Distilling Company, distillers of Troy & Sons’ line of premium moonshine and whiskies.

“Recently, I have met three women distillery owners and three women distillers. We now call ourselves
‘The Dames of Distillation.’ After a weekend retreat in Asheville, North Carolina, we found we had so much in common that we decided to band together to further our goals of building great American brands.”

If moonshine is not the first spirit that most people think of when they learn a trailblazing lady is working the still, is a single malt produced in the heart of the Cognac region of France? Brenne Whisky was awarded “Best New Spirit” by Food & Wine magazine. Brenne’s producer is the recipient of this year’s “Innovator of the Year” award by Whisky Magazine — pretty impressive accolades for a new, non-traditional style of whisky. 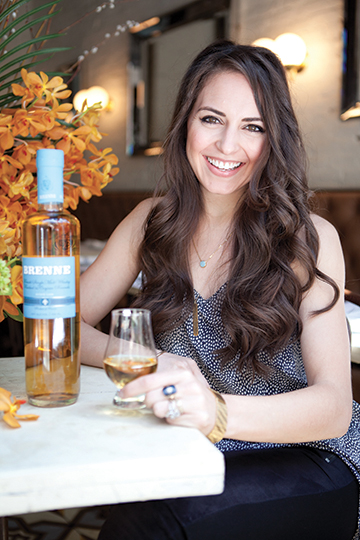 “You can’t lead by following,” says Allison Patel, Brenne’s creator and producer. That may be true, but following Allison along as she blazes new paths in the world of whisky would be a fascinating journey. Just following her blog, The Whisky Woman, might be a little easier but no less rewarding.

“I started this company when I found myself on a quest to seek out (and eventually create, as it happened) a single malt whisky from a non-traditional whisky-producing country that had a focus on terroir,” said Allison, when I asked her about how she came to create Brenne. “Being a female-owned whisky brand definitely sets me apart. Most people do not expect me to be the owner of a whisky company, but it’s not something I trade on because to me, gender has nothing to do with the quality of the spirit in your glass,” Allison added.

The success of Hendrick’s Gin, one of modern distilling’s most popular brands, is the result of a special duo of ladies. Ms. Lesley Gracie began experimenting with William Grant & Sons’ rare Carter-Head and Bennett stills in 1988, finally achieving a “peculiar sort of deliciousness” now known as Hendrick’s Gin, in 1999. The infusions of rose and cucumber, along with the brilliant idea of hiring the lovely and award-winning Brand Ambassador Charlotte Voisey to champion the unique spirit, have made Hendrick’s a “triumph of the unusual.”

But, has all this recent focus on women been meant as a celebration of their work or as a sort of segregation? I wondered, are there still gender biases?

“There are biases out there, but I have always tried to ignore them,” says Laura Cullen, national treasurer for the Unites States Bartenders’ Guild and VP, sales manager, On Premise for Pacific Wine & Spirits of Northern California. “It’s not healthy to give too much power to those undercurrents, although I do think that they exist and they are real. I do not feel that I have ever not been given an opportunity because I am a woman, nor do I think that being a woman has ever been a major factor in my career.”

“I do feel a responsibility to mentor and support women in our industry,” Cullen continues. “I’ve had a lot of people support me and help me navigate my career, and there’s no way that I would be here without that, but for the most part my mentors were not women simply because there weren’t a lot of women around. The two big exceptions to that are my mother and my sister, who are both incredibly strong, smart women. I think that giving back is a responsibility and an honor. If I can offer advice, tell a cautionary tale and in any way ease the minds of other women out there trying to find their way, I’m all in.”

“The spirits industry is ripe for the taking,” adds Ms. Ball. “We’ve seen it happen in the beer world and we will see it happen in the spirits world. I’ve learned that the spirits world is full of old-style thinking. I truly feel that the winners will be those who can outmaneuver the old guard thinkers. It’s impossible to build a brand the same way the big guys do, with their millions to spend on marketing, publicity and brand building. If we little guys are to succeed, we need to do it by creating a ground swell that is authentic and original.” 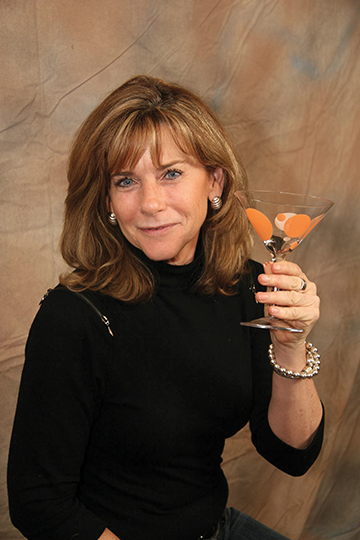 “It’s no longer just about selling the brands, it’s about selling the experience,” shares Donna Frederick, senior National Accounts manager for Beam Suntory. “People are looking for great cocktails and incredible food; they want an event with superb atmosphere. To be successful, you must learn as much as possible about the brand and trends, be passionate and believe in the products. Engage with one of the many women’s groups out there, like Whiskey and Women, and even consider getting some formal training,” Frederick advises. “We have one of the best jobs on the planet. I feel very lucky to be in this business.”

“I think what’s next for women in this industry is what’s happening now,” shares Lynn House, national ambassador for PAMA Liqueur. “We are finding each other. Women in the industry are being helped to find, encourage and support each other by groups like LUPEC (Ladies United for the Preservation of Endangered Cocktails), an organization that promotes women in the spirit industry while raising funds for local and national charities; and LOAD (Ladies of American Distilleries); and through events like Speed Rack, a bartender competition created by two amazing New York City bartenders, Ivy Mix and Lynnette Marrero, which shines a spotlight on female mixologists thriving behind bars around the country, while raising money for breast cancer research, education, and prevention.

“We are creating our own events, opening bars, forming consulting groups, developing spirits and running big brands. The opportunities ahead are endless,” exclaims House. “Women are having great success in the beverage industry. We are shattering that glass ceiling at a very rapid rate. Women are natural nurturers; we take care of each other. We grow in this industry together and we succeed together.”

So, Jim, Jack and Johnnie, shove over … there’s a lady coming!