Who is next to get hit by a lawsuit for claiming, “Handcrafted” or “Homemade?”

“With regard to Defendants’ false and misleading promotion of their bourbon. Defendants promote their bourbon as being “Handcrafted” when in fact Defendants’ bourbon is manufactured using mechanized and/or automated processes, resembling a modern day assembly line and involving little to no human supervision, assistance or Involvement, as demonstrated by photos and video footage of Defendants’ manufacturing process.”

If this statement is true—I would like to see the plaintiffs try to produce these high quality products. They would soon find out just how much craftsmanship and knowledge is needed. When will this stop? Aren’t there other problems in the country more important for these law firms to consider instead of a 43-page lawsuit against a product like Jim Beam White Label? Tito’s and Maker’s Mark are also having to fend off such accusations; personally I hope they make these legal groups waste their time and money. That’s my opinion.

Below is a recent article from Melita Kiely and The Spirit Business on the attempt to penalize Jim Beam for putting “Handcrafted” on their label, attacking their process and heritage.

A lawsuit has been filed against Jim Beam Brands alleging consumers are being duped by claims its Bourbon is “handcrafted” when it is made with “little to no” human involvement. 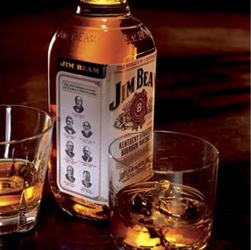 He argues Jim Beam’s labels call the whiskey handcrafted and its website says the process requires skilled craftsmen to create it.

However, according to the lawsuit, other information on the website, such as photos and videos of the production process, depict a mechanized process “resembling a modern day assembly line and involving little to no human supervision, assistance or involvement, as demonstrated by photos and video footage of Defendants’ manufacturing process”.

“There are no ‘skilled craftsmen’ involved in this manufacturing process”, the class action stated. “The use of mechanized and/or automated hammer mill is not equivalent to Defendants’ representation that Jim Beam Bourbon is ‘handcrafted’.”

“This claim is frivolous,” commented Clarkson Hine, spokesman for Beam Suntory. “We will defend our case vigorously and we are confident that we will prevail.

“Beyond that, as a matter of company policy, we don’t comment on the details of matters in litigation.”

This latest legal case is one in a long line of recent lawsuits alleging brands are misleading customers by claiming to be handcrafted and small batch.

Earlier this month, Angel’s Envy Rye whiskey also found itself in the midst of a lawsuit for allegedly claiming to be a small batch product when it is not.