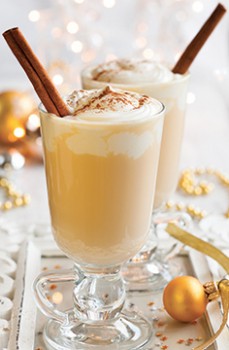 Combine evaporated milk, condensed milk, egg yolks and coconut cream in a large blender and blend until well combined. Add the rum, vanilla extract and ground cinnamon, and blend in. Drop in cinnamon sticks and vanilla bean, replace lid and refrigerate for at least two hours before serving.

Serve in small, chilled punch cup topped with ground cinnamon and a cinnamon stick. Will last refrigerated for up to a week.