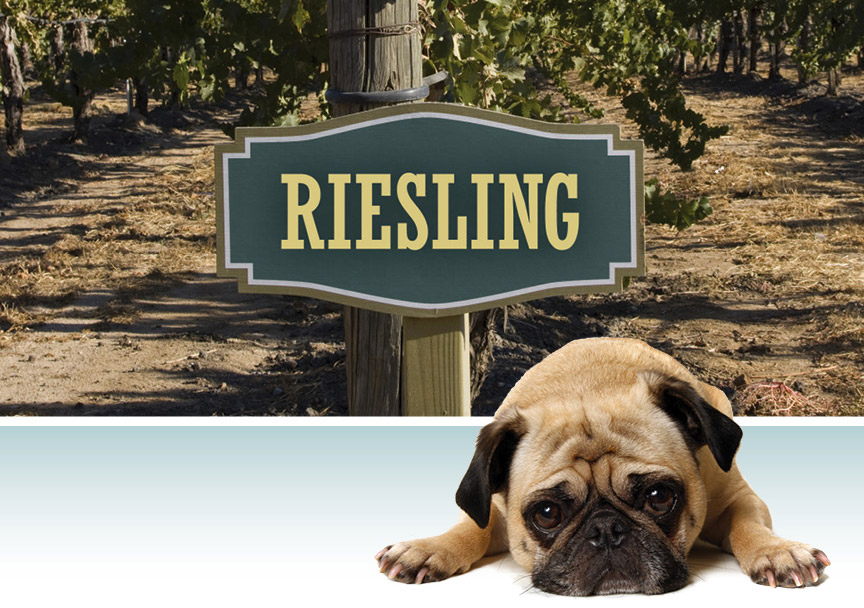 Poor Riesling, it’s like that sweet puppy in the pound that everyone agrees is cute but no one ever adopts.

Riesling has the affection of sommeliers and winemakers to be sure, but that love has a hard time crossing over to the consumer. This might possibly be the year of Riesling as various regions, including California, Oregon, New York, Alsace and Australia come into focus, bringing some fine choices to the conversation and increasing this orphan’s chances of finally becoming the wine everyone wants.

Here’s my lineup of this year’s most exciting Riesling regions.

The Finger Lakes region of New York State is actually the largest winemaking region in the eastern United States. During the hot summer months, the steady supply of cooling fog from the area’s deep-water lakes (some over 600 feet deep) significantly influences the near-ideal grape growing conditions while surrounding steep slopes provide perfect drainage for vines. There are currently over 100 wineries in the region experimenting with a range of varietals, but without exception the Rieslings reign supreme, exhibiting the classic profile of flawless acidity, minerality and juiciness. The world is starting to notice too, as the accolades come in a swift, steady stream from the likes of The New York Time’s critic, Eric Asimov, and magazines such as Wine Spectator.

Riesling was once more widely planted in California than Chardonnay, and that may come to pass again if winemakers such as Ted Bennett of Navarro Vineyards keep crafting such delicious examples. The cooler regions with longer growing seasons, such as Navarro’s Anderson Valley, are natural fit for this varietal. Santa Barbara winemakers have also been successful with Riesling. Even Napa winemakers, such as Charles Smith of Smith-Madrone, have been cultivating Riesling for decades. Overall, the California style tends toward spicier, richer wines with tropical notes.

Washington and Oregon have been home to some fabulous, well-priced versions of Riesling for many years. In fact in 2007, winemaker Randall Grahm’s Pacific Rim Winemakers built the first wine facility in Washington’s Red Mountain AVA completely dedicated to Riesling production (even crafting a sparkling version). Oregon wineries are taking advantage of the state’s cooler climate to craft crisp, elegant examples as well. In general, Rieslings from the Pacific Northwest tend toward a leaner, crisper style with stunning mineral notes and terrific food-pairing potential.

This enviable combination of east-facing mountains (which buffer the rains and keep the sky sunny), cooler temperatures, and mineral-rich soils gives Alsace the winemaking edge, making this region home to some of the world’s finest examples of Riesling. Having mastered the art of cultivating this varietal over the course of centuries, the winemakers here craft racy, bone-dry versions as masterfully as they craft rich, sweeter, more full-bodied wines. In general, the Alsace Rieslings tend toward the drier side, showing a beguiling contrast between tropical and mineral notes.

Clare Valley in South Australia is home to wonderful limestone-rich soils that yield some of the world’s most steely Rieslings. The area is at a relatively high elevation (around 1,500 feet) and enjoys cool nights to help retain grape acidity. Interestingly, this remote, quiet winemaking region also is known for Cabernet Sauvignon and Shiraz. Eden Valley, also in South Australia, produces more perfumy Riesling, but one almost equally matched in acidity and minerality.