Super vodkas are a breed apart. The meticulous distilling methods used give us some of the purest clear spirits in the world. Each has its own personality and flavor derived from its locality, but what they all have in common is super quality. Here is a list of 10, with the methods and ingredients each uses.

Hangar 1 Vodka is, well, made in an airplane hangar in Alameda, California. It is made from grapes and craft distilled by hand in small batches using just-picked fruit – the skin, stems, seeds, leaves and all. Then a Viognier eau de vie with spirit made from midwestern wheat is blended in to make a perfectly balanced, fruity, “straight” vodka. Hangar 1’s flavored vodkas are all made with fruit eau de vies made in the old-world style and tradition. Truly a unique product!

Square One Vodka is USDA Certified organic rye vodka, made from 100 percent organic American rye without the use of genetically modified yeasts, chemical additives or synthetic de-foaming agents. Square One draws its water from deep aquifers originating in the Teton Mountain Range of Wyoming. The liquid is derived from a single, four-column continuous still and filtered only once, through a micron paper filter. The result? A clear and silky vodka with rich rye flavors.

Tigre Blanc is a super-premium vodka made from 100 percent French wheat and locally-sourced spring water. Tigre Blanc is handcrafted in the Cognac region of France in the same small alembic stills used to produce Cognac. Its round, smooth flavor and well-balanced texture are characteristic of the Cognac terroir. Henri de Belleville, a Frenchman raised in the hills of Champagne, was inspired to create Tigre Blanc vodka by his dual passions for spirits and ancient Taoism.
The Tigre Blanc recipe has been passed down through Belleville’s family for generations, and the distinctive bottle reflects the brand’s artistry and heritage. Belleville’s interest in Asian and Indian art and culture led to a partnership with the Panthera organization, and a portion of the profits from the sale of each bottle of Tigre Blanc helps fund tiger conservation efforts. 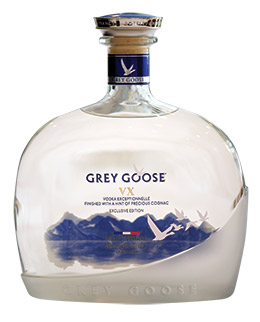 Grey Goose VX is produced by Maître de Chai François Thibault, just as is the super-premium vodka, Grey Goose. VX is 95 percent Grey Goose and 5 percent young Cognac. In an interview with François in our Fall 2014 issue, I asked him what Cognac he uses and why.

“I had two options, old or young. Old would have full flavor, great tannin, complexity; or, something that has not been aged long. It would be better, with a delicate white spirit like Grey Goose, to marry it with something young, with something that has a closer aspect to a white spirit, so I went for a young Cognac. Young Cognac does not have the aging aspects of aged Cognacs. It would be a little more floral and light.” He goes on to say, “I oversee all aspects of the Cognac used. I’m really trying to express the terroir and the central notes of the Cognac, which I like to call the ‘spring’ notes. Very floral, a sense of freshness and a very light stone fruit, white fruit, peach, apricots, very light touch of acacia. Like a woman – very delicate, with a sense of freshness.”

I asked François if there is a specific age cut-off before it becomes too bold in color and flavor. “Yes, between one and never more than two years old. We use very old barrels so they won’t express their stringent effects into the Cognac. As close to crystal clear as possible.”

A truly exceptional product in one of the most beautiful bottles made.

The Reyka distillery, Iceland’s first distillery, is located in Borgarnes, Iceland. Located 74 kilometers (approximately 46 miles) outside of Reykjavik, this coastal village is removed from industrial life and surrounded by wonderful natural resources. To help paint a picture of how untouched the resources are here, consider this: The CO2 levels in Borgarnes are actually falling. Seriously, the air is that clean.

The distillery’s water is sourced from an Artic spring that runs through a 4,000-year-old lava field, making it some of the purest in the world. Their filtration system also uses lava rock – an amazingly effective system. The spirit is distilled in a Carter-Head still, reportedly one of only six in the world. The copper still gives it an unparalleled purity with just one distillation. Each distillation takes up to six hours and yields just 255 cases, a true small-batch vodka! And all this is done while being powered by geothermal energy from volcanoes. 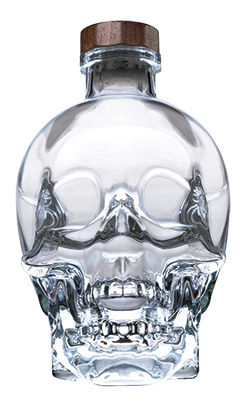 Crystal Head is the creation of actor Dan Aykroyd and artist John Alexander. The vodka is additive-free, which was the goal of the two creators who started the project in 2007. By 2008, they were sold out in four states and needed to ramp up production. By 2009, they were available almost everywhere. The super-premium vodka is made from the finest peaches and cream corn, distilled four times, filtered seven times with the final three going through Herkimer diamond crystals. The unique bottle was designed by co-owner John Alexander and is produced in Italy by the famous glassmaker, Bruni Glass.

Why model after the famous crystal skull, as in the legend of the 13 crystal skulls? Pure fascination with their spiritual powers and metaphysical properties. (See more about this in the interview with Dan Aykroyd in this issue).

Belvedere Vodka hails from the small town of Zyrardów, in the Mazovian plains of central Poland, where it is crafted in a 100-year-old distillery. Belvedere, which means “beautiful to see,” is named after the Belweder Palace in Warsaw, home of the Polish president. An illustration of the palace appears on every bottle.

Belvedere uses Dankowskie rye from the Mazovian plains of Poland and water from its own proprietary wells to create this luxury vodka.

Belvedere, the luxury vodka brand owned by the LVMH Group, is partnering with the next movie in the James Bond franchise, “Spectre.” Harnessing Bond’s penchant for vodka martinis and his iconic “shaken, not stirred” line, Belvedere becomes the official vodka of the movie, which is due for cinematic release next November from Sony Pictures Entertainment. (Source: Business Insider)

“Spectre” will be the 24th James Bond film produced by Eon Productions. It will be the second film in the series directed by Sam Mendes, and will feature Daniel Craig in his fourth performance as James Bond and Christoph Waltz as Franz Oberhauser.

ELYX is manually distilled in a 1921 copper rectification still known as Column 51, made entirely of copper. It is operated by a select few who inherited their knowledge and expertise, which has been passed down through generations of Swedish vodka-makers. Krister Asplund and his team control the distillation by hand; every handle, knob and level is adjusted manually. The copper naturally catalyzes trace compounds in the spirit, purifying the vodka and adding a highly prized silky texture and taste.

ELYX is made in Åhus, Sweden, exclusively from single estate wheat from the Råbelöf Castle, where they have been producing wheat since the 1400s. From seed to bottle, everything is done within a 15-mile radius of the distillery, ensuring quality control and perfection in every detail.

elit is the product of centuries of vodka tradition. The process of creating elit starts in Tambov, Russia, with their single source of grain they own and tend to themselves. They hand select an exact blend of winter wheat, spring wheat and rye. After the spirit is balanced with water from their artesian well, it is chilled to exactly 15 degrees centigrade, no more, no less. It then cascades through precisely packed columns of quartz sand and Russian birch wood charcoal, pulled by gravity and purified by carbon.

The final stage is a traditional Russian technique of leaving the casks of vodka outside in plummeting winter conditions so that impurities freeze to the cask walls. This craft has been perfected by Stolichnaya and during the freeze, the vodka is chilled to precisely -18 degrees centigrade so the final molecules of impurities bind together, enhancing the effect of ion-charged filters.

After the creation, it is rested to ambient temperature and bottled under a guarded line, ensuring that every bottle is perfect.

Saint Petersburg is located in the vicinity of Lake Ladoga, which contains soft water with very few impurities, perfectly suited for use in vodka. The giant granite basin was formed by glaciers during the last Ice Age shifts.

Russian Standard vodka specialists have developed a unique distillation process by which the naturally sensuous character of the spirit is maintained and, at the same time, impurities are filtered out. Under constant control, the vodka passes over 200 distillation stages.

Their filtration process includes Russian birch charcoal along with quartz from the Ural Mountains. They also use silver, a very effective antimicrobial agent, to refine the vodka even further.

The vodka then goes through a final, unique process called “relaxation,” a costly and time-consuming process in which the liquid matures and the ingredients can be combined with each other. This results in the perfect balance, softness and the final development of the organoleptic properties.