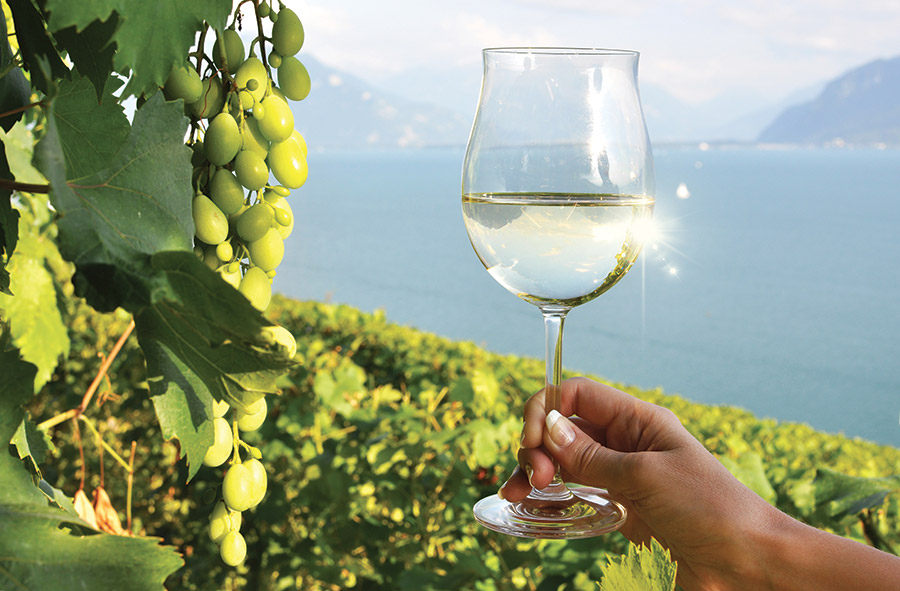 This article is a little different in the sense that it suggests that wines made from grapes grown in fairly high altitude, no matter the region, have a different personality from those in neighboring, lower-lying areas even if within the same appellation. Altitude might be an interesting way to market your wines by capturing customers’ attention using a different angle, one that possibly might enhance sales. It certainly provides a different way of organizing a wine list because the wine styles vary so much in this category that the only unifying factor is the altitude at which their grapes were grown.

There isn’t any single consensus as to what defines “high altitude.” Is it 1,000 feet above sea level? We know for every 330 feet in altitude, the temperature drops by 1.1 degree Fahrenheit. The substantial differences that come with altitude include not only the cooler temperature but also that the swings between daytime highs and nighttime lows are greater. It’s not uncommon to have a 50-degree Fahrenheit diurnal temperature swing, thereby allowing grapes to maintain their acidity. So while that marker of 1,000 feet is a bit arbitrary, it is a good starting point.

The vines at that elevation or higher are in closer proximity to the sun, which results in increased intensity of light, increased strength of UV rays and cooler overall temperatures; and with those areas’ rockier, less nutrient-rich soils, more limited water sources. All of these factors can cause more stressed vines, which place their excess energy into smaller-sized grapes. The grapes form thicker skins and riper pips, creating not only riper tannins but also more developed phenolics, structure and flavor persistence. There may be health benefits from consuming such wines, as their concentration of resveratrol and quercetins are higher. The negatives for attempting to grow in such environments include lack of infrastructure, greater labor costs, risks from frost, heavy rains and in some locations, hail. The reduced fungal and pest pressures mitigate some of those costs.

We begin by examining California, the most dominant wine state in the U.S., even though Colorado’s entire wine growing region would fall under this category of “high altitude.” The latter’s wine industry is still somewhat in infancy and unavailable to the broader market. In contrast, less than three percent of the total wine production in California comes from high altitude wine regions.

In the North Coast region of California, much of Lake County is elevated. Red Hills AVA, as an example, is located in the northern Mayacamas Mountains and averages between 1,350 and 2,600 feet above sea level, though the majority of vineyards are more than 2,000 feet above sea level. The famed Napa grower, Andy Beckstoffer, has invested in vineyards in Red Hills with its obsidian volcanic soils. The noted Bordelais Denis Malbec of Château Latour fame produces Aliénor Wines, and Stéphane Derenoncourt has been making Cabernet Sauvignon wines for nearly a decade. This appellation has noted wineries such as Obsidian Ridge Vineyards, Sol Rouge Estate, Hawk and Horse Vineyards and Norby and Steele, all of which produce rich, structured Cabernet Sauvignon with black fruit and spice notes. Sauvignon Blanc also does very well in this climate and is a source of wines for many top Napa Valley producers for their North Coast labels. Wines from Fortress and Vigilance show more ripe melon, with citrusy lime notes and stony minerality, without the characteristic methoxypyrazine flavors of bell pepper.

Perhaps it is not coincidental that a high proportion of award-winning wines from the Napa Valley AVA comes from its mountain appellations such as Diamond Mountain, Spring Mountain, Mount Vedeer and Howell Mountain. Elevations reach over 2,000 feet for many of these AVAs, and their wines reveal rich, voluptuous flavor intensity with fully developed tannins. Many of these vineyard sites are above the fog line so receive more sunlight, but their elevation provides the diurnal range and cool temperatures that allow the grapes to fully ripen while maintaining balance. Notable producers such as Diamond Creek, Dyer, Hall and Von Strasser, to name but a few from Diamond Mountain AVA, are world renown. Arkenstone, La Jota, Nickel & Nickel and Sbragia all produce wonderfully balanced but powerful Cabernet Sauvignons from Howell Mountain AVA.

From the Mount Vedeer AVA, Hess Collection and Mount Brave both produce some of the country’s most stunning Malbecs, while Trinchero’s Cloud’s Nest Vineyard Cabernet Sauvignon reveals a powerful but firmly tannic wine that will age for at least a decade. Spring Mountain AVA is represented by the likes of Vineyard 7 & 8, Terra Valentine, Barnett, Smith-Madrone and Spring Mountain Vineyard, whose Cabernet Sauvignon a knowledgeable wine consumer will find equally stunning and complex.

Santa Cruz Mountains is home to one of the country’s iconic producers, Paul Draper of Ridge. Who cannot be impressed by his iconic Monte Bello’s Bordeaux blend? The vineyards extend to 2,700 feet above sea level, and it is no coincidence that they represent the quality factors of elevation previously described.

Traveling further south to Monterey County’s Santa Lucia Highlands, we find the same influences present but given the cooler

climate, Pinot Noir and Chardonnay predominate. This AVA’s initial plantings in modern times only date back to the 1970s, with Paraiso, Sleepy Hollow, La Estancia and Nicky Hahn of Smith & Hook taking the lead. Today, we know the names of Pisoni, McIntyre, Hahn, Morgan, Bernardus, Siduri and many more, for their ripe but balanced expressions of Pinot Noir and Chardonnay.

Europe also has many quality high altitude growing regions such as the Alto Adige in northeast Italy, with its stunning international varietal whites – yes, including Pinot Grigio and its potentially delicious savory indigenous red wines especially made from Lagrein, by such producers as Elena Walch or at the higher end, Thurnhof and Castel Feder. Similarly, one might find the

same intriguing profiles of wines in the Alpine regions of Italy’s smallest region, Valle d’Aosta, or the Jura in France. The red wines are paler and have an acidic raciness to cleanse the palate after indulging in fatty foods, such as a fondue or risotto flavored by real fontina cheese as favored by locals. The wines are made from obscure varieties such as Cornalin, Freisa, Fumin and a grape known as Petit Rouge. I recently had a wine from the Torrette sub-appellation of Valle d’Aosta and found its delicious bright red fruit and floral character was balanced by an intriguing earthiness. It was sublime with charcuterie, cutting straight through the fat and cleansing the palate between each bite. Similarly, the wines of the Jura, such as Jacques Puffeney’s Poulsard, have the appearance of a rosé but the taste intensity of a red wine with surprisingly firm tannins. The white Savagnin, from which the Jura’s famous sherry-like “vin jaune” is made, reflects a style of oxidative wine that is mineral and tart at its core, with a very long-lasting impression. Italy certainly has other high altitude vineyards close to the Dolomite Mountains in the northeast. Its highest vineyards are on Mount Etna in Sicily, at 3,000 feet in elevation, which I wrote about in a recent in the Mix article. 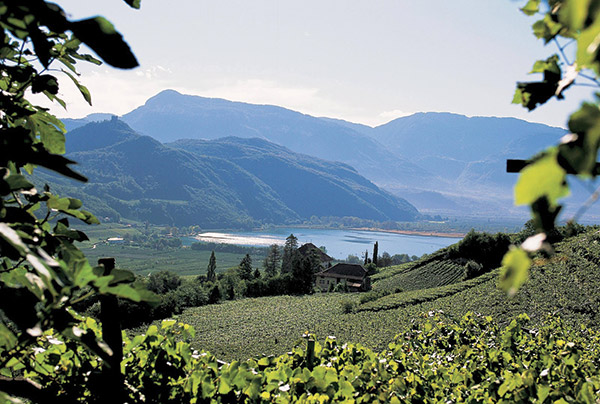 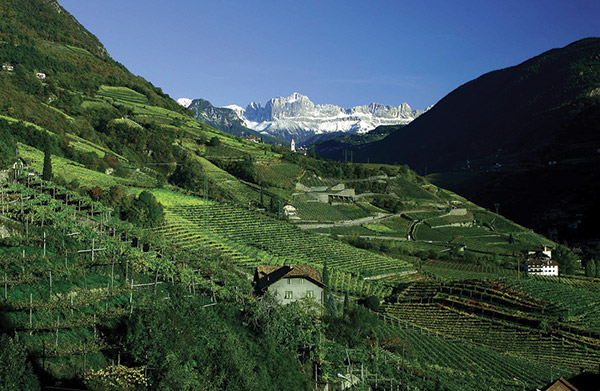 My focus now includes Greece, the most mountainous country of Europe. The Peloponnese of southern Greece has vineyards on its high plateau, at 2,000 feet above sea level in the appellation of Mantinia. The appellation is famous for its floral and racy Moschofilero, which is readily accessible from producers such as Boutari and Domaine Skouros. The PDO appellation of Nemea (of Hercules fame) in the peninsula’s northeastern area has an elevation of over 1,000 feet. This region is famous for its difficult-to-pronounce red varietal, Agiorgitiko (pr. Ah-your-gee-tee-ko). It is sometimes marketed in its friendlier English translation of “St. George.” This is a unique varietal with deep color and a rich plummy nose that has savory and earthy undertones. Its acidity and bracing tannins make for a long lasting wine. Producers such as Gaia and Domaine Skouros reflect the wine’s potential. Try it with grilled or roasted lamb dishes; it is an inexpensive way to have a Greek experience.

Another mountainous region in Greece is the region of Epirus, on the slopes of Mount Pindus in central western Greece, by the Ionian Sea. The Katogi-Strofilia winery in Metsovo, which I had the pleasure of visiting some years ago, has a 60-year history of Cabernet Sauvignon. Its Averoff Estate is a beautiful example of power and elegance that reinforces the role that altitude seems to play.

None of the aforementioned regions comes close to the Argentinian definition of high altitude wines. Mendoza typically has vineyards at over 3,000 feet above sea level. But it is the vineyards of the Upper Calchaquí Valley of Salta that might be defined as being in an extreme altitude wine region. There is a vineyard recorded at 9,849 feet above sea level called Altura Maxima, which is owned by Hess Family Estates and is producing wines under the Colomé brand. It is currently the highest vineyard in the world. The winery produces Argentina’s signature wines – Torrontés and Malbec – and reflects the points made in the preceding paragraphs. The Torrontés has both balance and intensity, alcohol and acidity, fruitiness and minerality; this wine is representative of much of Salta’s and Cafayate’s varietal expression. The Malbec is almost black and concentrated, powerful yet refined, and is made from old vines, some of which are over 100 years of age. There are many highly acclaimed producers and

none more so than Catena, who recognized the potential for quality in high altitude vineyard source wines and how special they could be. A recent experience with Bodega Catena Zapata’s Alta Chardonnay provided the inspiration for this article. Its purity of stone and citrus fruit, stoniness, balance of acidity and alcohol almost belied the new oak barrique-aging treatment. It was so seamless and integrated, refined and yet powerful; all that led me to conclude that elevation was more of a key factor than I had previously considered. Perhaps it is time for more of us to seek such examples for our customers and fellow wine drinkers. 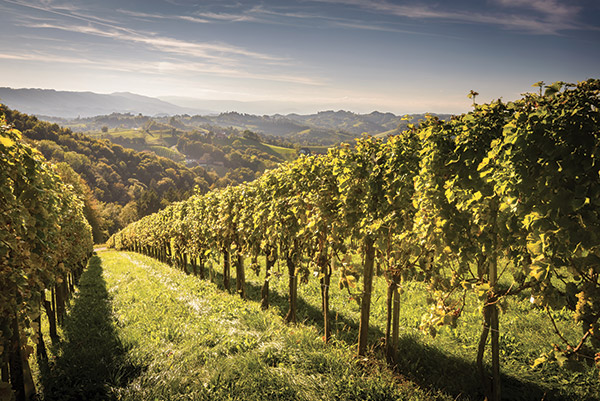