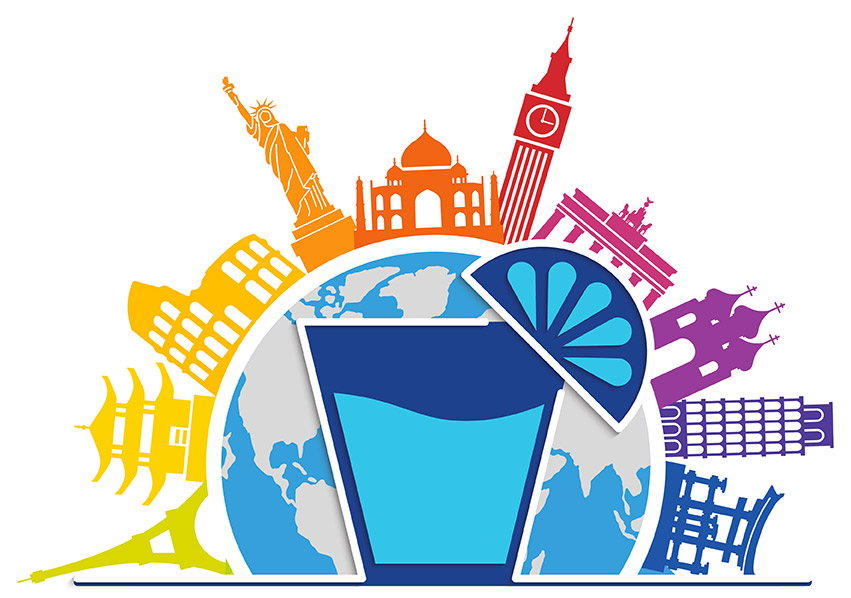 In today’s global, always-connected, food-driven culture, it can be hard to surprise consumers. Foodies often feel like they have seen and done it all – what’s left to discover? And yet, still only a small percentage of international ingredients and flavors have cracked the U.S. market. Few consumers have heard of spirits like poitín, horilka and kvass. But these types of global ingredients are exactly what restaurants and bars are seeking out, trying to discover the next hot cuisine or flavor.

In fact, the drink menu has long been one of the most international parts of any menu, being home to Irish whiskeys, Mexican tequilas, Russian vodkas and cocktails like Italian Bellinis and Spanish sangrias. This makes the drink menu a natural for “next level” flavors – the types of innovative, lesser-known spirits that on-trend bartenders are seeking out to set themselves apart, yet with relatable elements that make them less of a leap for the consumer. Let’s take a trip around the world to discover innovative spirits that can freshen up any drink program.

In recent years, spirits from Mexico and Latin America (beyond the well-known tequilas and rums) have been particularly successful in making the leap to U.S. menus, due both to the regions’ proximity to the United States and the popularity of Latin flavors on American menus. Spirits like pisco, essential to the pisco sour, and cachaça, the main ingredient in the caipirinha, have already made inroads on drink menus in this country.  According to a last year’s issue of Datassential’s World Bites publication covering Brazil, over a third of U.S. consumers want to try a caipirinha at a restaurant.

And now bartenders and drink program managers are seeking out even lesser-known flavors, like sotol, distilled from the wild desert spoon plant in northern Mexico, which takes 12-15 years to mature. Produced in the same manner as tequila and mezcal, sotol’s flavor is often described as smoky, fruity and grassy. At The Original Ninfa’s, in Houston, Texas, it’s used in place of tequila in the Sotol Margarita, with Hacienda de Chihuahua sotol plata, fresh lime juice and guava.

A number of lesser-known European spirits can help take already-popular drink options to the next level. Ireland’s poitín (pronounced “poteen” or “pocheen”) is often called “Irish moonshine,” putting it at the intersection of two hot drink trends – whiskey and moonshine. In fact, poitín was illegal to produce in Ireland until 1997. Now that the ban has been lifted, a number of whiskey distillers produce premium versions of this clear spirit, which goes into drinks like the Proper Prairie at New York’s Rotisserie Georgette, which combines Dickel white corn whisky, poitín, Cocchi Americano and celery bitters.

French Cognac, meanwhile, can be found on 44 percent more drink menus compared to four years ago, according to Datassential’s MenuTrends. Yet Armagnac, which predates Cognac by about 200 years, is far less ubiquitous even though it is distilled from the same grapes and is also aged in oak barrels. But with its similarities to Cognac, lower price point and fuller flavor, Armagnac is often described as a spirit that Americans should be drinking. The same could be said for calvados, the apple brandy distilled from apple cider in France’s Lower Normandy region. Hard ciders have grown 700 percent on drink menus in the past four years, and oak-aged calvados could translate hard cider’s popularity to the cocktail menu.

The Netherlands and Eastern Europe

Recently, a number of publications have celebrated a gin revival as the next spirit trend; in fact, gin is up 61 percent on drink menus over four years ago. Yet far fewer consumers are familiar with jenever, a precursor to gin that also owes its flavor to the juniper berry. Jenever is produced in “oude” (old) or “jonge” (young) varieties, though these names refer to whether traditional or modern distilling techniques are used, not the age of the spirit. Yet those distilling methods are still said to have an effect on the flavor: Old jenever is often described as smokier and maltier, while young jenever has a cleaner, lighter flavor.

In the U.S., spicy flavors from around the world (sriracha, harissa) have been taking over menus, and the cocktail menu is no exception. Hot flavors like cayenne, chipotle, serrano, chili and habanero have all seen double-digit growth on cocktail menus in the past year. But Ukraine has been far ahead of this trend: Honey and red pepper is a classic flavor combination in horilka, often called “Ukrainian vodka.” In fact, honey is also one of the top-growing flavors on cocktail menus, up 25 percent in the past year.

While almost every spirit-maker is trying to break into the Chinese market, Chinese baijiu producers have been working to expand overseas, particularly in the U.S. This grain-based, high-proof spirit (with a reputation for being an acquired taste) is widely considered to be the most consumed spirit in the world, and is available in a variety of strengths and flavors. At San Francisco’s Chino, the Chinatown Iced Tea combines baijiu with almond milk, passion fruit, Lipton tea and lemon. And while baijiu may be the most consumed spirit in the world, South Korea’s Jinro Soju regularly tops Drinks International’s list of the top-selling spirit brands in the world. In fact, more than 3 billion bottles of this rice-distilled, slightly sweet spirit are sold in South Korea each year. The low alcohol content has helped soju make inroads in the U.S., where it is often a go-to choice for restaurants without a full liquor license. Coupled with the rise in popularity of Korean BBQ and fusion cuisine, soju is up 38 percent on drink menus in the past year.

In Russia, kvass is a similarly low alcohol drink. In fact, it straddles the line between beer and soda, with an alcohol content that typically falls between 0.5% and 2.2%, and it’s often sold to all ages from trucks and street vendors in Russia. The strong, sour, fizzy beverage is fermented from grains or bread (often rye bread), which is combined with fruit or herbal flavorings. A number of U.S. producers have created their own versions, buoyed by the success of kombucha – Coca-Cola even began selling its own version in the New York market in 2010. North Hollywood, California’s Talisman makes its own house-made kvass, described as a “traditional Russian soft drink.”

This is just a small taste of the lesser-known global spirits that can spice up a drink menu. Look out for spirits like Bolivian singani, Swedish bäsk, slivovitz from Central and Eastern Europe, kumis from Central Asia and Japanese shochu, to name just a few. These innovative, unusual global flavors can surprise and excite consumers all over again. If you really want to wake up their taste buds, try Hungarian pálinka, which The New York Times described as a “slap in the face.”

This article has been provided by Maeve Webster, senior director, and Mike Kostyo, publications manager, of Datassential, a leading consulting firm and supplier of trends, analysis and concept testing for the food industry.