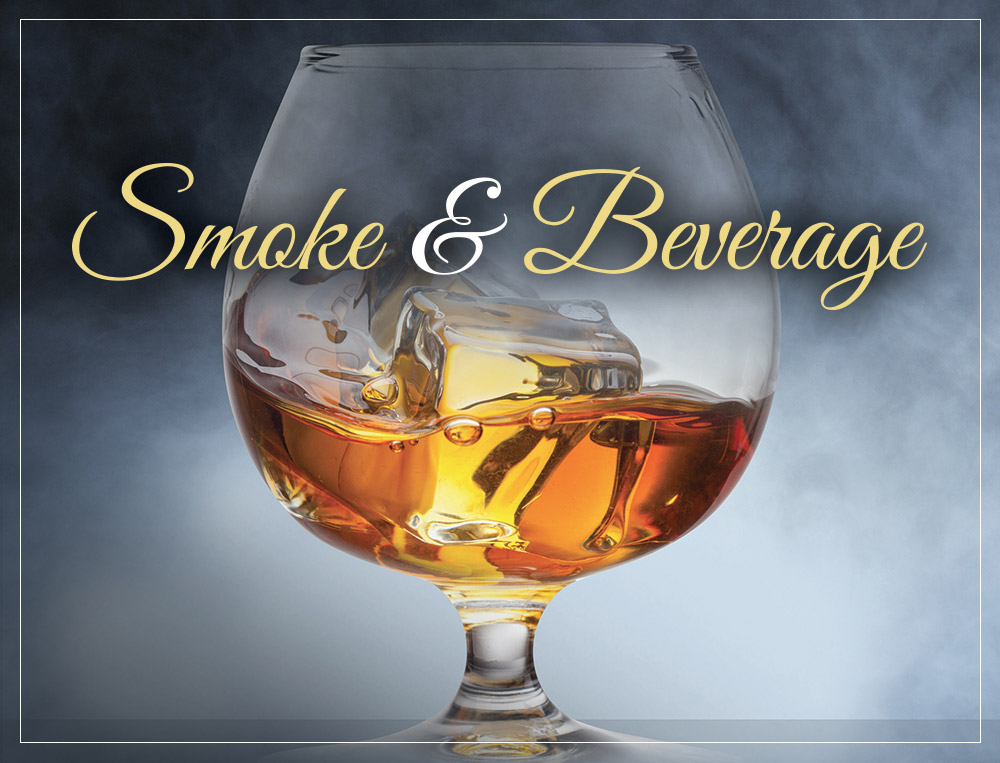 “Smoke & Beverage” may not be a catchy title, but I had to avoid the obvious puns. Well-written articles and blogs related to the topic have carried titles like “Scorch & Soda,” “Smoke Gets in Your Ice” (my favorite), and “Smoke Signals.” I had been working with “Served Up – In Smoke” until I realized its misleading potential. 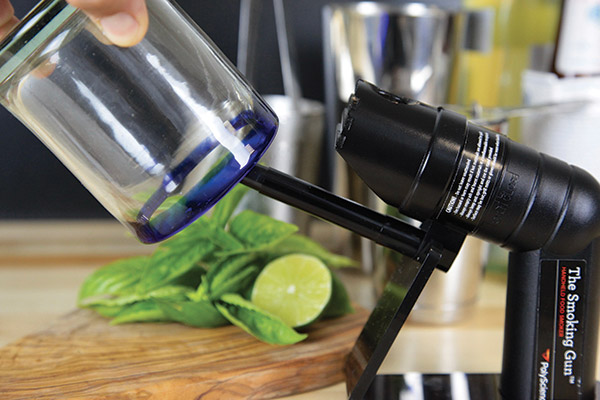 Smoky beverages have been around for centuries. German smoked beer, or Rauchbier, dates from the 16th century. And the smoky black tea of China, Lapsang Souchong, was first created in the 17th century. Mezcal, too, has been made since the 17th century. Peaty Scotches were produced in Islay in the early 19th century.

In the 21st century, on the heels of the barbecue and bacon stampede, we’ve figured out how to add smoke directly – to a finished cocktail, to a cocktail’s ingredients, or even to a cocktail’s ice.

Some of the cocktail-smoking techniques evolved as molecular gastronomy methods peeked around the kitchen door, saw the bar and headed straight for it. For example, the PolyScience Smoking Gun, used widely by bartenders to infuse smoke into their cocktails or cocktail ingredients, was invented at the request of Grant Achatz of Chicago’s Alinea restaurant.

PolyScience’s CEO and “inventor to the chefs” Philip Preston, told Food & Wine’s Oliver Schwaner-Albright in a July 2008 interview, that the original “gun” was a modified battery-operated computer keyboard cleaner that he created for a joke. Demand forced him into production.

But it doesn’t take a Smoking Gun to create ice with embedded smoke. The common method for accomplishing that is to place a block of ice in a covered wood smoker and let it melt. Make sure the ice is sitting on a vessel that will collect the smoky water, which can then be made into cubes. This works because, well, smoke loves ice. Maybe it’s not exactly love, but there’s clearly an attraction. The attraction is a phenomenon known as thermophoretic force, which means that the smoke will settle on cold surfaces before it will settle on hotter surfaces.

While beverage smoking trends and techniques are well documented, I wanted to explore what is behind the trend. What is smoke, anyway? Is it a flavor, or what? And why do we like it so much (when part of a balanced drink)? Is it that caveman thing? 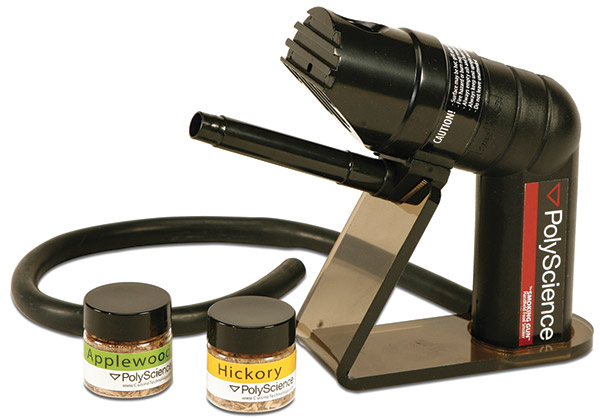 Smoke has been used for pest control, as a weapon, to mark a ritual and, of course, to enhance the flavor and texture of certain foods and beverages.

Smoke is complicated. Technically, smoke occurs as a result of incomplete combustion. It’s part solid particles (in an aerosol format), part liquid (tiny droplets) and part gas (vaporized chemicals). The vaporized chemicals are a small part of the smoke components but account for nearly all of smoke’s “flavors.” And the flavors will differ depending on its solid fuel type and the combustion conditions. Flavor intensity will be governed by the quantity of smoke, the surface size of the subject and the length of time of the exposure.

Wow. Consider this: Smoke, as an ingredient, is replete with variables and must be made from scratch by the bartender. Achieving a well-balanced drink using smoke – consistently – is a tribute to the skill and dedication of the talented bartenders who pull it off.

Is Smoke a Flavor? 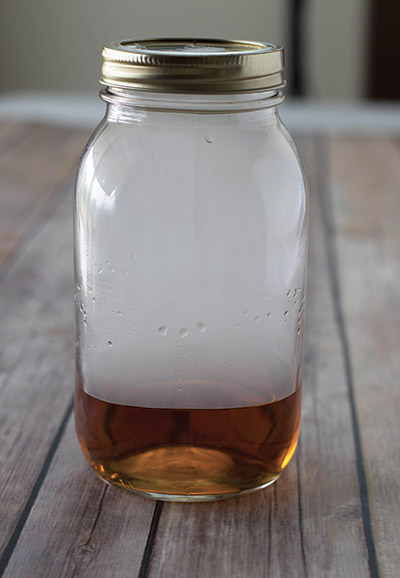 Considering the composition of smoke, the right answer might be that it’s a compilation of flavors. It’s almost like asking if red wine is a flavor. Most of us can answer that easily: Red wine is a complex category embracing many products with multiple flavors, and no two red wines ever taste exactly the same.

Flavor is a result of taste, physical stimulation (like texture or the burn of a spicy food) and smell. You’ll recall that taste occurs when receptors on the tongue react to salty, sweet, sour, bitter and umami. It has been suggested that smoke may be a sixth taste. While this resonates, science tells us that there are no tongue receptors for smoke; so, really, it’s not an element of taste.

Regardless, in the case of smoke, smell is the prime contributor to flavor.

Fire exists in nature and therefore has been around longer than we have. Beyond that, there is no consensus. Man has been able to control fire for a couple of hundred thousand years, or maybe a half million years. But we only learned to cook with it “recently,” between 12,000 and 125,000 years ago, depending upon whom you ask.

“Of the three elements of flavor, it’s smell that rocks our dawn-of-man world,” said columnist Jim Shahin, writing in The Washington Post in May 2014. “That’s because the sense is lodged in an ancient part of the brain called the limbic system, which houses emotion and long-term memory. Smells trigger personal memories as well as atavistic, or ancestral, ones.” 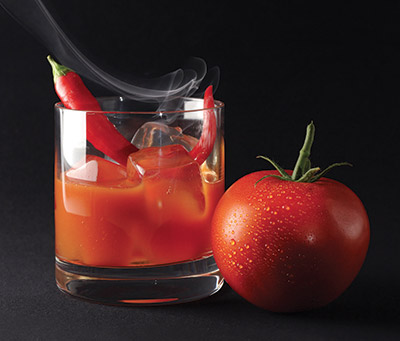 Given the challenges presented by the use of smoke in a cocktail – balance and consistency – one might conclude that sticking to smoky beverages like an Islay Scotch or mezcal, or perhaps even using liquid smoke, is the way to go.

But let’s not throw the baby out with the (smoky) bath water. The best way to achieve the balance you want with consistency is probably to smoke the ingredients instead of the drink itself. As for smoking the cocktail directly, smoke in the bar can make for a great show, but may not appeal to all of the patrons.

Let’s start with ice, the cocktail ingredient used more than any other. A popular method, letting ice melt slowly in a wood smoker and re-freezing the now smoky water, was mentioned earlier. Smoked cubes have been used in every drink you might imagine, though not always successfully. Positive results have been reported to enhance whiskey-based drinks and non-whiskey drinks such as the Bloody Mary, the Negroni, the Daiquiri and many more.

As for other ingredients, the bartender’s imagination is the only limitation. Smoking examples include simple syrup, or cola syrup for a Jack & Cola or Cuba Libra. Smoke has been infused into white and red wine, beer, coffee, tequila, Scotch, milk, Muscat, hot chocolate and more – though not always with a successful result.

“Smoke & Beverage” may not be a catchy title, but the combination is here to stay.