George decided he wanted to go see the Vietnam Veterans Memorial wall. It had been several years since he had visited the nation’s capital and he always loved springtime in Washington, D.C. After arriving and checking into his hotel, George realized that he was in the city where one of his favorite chefs, José Andrés, operated several restaurants. As it turned out, José had recently opened a new Peruvian restaurant called China Chilcano, so George decided that would be his dinner destination. Being very familiar with some of the chef’s other establishments, such as Jaleo and China Poblano, George was very excited to experience José’s latest endeavor. He arrived fairly early, yet the bar was already filling up with D.C.’s after-work crowd. He secured a seat at the bar and was immediately greeted by the attentive woman behind the stick.

“Hi! My name is Mayu. What can I get for you?” she inquired.

George replied, “Well, it’s my first time here. What should I drink?”

“You have to try a Chilcano. It’s a classic Peruvian drink made of pisco, fresh lime, Amargo Chuncho bitters and ginger ale. We even named the restaurant after it!”

“Sounds delicious,” he declared, “and I’ll also take a look at a food menu please.” 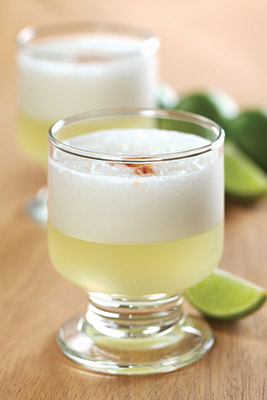 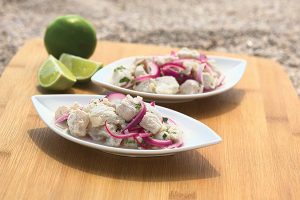 As Mayu fixed his drink, George perused the dinner menu and was intrigued by the multicultural fusing of Peru, China and Japan. He settled on the Ceviche Clasico La Mar to start, followed by a salad consisting of hearts of palm and fried plantain, called Ensalada de Chonta. For his entrée, he went with what was touted as “Peru’s most precious dish,” Aji de Gallina – chicken stew served in a spicy, nutty cheese sauce.

“Here’s your Chilcano, and since it’s your first visit, I took the liberty of ordering you some fried plantain chips with Salsa Criolla. Enjoy.”

George found the Chilcano to be cool and refreshing, with a perfect balance of sweet and tart supporting the floral notes of the pisco and the unusual spice of the Amargo Chuncho bitters. The drink also happened to go wonderfully with the fried plantain chips.

“Amazing!” he declared, as he placed his dinner order.

“That’s a lot of food; can I make you another Chilcano or maybe a Pisco Sour?” she solicited.

“Never had a Pisco Sour before; sounds interesting. I’ll try one,” George pronounced.

As the meal began, George soon realized that he had indeed ordered a lot of food, but it was so good he couldn’t seem to stop eating. One Pisco Sour turned into three, as he took the last bite of his Aji de Gallina.

“Sure. These are wonderful, almost like drinking a cloud,” he answered quickly. “How do you make them?”

“We use Macchu Pisco, fresh lime, sugar, egg whites and the Amargo Chuncho bitters,” Mayu explained. “The woman who makes Macchu Pisco, Melanie Asher, is sitting at the end of the bar, if you would like to meet her.”

“I would love that,” declared George, “but please send her a Pisco Sour from me first.” 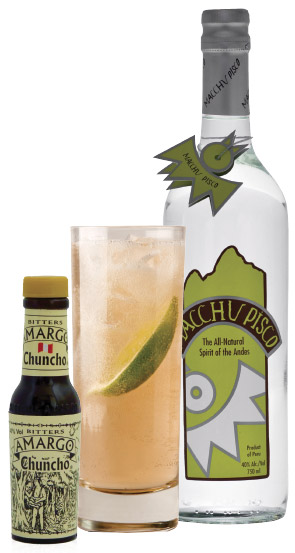 Mayu led George to the end of the bar and introduced him to Melanie, who invited him to join her.

“So I must say, I have fallen in love tonight with the Pisco Sour and it is such a treat to meet the young lady who makes this fantastic pisco,” he declared.

“Thank you so much for your kind words. The Pisco Sour is the national drink of Peru and a true celebration of the Peruvian culture and people,” she explained. “If you really want to learn about the magic that is pisco, I’m taking a group of bartenders from Portland to Peru next week – I think you should join us.”

Well, George did not need to be asked twice. He exchanged contact information with Melanie, thanked Mayu for a wonderful evening, and left with visions racing through his mind of his upcoming adventure to discover the wonders of Peruvian pisco.

Less than a week later, George landed in Lima, Peru where he met Melanie and a group of bartenders from Portland. Getting in late, they headed straight to the hotel, as tomorrow’s trip would begin early. The next morning they all loaded up in a coach that would be their transport for the next several days. First stop on the journey was Canete, a town which is part of the Lima region, to harvest the Italia grapes used to make Nusta mosto verde pisco. Then they headed to Chincha, which is also in the Ica region, for a lunch of sopa seca, or dry soup, which is spaghetti accompanied by hen along with glasses of La Diabla Pisco. They then visited the grape vines of the Mollar grape of Ernesto’s farm and visited the gravity press employed for doing a first grape pressing for the La Diablada. They drank Chilcanos and watched local dancers do a Peru-Afro performance of what is called Festejo, or the celebration. George was exhausted and ready when Melanie announced it was time to head to the hotel. 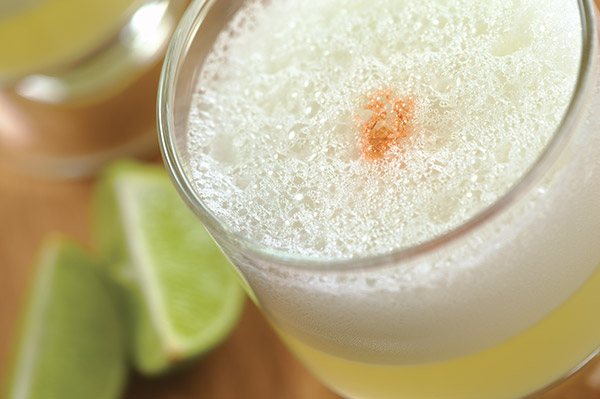 The next morning, Melanie had arranged a dune buggy tour in the tallest white sand dunes in the world, in Ica surrounding the oasis Huacachina. It was an amazing yet rather tumultuous ride and afterwards, everyone was more than ready for some Cuzquena beers at the nearby backpackers’ hangout.

Next stop was their much-anticipated visit to the Macchu Pisco distillery in Ica, where Melanie produces the wonderful pisco that George first experienced in his Pisco Sour at China Chilcano. He had the opportunity, since they were currently distilling, to try the fresh Pisco Quebranta right off the still. George learned that the new distillate was referred to as chicharrón, as it had a slightly smoky, fried pork aroma. He also learned that by law, Peruvian pisco must rest or age for a minimum of three months to allow these aromas and tastes to mellow.  George also got to try the fresh Italia grape, which is called cachina while it is still fermenting. They thanked the distillery manager for the tour and tasting, got loaded into the coach and headed to the Pisco Boulevard for lunch. 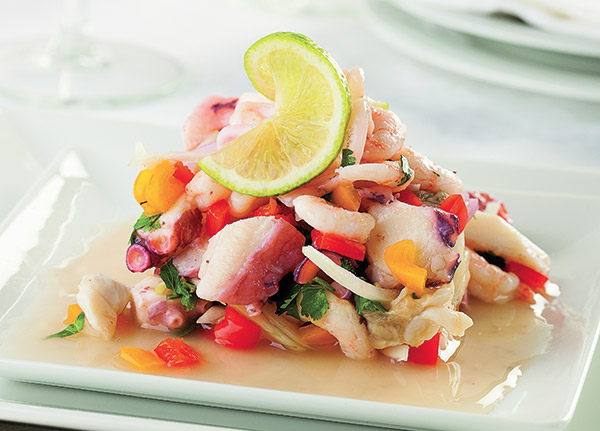 The Pisco Boulevard along the touristic Pisco Route (Ruta del Pisco) is a collection of artisanal bodegas and was where lunch at la Olla de Juanita was planned. They were served a virtual feast consisting of delicious pallares verdes (green lima beans) with avocado salad followed by Arroz con Pato y Papa a la Huancaina (duck and green rice with yellow pepper sauce over potatoes) and drank the wonderful pisco produced by Tres Generaciones and more Cuzquena beer.

After that hearty meal, George was ready to take a good siesta to get ready for the Jarana, or party, they were to attend that evening. The celebration, Cierre de campaña, was in honor of the closing of Macchu Pisco’s harvest season and revels in the closing of one chapter and the beginning of the next: the distillation of the wine.

After a much-needed nap, George was rested and excited for the evening festivities. When they arrived at the Jarana, Melanie led them to a large, open-air stone tank where several people were already stomping on grapes with their bare feet. They were instructed to remove their shoes and socks, roll up their pants and join in the revelries. It turns out this was a traditional feet pressing and they were pressing the Italia grapes that George’s group had harvested the day before. To keep everyone’s spirits in such a festive mood, they were served a drink called Perfecto Amor, which turned out to be combination of pisco and the sweet grape juice that had just been pressed. Yummy indeed! All the time a band played and people drank!

The Jarana was taking place at the artisanal bodega of Mocho Benavides, which Melanie explained she contracts to make Macchu Pisco. It was now time for dinner. The first course was something called causa, a dish of mashed Peruvian potato shaped in a roll with chicken and served with delicious Pisco Sours. That was followed by the main course, adobo de chancho, which is a simple but wonderful pork stew, and more Pisco Sours. The band played and everyone danced and drank celebratory glasses of pisco until late into the evening. Following the celebration, the after-party was at the bronze statue tribute to the Bruja de Cachiche (the good witch of Ica who cured a politician’s stutter and in commemoration of her, he built this statue for visitors to ask wishes from her). They all toasted the good witch and poured her some pisco at the foot of her statue as a contribution, a Peruvian tradition of offering Pachamama (Mother Earth) our gratitude. 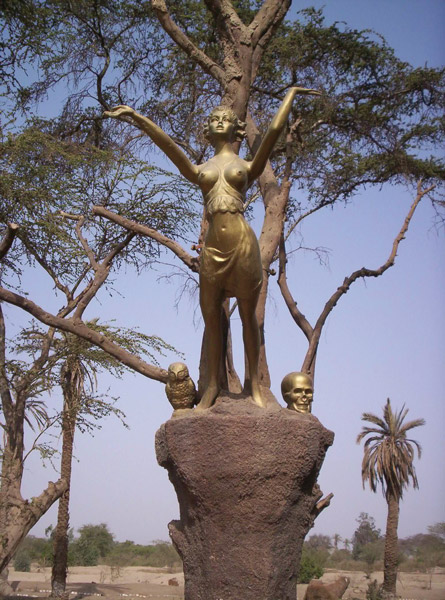 Everyone loaded back into the coach, passed around a bottle of La Diabla Pisco and slowly, one by one, most of the group fell asleep. Melanie informed George she had one more surprise for him. As they entered town, there was still a lot of activity and Melanie asked the driver to pull over at a bus stop. Melanie took George into a small, makeshift open-air restaurant where they had a traditional, late night meal consisting of an exotic chicken soup with the embryonic sack, called madre (mother, in slang). George found it to be interesting to say the least, but also very tasty although he did need a large bottle of Cuzquena beer to wash it all down. Afterwards, he was more than ready for a good night’s sleep!

The next morning everyone slept in before a quick breakfast and getting packed and loaded into the coach for the long ride back to Lima. George had booked a redeye out that evening but Melanie had promised a big night in Lima to send him off.

The first stop was the Maury Hotel, to meet a bartender named Eloy and have a couple of his Pisco Sours. It turns out that Eloy has worked at the Maury Hotel for 54 years and had made Pisco Sours for Ernest Hemingway. The Maury Hotel, one of the oldest drinking establishments in Peru, is where the Pisco Sour tradition has been preserved after the Morris bar closed with the passing of Victor Morris, the American who invented the Pisco Sour. Eloy’s Pisco Sours were amazing, and George felt they might have tasted even a little bit better drinking them in this historic bar.

Next, George and the crew headed to dinner at a Peruvian creole food restaurant, Brujas de Cachiche, specializing in pisco and traditional Peruvian food. They made a quick stop at the bar, which boasts the largest collection of piscos in Peru, with many dating back to the 1980s. The apéritif was a Coca Sour – pisco macerated in coca leaves, which is apparently totally legal in Peru. The group was then escorted to the private wine cellar where they were surrounded by botijas, the traditional ceramic vessels that were used to store and transport pisco. Here they had ceviche, conchas a la parmesan (sea scallops covered in parmesan cheese) and lomo saltado (filet mignon prepared wok style with tomatoes and peppers, served with potatoes and rice), and more Pisco Sours. 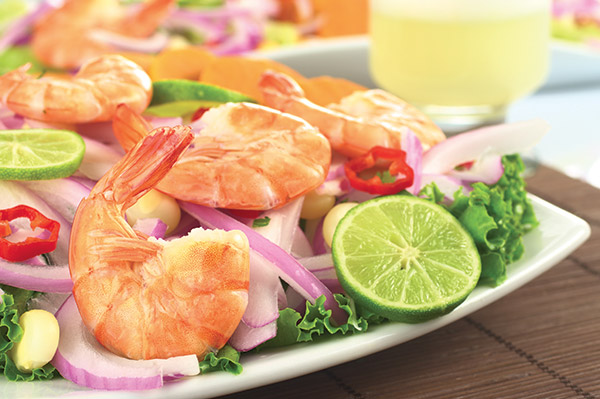 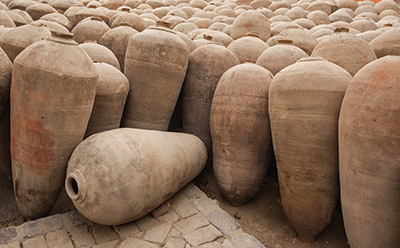 The evening had to come to an end, unfortunately, as George had a plane to catch but Melanie first poured one last glass of La Diabla. They raised their glasses and she made a simple toast, “To new friends! Salud!”

George said his goodbyes and headed to the airport with a full stomach and a happy glow. He knew he would miss his new friends but always cherish his fond memories of the time they spent in this very special place.