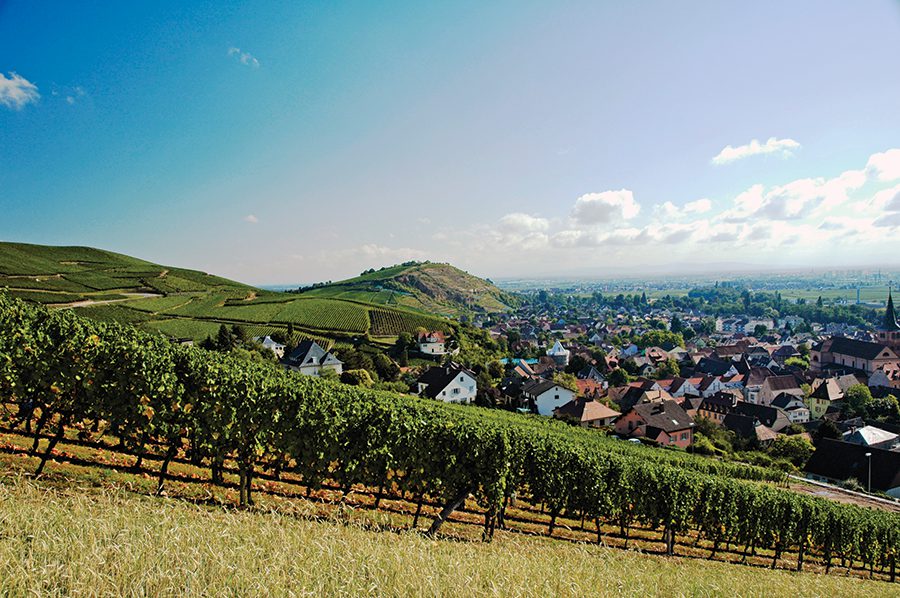 Having returned from an 11-day vacation trip to Alsace, my overall thoughts are still as fresh as its delightful wines in my mind. For those less inclined to spend a viticultural vacation: Trust me, there’s plenty for you as well.

Alsace has so much to offer visually, historically, culturally, gastronomically and viticulturally. Our Alsatian vacation included typical Alsatian gastronomy: foie gras; fresh water fish such as bass and pike; coq au Riesling; choucroute, flammenkuche or tarte flamblée; baeckeoffe; a potato, onion, lardon and muenster cheese gratin; sausages; bretzels; kugelhoff; and tarte aux myrtilles, among many others, all washed down with delightful and delicious
local wines.

With the quality level as high as it is, I will frame this article by trying to answer why it is that Alsatian wines are not more popular in the U.S. market. I believe it’s all about the sweetness level and the perception by many that if the wine is described as having any sweetness, even if not really perceptible, then its quality cannot be very high. Sommeliers are partially to blame as they decry residual sugar in wines and have put German wines on a pedestal, now that many are considered as bone dry. Consumers in the U.S. would love the wines of Alsace because, while they most frequently ask for dry wines, they might really prefer wines with some offsetting residual sweetness that isn’t very apparent. 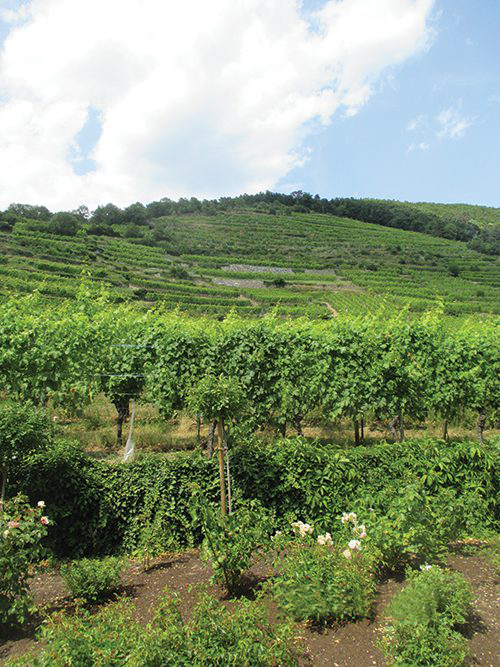 It used to be a truism that Alsatian wines were dry (with the exceptions of the late harvested and botrytized categories Vin Tardive and Sélection de Grains Nobles, respectively) and German wines were sweet. That has changed in the last 20 years. Why? It’s the winemakers’ response to the impact of global warming. Winemakers try to produce balanced wines and when faced with piercingly acidic wines, they found the best way to achieve that is to leave offsetting residual sweetness so that the wine tastes balanced. With greater warmth in the marginal climate of Mosel, Rheingau and other famous German regions, grapes are now being harvested with both a higher concentration of sugar and a corresponding drop in acidity levels. Thus, there’s less need for the former balancing act.

In Alsace, which is across the Rhine graben, or trench, facing the German Baden wine region to the east, the weather is semi-continental but very dry. It’s the second driest region of France because it lies in the rain shadow of the Vosges Mountains to its west. (The dryness of this region also has enabled many producers to use organic practices and take the lead in biodynamic farming.) Growers used to leave grapes on the vine for as long as possible to increase the phenolic and flavor ripeness without worrying about the sugar levels getting too high. With the rise in temperature, this is now a challenge, resulting in many of the 1,200 producers producing a broad spectrum of sweetness in wines, which confuses consumers. 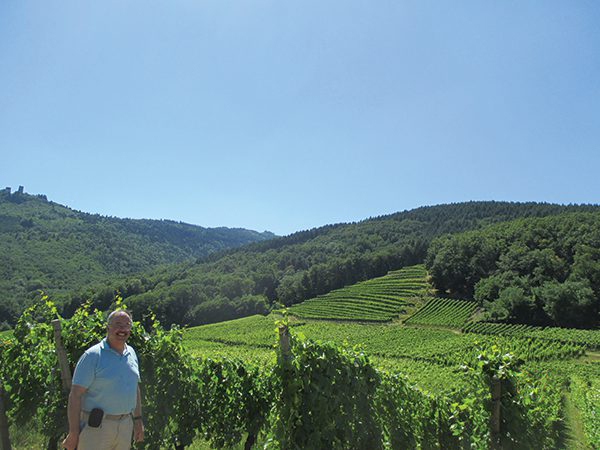 Alsace has an ancient winemaking history, with the earliest written reference dating back to A.D. 2. By the end of the ninth century, there were 160 villages documented as producing wines. The height of Alsace’s prosperity was the mid-Renaissance in the 16th century, when it was part of a German principality. The quaint villages reflect that era, as one walks by street after street of still-occupied houses built in the late 15th and early 16th centuries. Villages are also beautifully decorated in public and private spaces with flower boxes and plantings. Its history is replete with wars primarily fought between Germanic principalities and the French, and the most devastating in many ways was the Thirty Years’ War between Protestants and Catholics. When the Germans annexed Alsace in 1871, the area was planted with high-yielding and low quality hybrid grapes, thanks to phylloxera. Surprisingly, the Hitler Youth did Alsace a huge favor when they ripped out 75 percent of the vineyards in 1942. It is not until 1962 that Alsace begins to be recognized for quality wine, when it becomes an AOC. 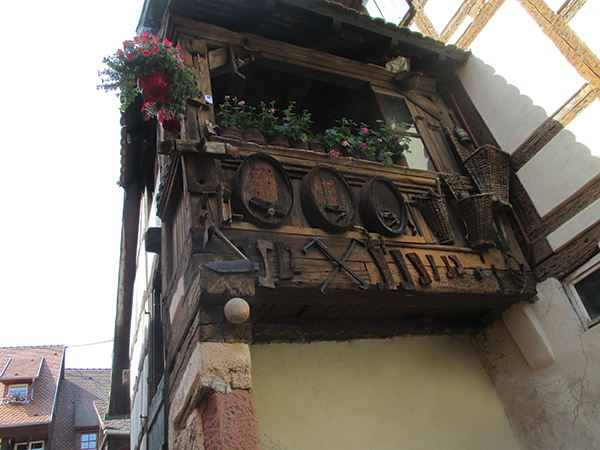 A Unique and Complex Terroir

Alsace has one of the world’s most northerly wine regions, with approximately 37,000 acres of wine located on a narrow band running 75 miles from north to south and 1.5 to 3 miles wide. It lies, for the most part, on east- and southeast-facing slopes (similar to Burgundy) at 600 to 1,320 feet in elevation on the slopes of the protecting Vosges Mountains. It has one of the most complex varieties of soils in France (13 major types) due to the huge uplift some 300 million years ago, which was then followed by the inundation of an enormous inland sea. Subsequently, 50 million years ago, the area was subjected to further upheavals and buckling, with multiple fault lines resulting in a huge trench that is now the Rhine valley. The Black Forest Mountains, some 70 miles to the east, were part of the same Vosges Mountains. The soils include limestone, marl, loess, schist, volcanic, granitic, sedimentary and the famous pink sandstone, from which the 1,000-year-old cathedral of Notre Dame in Strasbourg is made. The soil is particularly of interest, as leading producers try to match soils to varieties and determine to a great degree the particular impact that they have on the resulting wines.

Alsace is subdivided into two zones: the Haut-Rhin and the Bas-Rhin. The Haut Rhin has the preponderance of production (60 percent) and is more sheltered than the more northerly Bas-Rhin. There are three AOCs (AOPs) in Alsace: Alsace AC, Alsace Grand Cru and Crémant d’Alsace. The wines, like in Germany, are mostly varietally driven and, with few exceptions, must be 100 percent of that variety. You may also easily find a bottle of Edelzwicker or Hugel’s Gentil here in the U.S., the latter being a white blend that has noble grape inclusion requirements. Both are delightful apéritifs and great values. Ninety percent of AC wines are white, though its formerly almost-red Pinot Noirs are ripening enough to provide both depth of color and flavor. Alsace’s total production is 12.5 million cases and represents 18 percent of France’s AC still white wine production.

The varietals include the four “noble” ones: Riesling, Pinot Gris, Muscat and Gewurztraminer (without the umlaut, or two dots over the ü) and others including Chasselas, Sylvaner, Pinot Blanc, Pinot Noir, Klevner de Heiligenstein (Savagnin rosé). Chardonnay is grown but limited to crémants. The four “noble” grapes reach an apogee of quality in Alsace that few if any regions can match. The AC regulates the maximum residual sugar to nine grams per liter (threshold for most is between nine and 10 but doesn’t taste sweet; brut Champagne has up to 12g/liter). The 51 Grand Cru vineyards do not have such restrictions so their wines are more frequently off dry, though offset by acidity due to the high diurnal range augmented by the cooling effect of the pine and oak forests of the Vosges. Grand Cru production equals less than four percent of the total, but one of the joys of being there was my ability, at every restaurant we frequented, to enjoy Grand Cru wines by the glass – many of which I hadn’t previously had the opportunity to enjoy or assess. 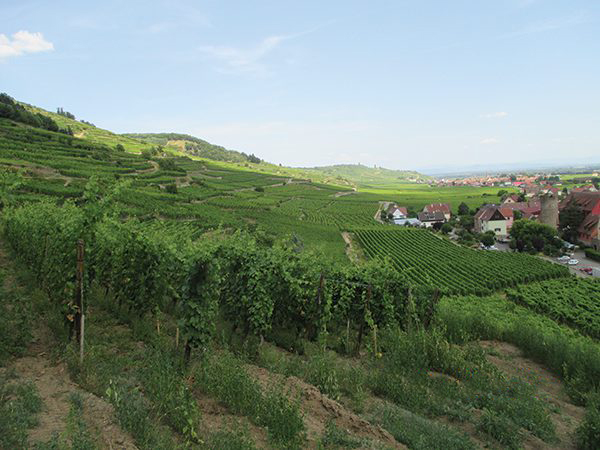 It should be noted that some of the traditional négoçiants who have been in the wine trade since the 17th century, such as Hugel and Trimbach, eschew the Grand Cru designation and prefer to use a single vineyard lieux-dits or namesakes, such as Hugel’s Riesling Schoelhammer (2007) or Clos Ste-Hume located in the Rosacker Grand Cru. Other examples include Domaine Weinbach’s Clos des Capuchins in the Schlossberg Grand Cru, or Roger Muré’s Clos Saint-Landelin in the Vorbourg Grand Cru. Other top producers such as Ostertag, Zind Humbrecht, Marcel Deiss and Domaine Schlumberger are also among my favorites. Regardless, I was able to explore the subtleties of the Grands Crus and was able to explore how soils variations impacted the structure and flavors of Alsatian wines. While these wines are more expensive than the AC wines, their price value is far greater than wines from other prime wine growing regions of the world and deserve to be on your menus, especially as they are so food friendly.

The AC wines present greater value, whether from the above named négoçiants or such grower co-ops as Cave de Turckheim, located in the granitic soils of the eponymous village. The style at the AC level – whether Riesling, Pinot Gris, Gewurztraminer or Pinot Blanc – is typically dry. It is only when trying their great value Brand vineyard Grand Cru, that one will encounter a mouth-filling richness offset by minerality, crispness and refreshing acidity. In 2011, two complementary designations were included in Alsace AC: communal designations, of which 11 are allowed, and lieux-dits (namesakes).

In 1976, the Crémant d’Alsace AC was created – a sparkling wine made in the traditional method and a bright spot in the Alsace trade, given its meteoric rise and accounting for 23 percent of production. Seventy-five percent is consumed in France, which is no surprise as it is a great value quality sparkling wine. Many producers are, thankfully, available in the U.S. and present the consumer with plentiful choices, either as blanc de blancs or as rosés. Producers such as Lucien Albrecht, Dopff & Irion, Willm, or Mayerling will enhance your customers’ experience at great price value and grow your sparkling wine sales, which invariably has a commensurate rise in consumer appreciation of their dining experience – it’s the magic of bubbles. Not only do Alsatian wines pair with so many continental cuisines, they are unrivalled when paired with Asian style cuisines! So do your customers a favor and let them enjoy the experience of Alsace through a glass of wine. You will be well rewarded by their
appreciative reactions.